Today on Training Tip Tuesday we are talking about safety. Most people don’t consider running to be a dangerous activity and for the most part it isn’t, but there are some things runners need to keep in mind while out there on the roads or trails. Today I’m sharing 5 Running Safety Tips that I have found most important to keep my runs safe and fun. 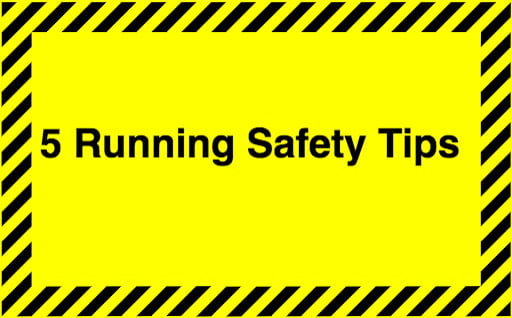 I can’t tell you how many runners I’ve seen or rather not seen running at night or in the early morning in dark clothing. Bad idea folks. By the time a driver sees you they are right up on you. Running isn’t meant to be a fashion statement, it’s better to be wearing bright neon colors that look fresh out of the 80’s than to be wearing black and have a driver hit you. Wearing material that is bright and reflective can be the difference between completing your run and ending up in the hospital.

This tip I am guilty of not following for a very long time. It wasn’t until a few years ago that I started wearing an ID bracelet when I ran. In retrospect I think back to all the years I ran without carrying any type of ID and how stupid that was. What if I fell or passed out, how would anyone know who I was or who to call and let know I was hurt?! Stupid, stupid, stupid! Fortunately I wised up. Now whenever I go out running I wear a Road ID. I absolutely love these bracelets because not only does it have your name and where you live, but you can also list emergency contacts and any medical conditions or allergies you might have. After my stint in the hospital and being put on Coumadin, this was pretty important for me to have listed on mine. The ID’s don’t cost that much and 100% worth getting.

I’m sure this tip is a controversial one, but in my opinion running with headphones is dangerous. Not only is it dangerous to you, but to other runners as well. When you have headphones on how are you going to hear if someone is coming up behind you. You are making yourself susceptible to being attacked when you dull your senses by putting headphones on. Headphones also make it hard to hear if another runner, biker, or walker is coming up behind you and wants to pass by. Now you are putting yourself and the other person at risk for a collision. Use your time running as a way to unplug from music and technology, not only is it more relaxing, but safer as well.

While wearing clothing that makes you more visible is important, it is even more important to assume that cars don’t see you. I have had numerous close calls with cars in crosswalks, driveways, and pulling out onto a major street from a neighborhood or shopping center. Even if you are following all the rules, often times drivers won’t check blind spots or look both ways before they start to turn. Then you have my favorite kind of drivers who make a right hand turn into the crosswalk even when it’s your turn to cross. Over the years I have learned to make eye contact with drivers before I cross in the crosswalk or in front of their car. If a driver doesn’t look both ways before turning out of a neighborhood I either wait for them or run behind their car. I know it doesn’t seem fair to let them have the right away, but I’d rather be annoyed with the situation than lying on the hood of their car.

This tip is one where if you find yourself in an area that doesn’t feel safe, you trust that uncomfortable feeling in your gut, and get the hell out of there. I’m sure you’ve had that feeling where you find yourself running in an unfamiliar, unlit, deserted, or just plain creepy area, and you get that creeping sense of fear that tells you you shouldn’t be there. Trust that fear and get away from there as fast as you can. Stick to running in areas that are populated, well lit, and not run down. If you are out on a trail avoid areas that are overgrown, you never know what or who could be hiding in those tall bushes.

There are so many things to keep in mind while you are out running in order to stay safe. For me, these 5 tips are the ones that are most important. What other safety tips are important to you? I’d love to hear what makes you feel safe out there!

This website uses cookies to improve your experience while you navigate through the website. Out of these, the cookies that are categorized as necessary are stored on your browser as they are essential for the working of basic functionalities of the website. We also use third-party cookies that help us analyze and understand how you use this website. These cookies will be stored in your browser only with your consent. You also have the option to opt-out of these cookies. But opting out of some of these cookies may affect your browsing experience.
Necessary Always Enabled
Necessary cookies are absolutely essential for the website to function properly. These cookies ensure basic functionalities and security features of the website, anonymously.
Functional
Functional cookies help to perform certain functionalities like sharing the content of the website on social media platforms, collect feedbacks, and other third-party features.
Performance
Performance cookies are used to understand and analyze the key performance indexes of the website which helps in delivering a better user experience for the visitors.
Analytics
Analytical cookies are used to understand how visitors interact with the website. These cookies help provide information on metrics the number of visitors, bounce rate, traffic source, etc.
Advertisement
Advertisement cookies are used to provide visitors with relevant ads and marketing campaigns. These cookies track visitors across websites and collect information to provide customized ads.
Others
Other uncategorized cookies are those that are being analyzed and have not been classified into a category as yet.
SAVE & ACCEPT
8 shares