There’s no deep-frying required to enjoy these crispy oysters! These Crispy Cajun Baked Oysters with Sweet and Spicy Dipping Sauce are the perfect appetizer for oyster lovers and adventurous eaters to enjoy at their next party!

Thanks to Chicken of the Sea for sponsoring this post. I was provided with product for the purpose of this post, as well as compensation for my time. As always, all opinions are my own. 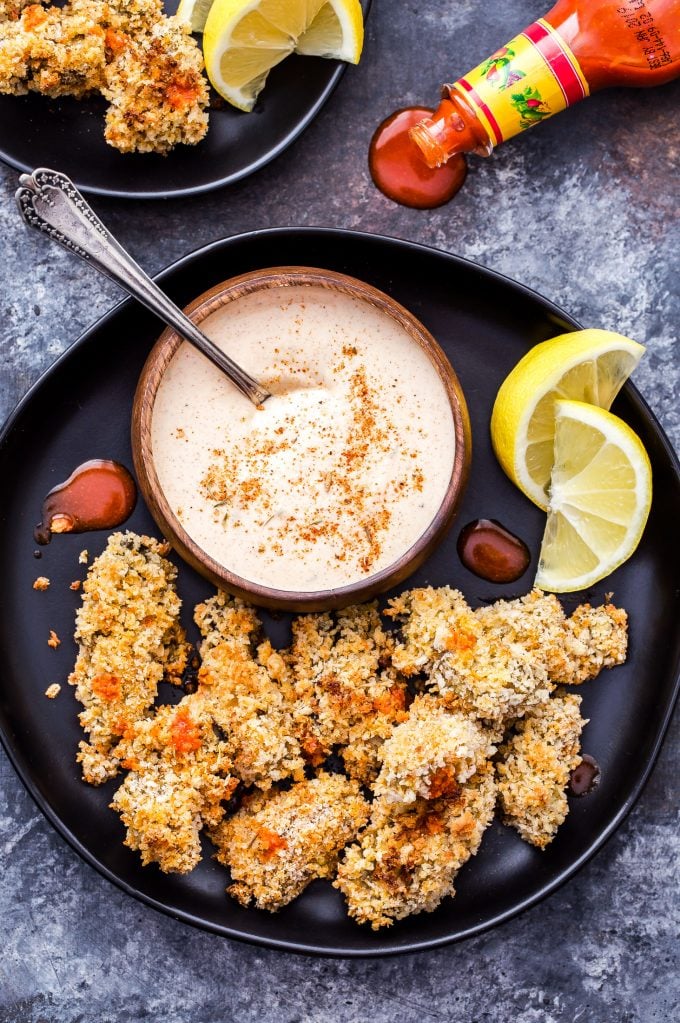 There are certain foods that people either tend to love or hate. For the most part I don’t really have many food aversions. My biggest one is raw onions, just gag me! Some of the top love/hate foods include; cilantro (I’m most definitely team love), briny foods such as olives or pickles, bananas, black licorice, blue cheese and oysters to name a few.

Let’s focus on oysters, since today I’m sharing a recipe for Crispy Cajun Baked Oysters with Sweet and Spicy Dipping Sauce. The first time I tried oysters was during a blogger retreat in Florida. I’m not gonna lie, I was scared to death that I’d take one bite and have to spit the whole thing back out. Much to my surprise I didn’t spit it out and actually really enjoyed it and ended up eating several more. These oysters were baked, which I have a feeling is why I liked them. If they had been raw I’m not sure I could have stomached the texture. Texture is huge when it comes to how we perceive certain foods.

When Chicken of the Sea approached me about creating a recipe using their whole oysters I was a little intimidated. Oysters are something I’d never worked with and I wasn’t quite sure the best way to present them in an appealing way to both oyster lovers and those who might be afraid to try them. After thinking back to those baked oyster in Florida, I decided that a crispy coating and a flavorful dipping sauce were the perfect way to introduce oysters to those who were new to them. 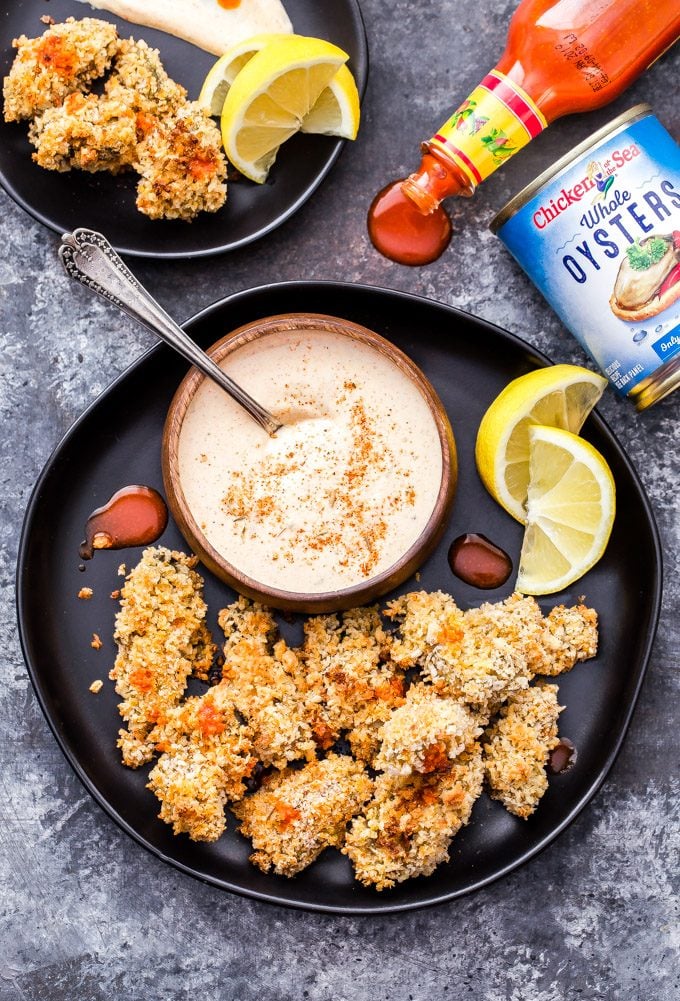 Since fresh oysters aren’t really an option here in Denver, the Chicken of the Sea whole oysters were the perfect substitution. They’re affordable and I didn’t have to worry about foodborne illnesses which can often be a concern for people with raw oysters. I love that Chicken of the Sea is a company that is always working for more responsibly sourced goods that will have less environmental impact. 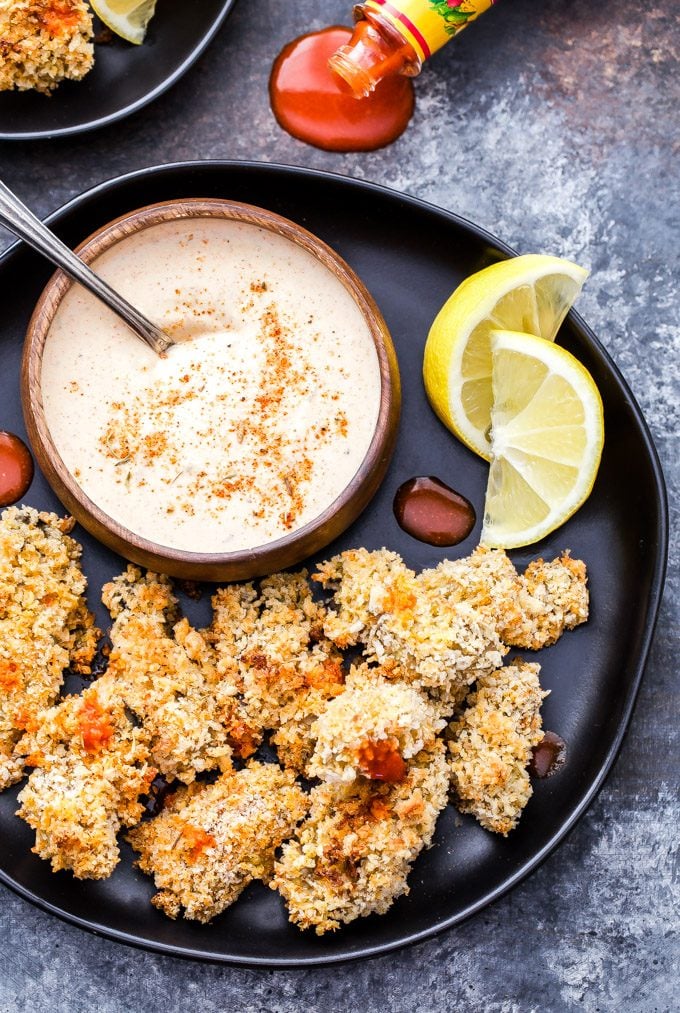 Here’s what to expect with flavor when you make these Cajun baked oysters. A super crisp coating with plenty of spicy Cajun flavor, followed by the burst of salty, meatiness of the oyster. You might also detect a little creaminess in the oyster’s texture and some mineral or metallic flavors. The dip really enhances the Cajun flavors and is a nice balance of sweetness and heat.

For extra heat, shake on some extra hot sauce and for a burst of fresh acidity a squeeze of fresh lemon juice does the trick. Be adventurous this holiday season and give these Crispy Cajun Baked Oysters with Sweet and Spicy Dipping Sauce a try!

This website uses cookies to improve your experience while you navigate through the website. Out of these, the cookies that are categorized as necessary are stored on your browser as they are essential for the working of basic functionalities of the website. We also use third-party cookies that help us analyze and understand how you use this website. These cookies will be stored in your browser only with your consent. You also have the option to opt-out of these cookies. But opting out of some of these cookies may affect your browsing experience.
Necessary Always Enabled
Necessary cookies are absolutely essential for the website to function properly. These cookies ensure basic functionalities and security features of the website, anonymously.
Functional
Functional cookies help to perform certain functionalities like sharing the content of the website on social media platforms, collect feedbacks, and other third-party features.
Performance
Performance cookies are used to understand and analyze the key performance indexes of the website which helps in delivering a better user experience for the visitors.
Analytics
Analytical cookies are used to understand how visitors interact with the website. These cookies help provide information on metrics the number of visitors, bounce rate, traffic source, etc.
Advertisement
Advertisement cookies are used to provide visitors with relevant ads and marketing campaigns. These cookies track visitors across websites and collect information to provide customized ads.
Others
Other uncategorized cookies are those that are being analyzed and have not been classified into a category as yet.
SAVE & ACCEPT
Skip to Recipe
880 shares