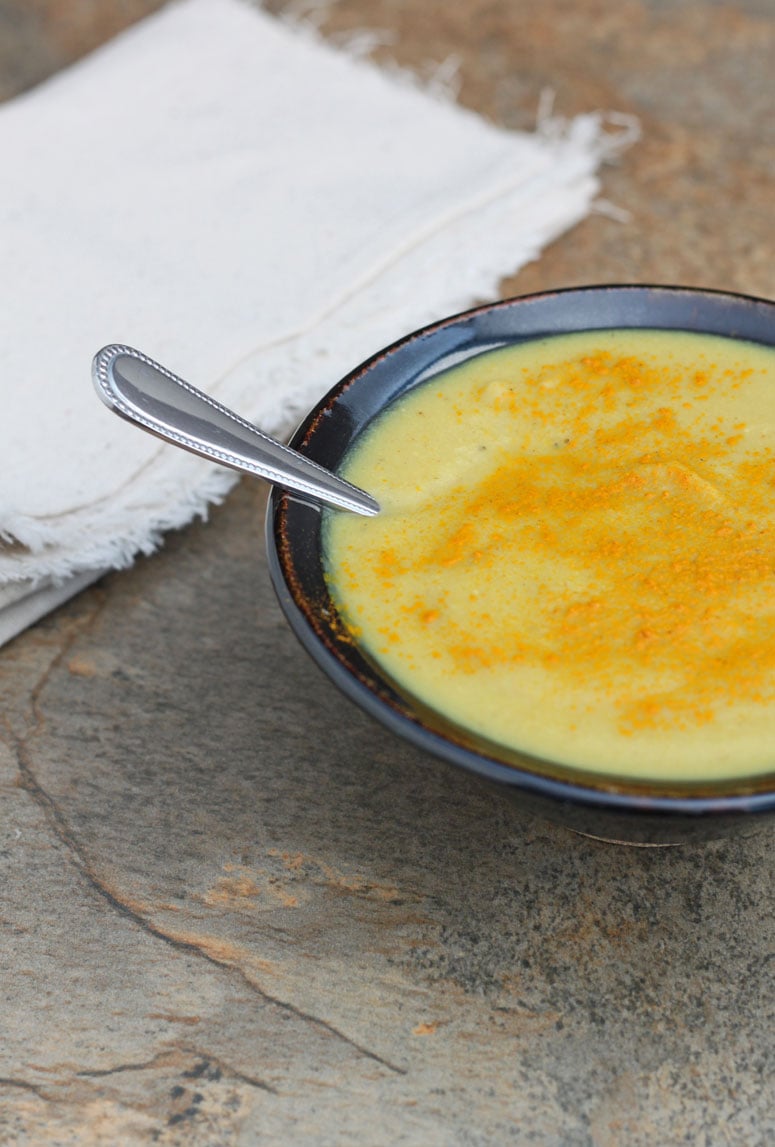 It’s by far one of my favorite vegetables, which is strange because growing up I never really cared for it. I think cauliflower got a bad reputation when I was a kid because for the most part it was just steamed and served on a plate next to the other vegetable I didn’t like, broccoli. However, cauliflower is making a comeback and becoming quite the trendy vegetable. 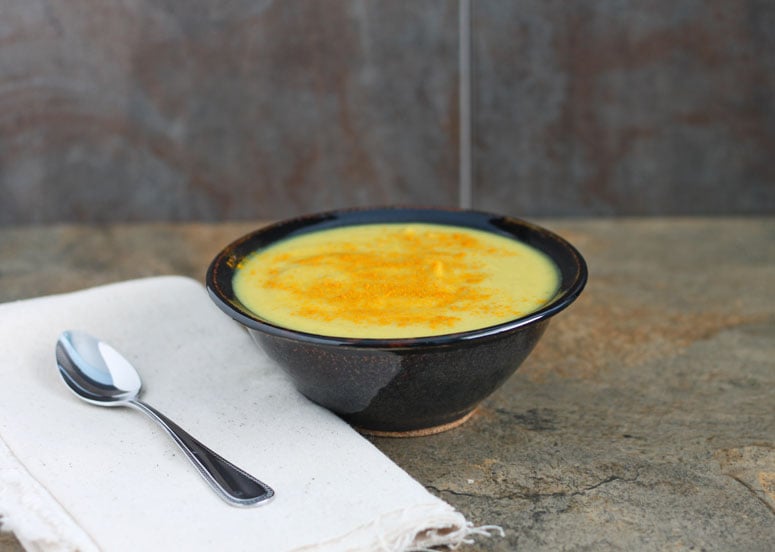 I occasionally still steam cauliflower as a side dish for dinner, but that’s only when I’m feeling lazy. My favorite ways to eat cauliflower are mashed and pureed with some garlic and topped with parmesan cheese, roasted with different spices, and pulsed up into rice size pieced and used a replacement for rice. I find this method is particularly good with stir fry. Since I’m so in love with this vegetable I though I would try making curried cauliflower soup with it. 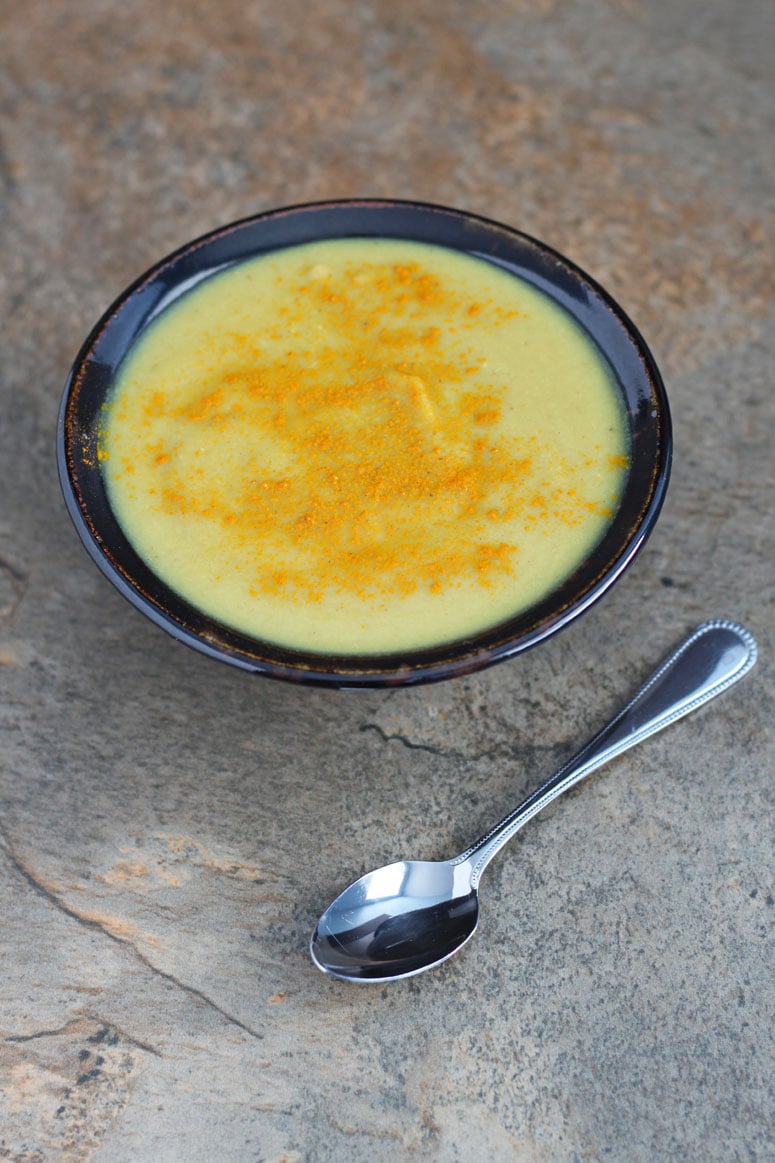 I’m a big fan of soup this time of year. It smells heavenly when it’s cooking and warms you up instantly when you eat it. I decided to add curry to this cauliflower soup to give it a little twist. I don’t cook using curry too often, but something about this warm exotic spice sounded appealing in my soup. To make the soup I sauteed a cup of diced onion and three cloves of garlic. Once they were softened and fragrant I added in 2 pounds of chopped cauliflower. Costco sells the perfect sized bag for this soup and the best part is it’s already cut for you! I then added my spices; curry powder, cumin, and coriander. I let them cooking in the pot for a couple minutes and then added in 2 cans of vegetable broth (chicken broth works too). I covered the pot and let the cauliflower simmer in the broth for about 20 minutes, until it was very soft and falling apart. To get this soup nice and creamy I used an immersion blender to puree the soup. You can use a regular blender, but I find the immersion blender much easier, plus no chance of the lid popping off while you are blending the soup. The finishing touches of this curried cauliflower soup were a 1/4 cup of light coconut milk and a 1/4 cup of non fat plain Greek yogurt. Both were added off the heat so they wouldn’t curdle and both of them gave the soup an extra rich and creamy flavor. 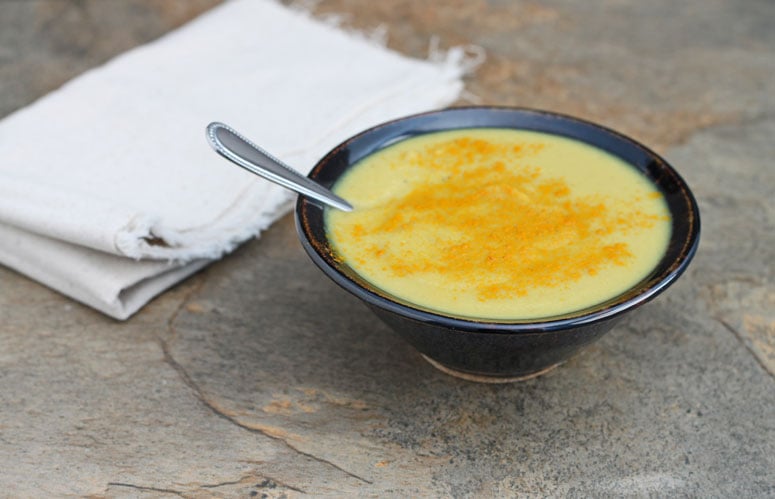 If you wanted to make this soup vegan, simply leave out the Greek yogurt. This curried cauliflower soup is very filling and is perfect served with a salad, grilled chicken, or some toasted bread. If you are a fan of curry and cauliflower this soup will not disappoint!

To make this soup vegan simply leave out the Greek yogurt.

This website uses cookies to improve your experience while you navigate through the website. Out of these, the cookies that are categorized as necessary are stored on your browser as they are essential for the working of basic functionalities of the website. We also use third-party cookies that help us analyze and understand how you use this website. These cookies will be stored in your browser only with your consent. You also have the option to opt-out of these cookies. But opting out of some of these cookies may affect your browsing experience.
Necessary Always Enabled
Necessary cookies are absolutely essential for the website to function properly. These cookies ensure basic functionalities and security features of the website, anonymously.
Functional
Functional cookies help to perform certain functionalities like sharing the content of the website on social media platforms, collect feedbacks, and other third-party features.
Performance
Performance cookies are used to understand and analyze the key performance indexes of the website which helps in delivering a better user experience for the visitors.
Analytics
Analytical cookies are used to understand how visitors interact with the website. These cookies help provide information on metrics the number of visitors, bounce rate, traffic source, etc.
Advertisement
Advertisement cookies are used to provide visitors with relevant ads and marketing campaigns. These cookies track visitors across websites and collect information to provide customized ads.
Others
Other uncategorized cookies are those that are being analyzed and have not been classified into a category as yet.
SAVE & ACCEPT
Skip to Recipe
171 shares