Saturday I ran the Phoenix Half Marathon. This was my second time running in it. Last year when I ran I had a great time and got a new half marathon personal record (PR). My goal this year was once again to get a new PR. The goal time I set for myself was 1:35. This was going to be a fairly big chunk of time to take off from last year (over 2 minutes), especially considering the course route had changed and didn’t have nearly the amount of downhill as it did the year before. However, after talking to my coach who is also my sister, we both agreed this was doable and a good goal time. My training had been going well except for a few weeks in January where I was sick with a chest infection. After a round of antibiotics I was back to feeling good and training hard. Another concern I had going into the race was a persistent tight hamstring that just wouldn’t/won’t stay loose. Even though I always manage to work through the tightness and pain of it, it still weighs on my mind the closer it gets to race day. 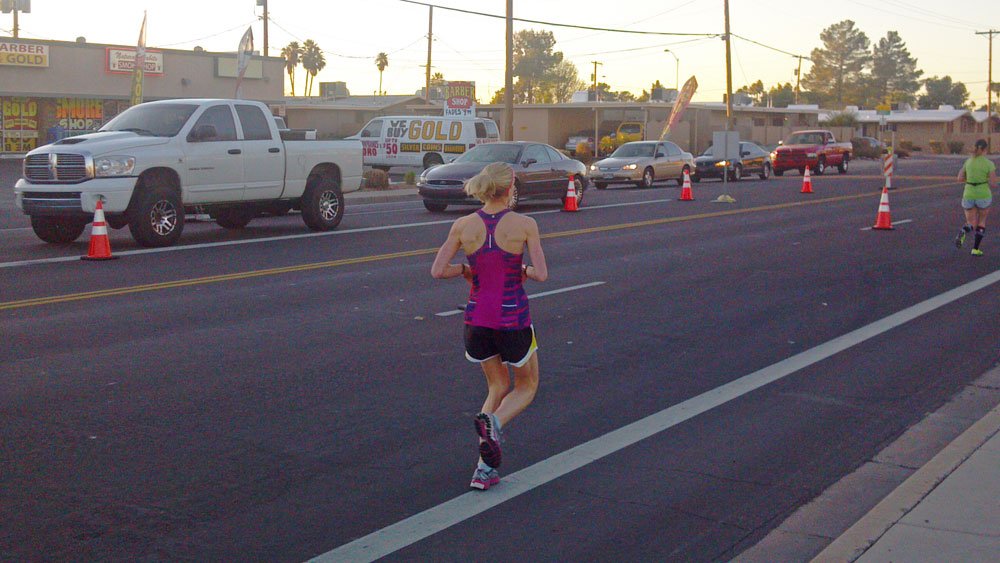 So, race morning arrives. I get up just before 4:00….that would be A.M., so I can be to the bus pick up at 5:00. I had my two pancakes and half a banana, did some rolling on my foam roller, and then we were out the door. I just want to thank my husband right here for getting up that early to drive me to the buses and then cheering me on during the race!

Before the race I was pretty relaxed. The only stressful part which is always the case for me is the Disneyland length line to use the port-a-potty! I don’t understand how these lines can be so long! After that lovely wait I had just enough time to do my warmup run and stretching. Then the gun went off and all my worries went away.

As usual I started out too fast, but after that first mile I settled into what would be considered a strong tempo pace for me. I maintained that pace give or take a few seconds for about eight miles. When I hit mile nine it was time to pick up the pace and start the hard work. I was surprised how mentally strong I felt going into the last four miles. There was an aid station around mile ten or so that was playing Michael Jackson music and encouraging the runners. I can’t stress how helpful it is to have people cheering and motivating you to keep going. Suddenly mile eleven was staring me in the face, this was it, last two miles, they were going to be fast! I found myself talking out loud (luckily no one was nearby) saying GO! Make your coach proud! Make yourself proud! That was exactly what I did!

I passed two more girls on my sprint to the finish and clocked in with a time of 1:33:43. I couldn’t have been happier. After catching my breath and deciding I wasn’t going to puke from the all out sprint to the finish, I found myself smiling ear to ear! I’d done it, I’d achieved one of my goals for 2013!

This website uses cookies to improve your experience while you navigate through the website. Out of these, the cookies that are categorized as necessary are stored on your browser as they are essential for the working of basic functionalities of the website. We also use third-party cookies that help us analyze and understand how you use this website. These cookies will be stored in your browser only with your consent. You also have the option to opt-out of these cookies. But opting out of some of these cookies may affect your browsing experience.
Necessary Always Enabled
Necessary cookies are absolutely essential for the website to function properly. These cookies ensure basic functionalities and security features of the website, anonymously.
Functional
Functional cookies help to perform certain functionalities like sharing the content of the website on social media platforms, collect feedbacks, and other third-party features.
Performance
Performance cookies are used to understand and analyze the key performance indexes of the website which helps in delivering a better user experience for the visitors.
Analytics
Analytical cookies are used to understand how visitors interact with the website. These cookies help provide information on metrics the number of visitors, bounce rate, traffic source, etc.
Advertisement
Advertisement cookies are used to provide visitors with relevant ads and marketing campaigns. These cookies track visitors across websites and collect information to provide customized ads.
Others
Other uncategorized cookies are those that are being analyzed and have not been classified into a category as yet.
SAVE & ACCEPT
0 shares