So remember how I was oohing and ahhing over the wonderful weather we were having this past weekend? Well it stayed beautiful until Wednesday night. Then, out of nowhere I was upstair in our bedroom and it sounded like someone was throwing rocks at the window. It kept getting louder and louder and then there was thunder! What the heck Colorado! It was sunny and warm all day and now it was hailing, windy, and cold. When I got up the next morning I was less than thrilled to see snow on the ground and read that the temperature was only 24, but with the wind felt like 17. Awesome…this was going to make for an interesting run. I ran 5 miles on my treadmill until it was light out and warmed up slightly (about 3 degrees). I then put on my warm running clothes and headed outside. I wasn’t sure what to expect, but knew I needed to run another 5 miles. When I started it wasn’t too bad, but then I hit the first patch of ice…great, this was going to be a slow and cautious run. I then turned the corner and was blasted with the 17 mph wind, yeah that felt good! The next 2 miles were like trying to push a wall as I ran. Then came the real fun part. The light snow from the night before had left a good layer of powder covering up the crunchy ice. The wind and powder got together and decided it would be fun to blow it everywhere. Snow does not feel good hitting your face, it feels like sand hitting you, only this is frozen sand! By the time I finished my last 5 miles I had hands that were so numb I could barely curl my fingers, my face was stinging from the cold, and my legs were not impressed with my not so graceful way of running through icy, crunchy, snow. I took a hot shower immediately to defrost and then I was starving. I wanted something warm so I decided to make these spinach and roasted red pepper baked eggs. 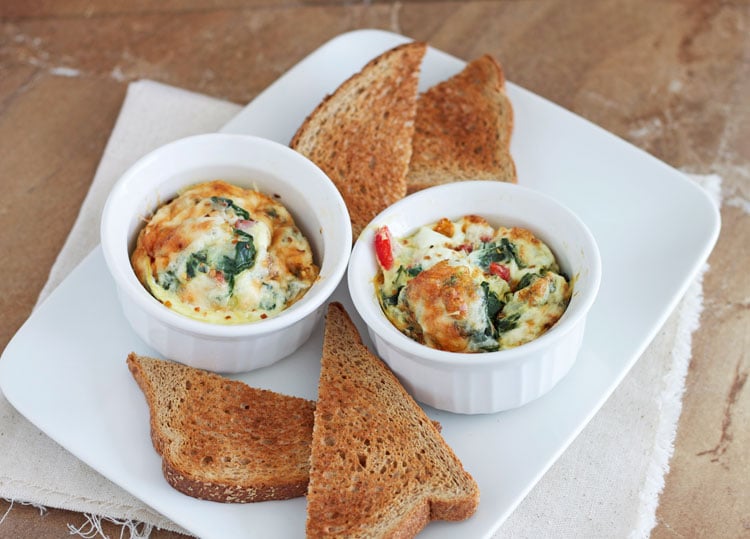 They were just what I needed to warm up and get my energy back. To make them I sprayed a pan with cooking spray and quickly sautéed the spinach and diced roasted red pepper with a little salt and pepper. 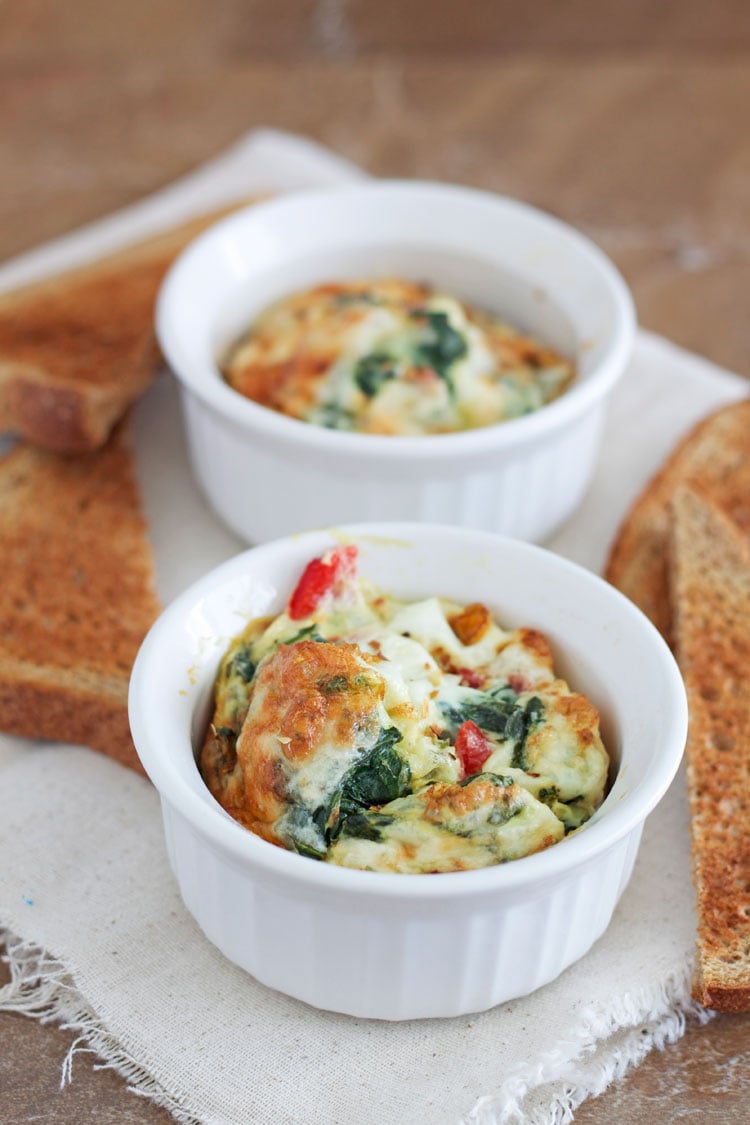 While that cooked I sprayed two ramekins with cooking spray. I then cracked 6 eggs, I was making these using only the egg whites, so 3 egg whites per ramekin. I whisked a pinch of salt and a teaspoon of half and half into the egg whites. 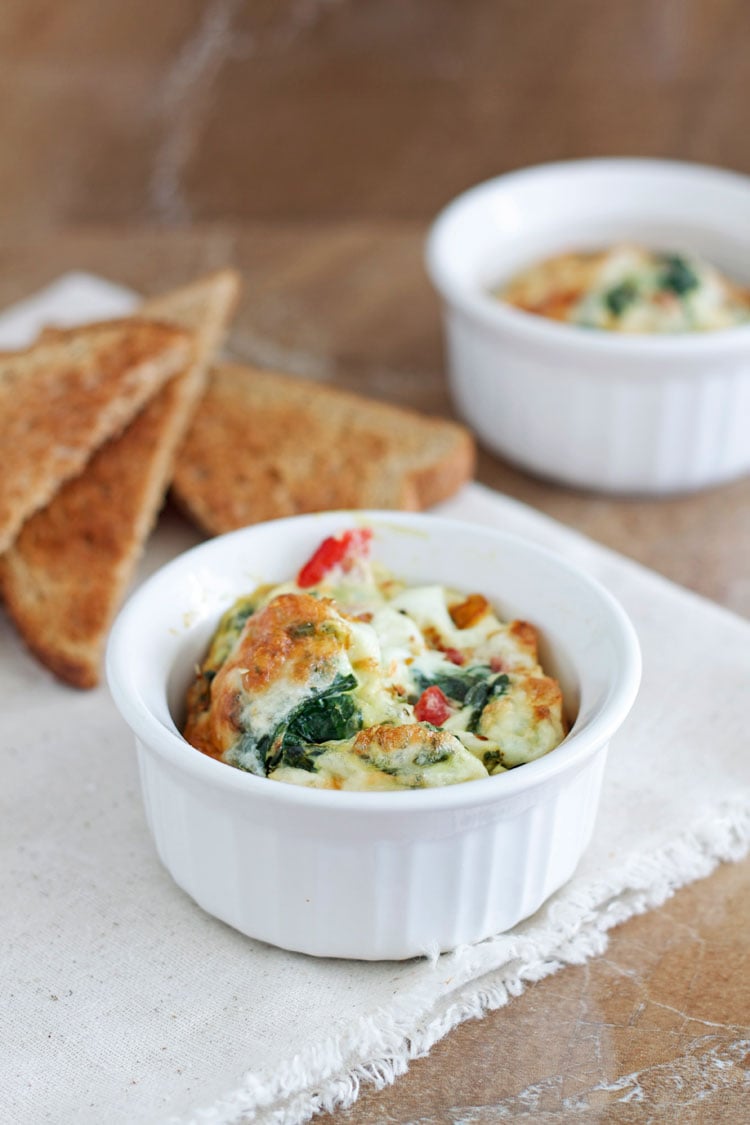 I then took my spinach and pepper mixture and divided it into the two ramekins. I then divided the egg mixture evenly between the ramekins. I finished each of them off with a tablespoon of grated parmesan cheese and a pinch of red pepper flakes. They baked in the oven for about 25 minutes and when they came out they were puffed up and golden on top. They tasted amazing! 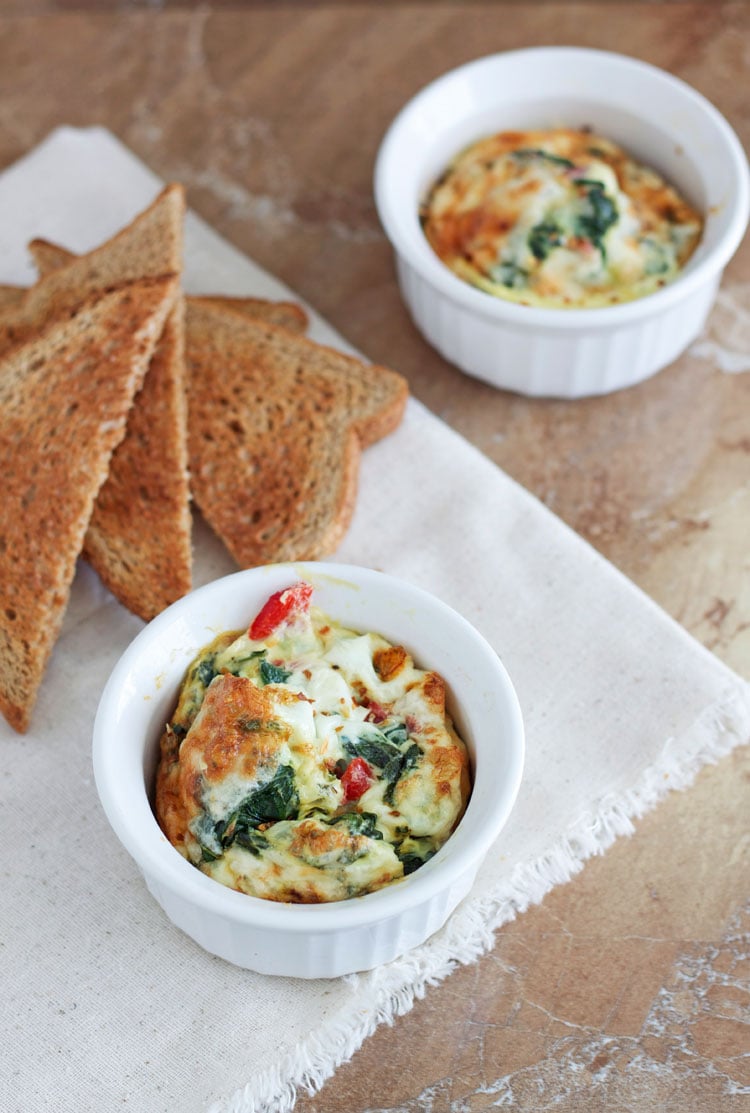 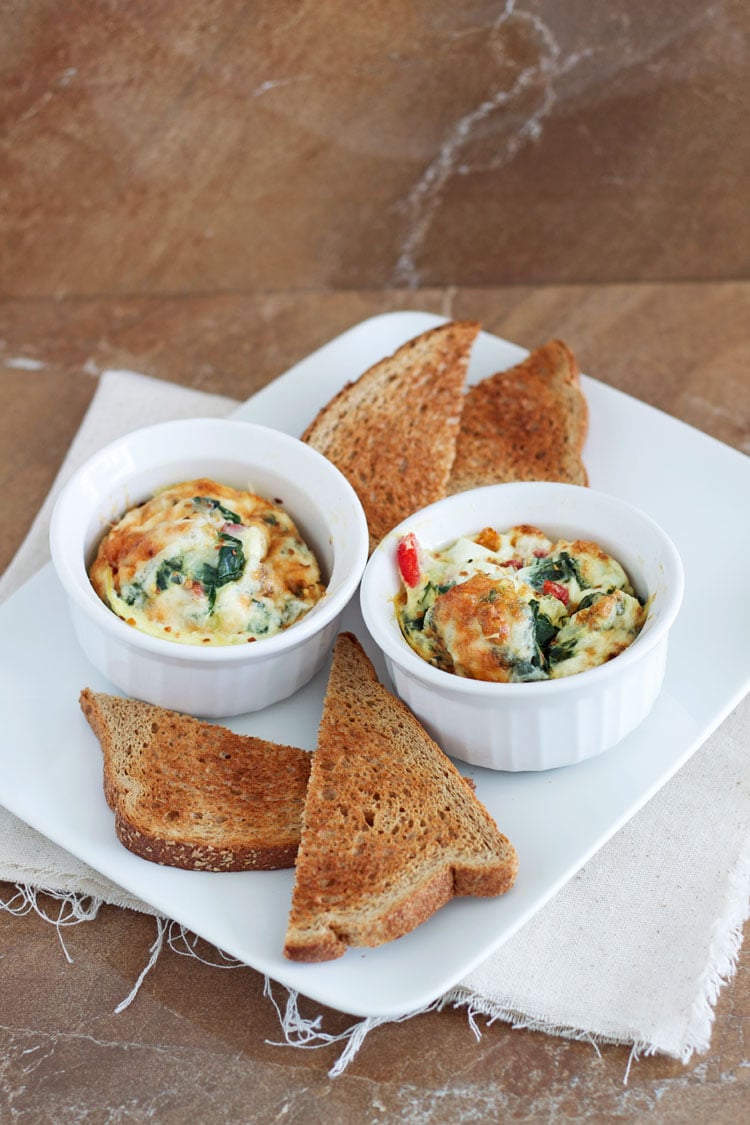 This website uses cookies to improve your experience while you navigate through the website. Out of these, the cookies that are categorized as necessary are stored on your browser as they are essential for the working of basic functionalities of the website. We also use third-party cookies that help us analyze and understand how you use this website. These cookies will be stored in your browser only with your consent. You also have the option to opt-out of these cookies. But opting out of some of these cookies may affect your browsing experience.
Necessary Always Enabled
Necessary cookies are absolutely essential for the website to function properly. These cookies ensure basic functionalities and security features of the website, anonymously.
Functional
Functional cookies help to perform certain functionalities like sharing the content of the website on social media platforms, collect feedbacks, and other third-party features.
Performance
Performance cookies are used to understand and analyze the key performance indexes of the website which helps in delivering a better user experience for the visitors.
Analytics
Analytical cookies are used to understand how visitors interact with the website. These cookies help provide information on metrics the number of visitors, bounce rate, traffic source, etc.
Advertisement
Advertisement cookies are used to provide visitors with relevant ads and marketing campaigns. These cookies track visitors across websites and collect information to provide customized ads.
Others
Other uncategorized cookies are those that are being analyzed and have not been classified into a category as yet.
SAVE & ACCEPT
Skip to Recipe
809 shares