Today we are talking about two things, this amazing Broccoli Ramen Salad and the Food Network Star. They have absolutely nothing to do with each other, but since the finale is on Sunday I thought I would bring it up. 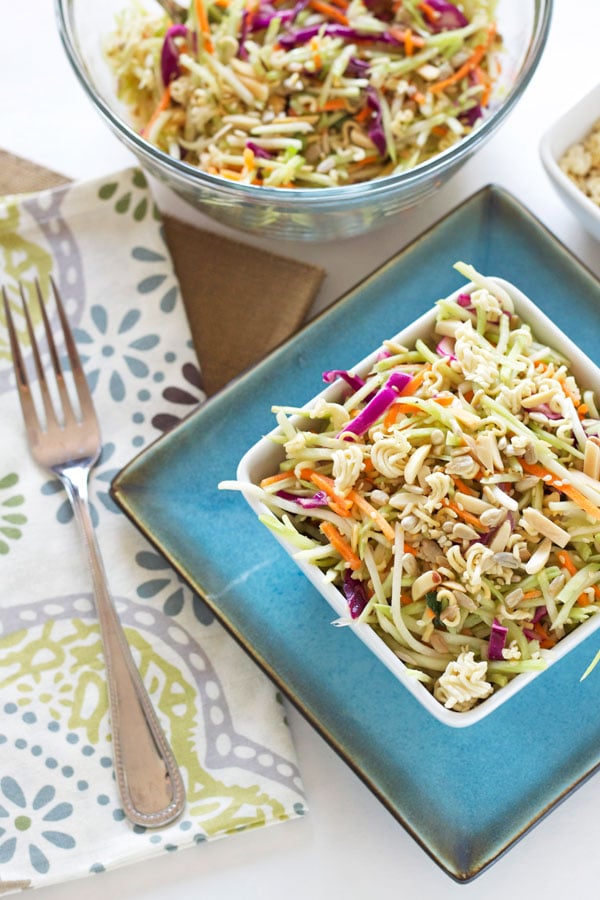 Let’s start with the show. Have you been watching it? I don’t usually get hooked on reality shows, but this time I did. My husband has no interest in watching the show with me, so to spare him I record it and watch it the next morning. It’s great for passing time if I’m running on the treadmill. If you’ve been watching you know that they are down to the final 3 contestants, Lenny, Luca, and Nicole. Last week Sarah got the boot and can I just say, it’s about time! Something about her just rubbed me the wrong way, no offense Texas. My favorite person and the one I’m hoping will win is Lenny. He seriously cracks me up with his cowboy hat, boots, and huge belt buckle. I love his outgoing personality, sense of humor, not to mention his food has been looking pretty tasty. I think he would add some lighthearted humor to the Food Network. If Lenny doesn’t make it, my second favorite is Luca. He’s sort of like the male version of Giada. Who are you hoping will win? 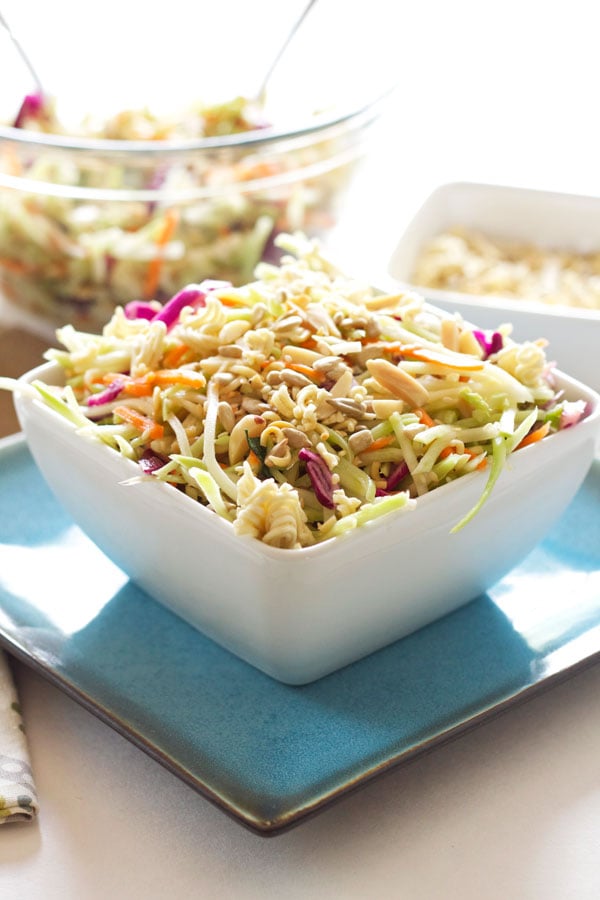 Ok, now that we have that out of the way lets talk about this awesome, addictive, and easy to make Broccoli Ramen Salad! My family has been making this salad since I was a teenager and it’s by far one of my favorites. It’s perfect for BBQ’s and picnics because there is no mayonnaise or ingredients that might spoil. I love having it as a side dish with some grilled chicken or burgers.

Because the original recipe calls for quite a bit of butter (3/4 of a stick to be exact) in the ramen topping as well as a lot of sugar and oil in the dressing, I knew I wanted to revise the recipe and make it a little lighter. First thing I did was cut most of the butter out of the ramen topping. I only used about 1/2 a tablespoon which was just enough to give the ramen, sunflower seeds, slivered almonds, and sesame seeds that buttery crunch. Using less butter also made me feel better about the amount of topping that ended up in my mouth before making it to the salad, trust me, it will happen to you too! 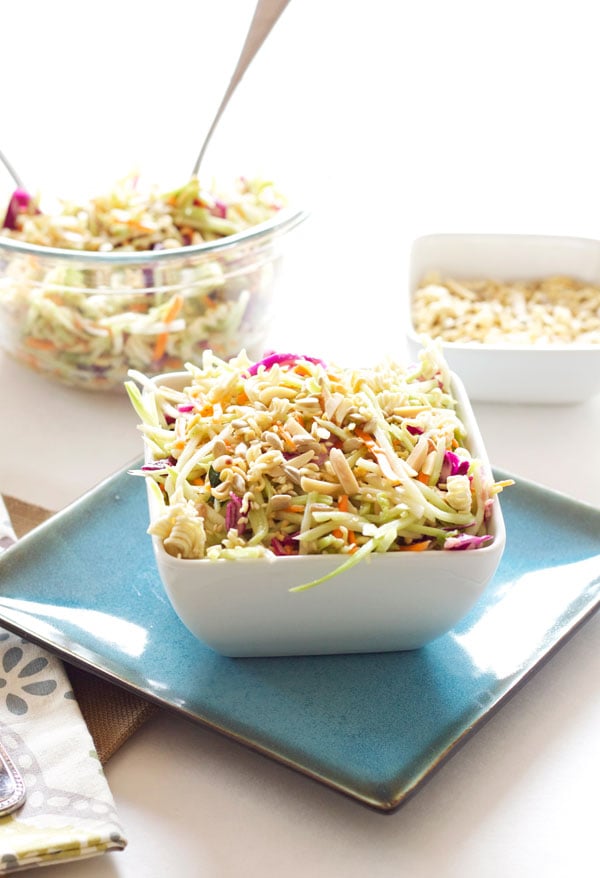 Now let’s talk dressing. Dressings are a major calorie bomb when it comes to salad and the original recipe for this one was no exception. The original recipe called for a 1/2 cup of oil and a 1/2 cup of sugar, well that’s a frightening amount of calories! Since it is still summer and there are still bathing suits to be worn, I reworked the dressing and came up with one that only uses 2 tablespoons of oil and 3 tablespoons of agave nectar or honey rather than the gut busting 1/2 cup of sugar. This Broccoli Ramen Salad has some serious texture going on in it, which I absolutely love. The broccoli slaw itself has crunch and then you add in the crunchy mixture of the ramen, almonds, and sunflower seeds, it’s a real party for your mouth! The flavors of the salad are Asian in flavor thanks to some added soy sauce and rice wine vinegar in the dressing. I love the combination of the saltiness from the ramen topping paired with the slightly sweet dressing, and the freshness of the broccoli slaw. This salad is a total crowd pleaser, I guarantee you won’t go home with leftovers! 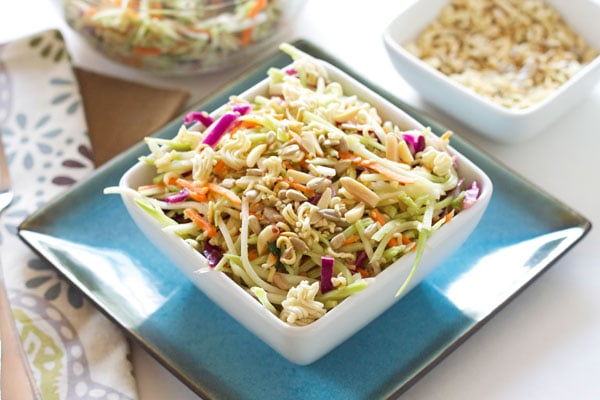 For the Broccoli Ramen Salad

Wait until just before serving to add the ramen mixture to the salad. If added too soon the ramen will get soft and the topping won't be crunchy.

This website uses cookies to improve your experience while you navigate through the website. Out of these, the cookies that are categorized as necessary are stored on your browser as they are essential for the working of basic functionalities of the website. We also use third-party cookies that help us analyze and understand how you use this website. These cookies will be stored in your browser only with your consent. You also have the option to opt-out of these cookies. But opting out of some of these cookies may affect your browsing experience.
Necessary Always Enabled
Necessary cookies are absolutely essential for the website to function properly. These cookies ensure basic functionalities and security features of the website, anonymously.
Functional
Functional cookies help to perform certain functionalities like sharing the content of the website on social media platforms, collect feedbacks, and other third-party features.
Performance
Performance cookies are used to understand and analyze the key performance indexes of the website which helps in delivering a better user experience for the visitors.
Analytics
Analytical cookies are used to understand how visitors interact with the website. These cookies help provide information on metrics the number of visitors, bounce rate, traffic source, etc.
Advertisement
Advertisement cookies are used to provide visitors with relevant ads and marketing campaigns. These cookies track visitors across websites and collect information to provide customized ads.
Others
Other uncategorized cookies are those that are being analyzed and have not been classified into a category as yet.
SAVE & ACCEPT
Skip to Recipe
1961 shares