Cool off this summer with one of these Chocolate Dipped Toasted Coconut Yogurt Pops! Full of wholesome ingredients they make a great healthier dessert! 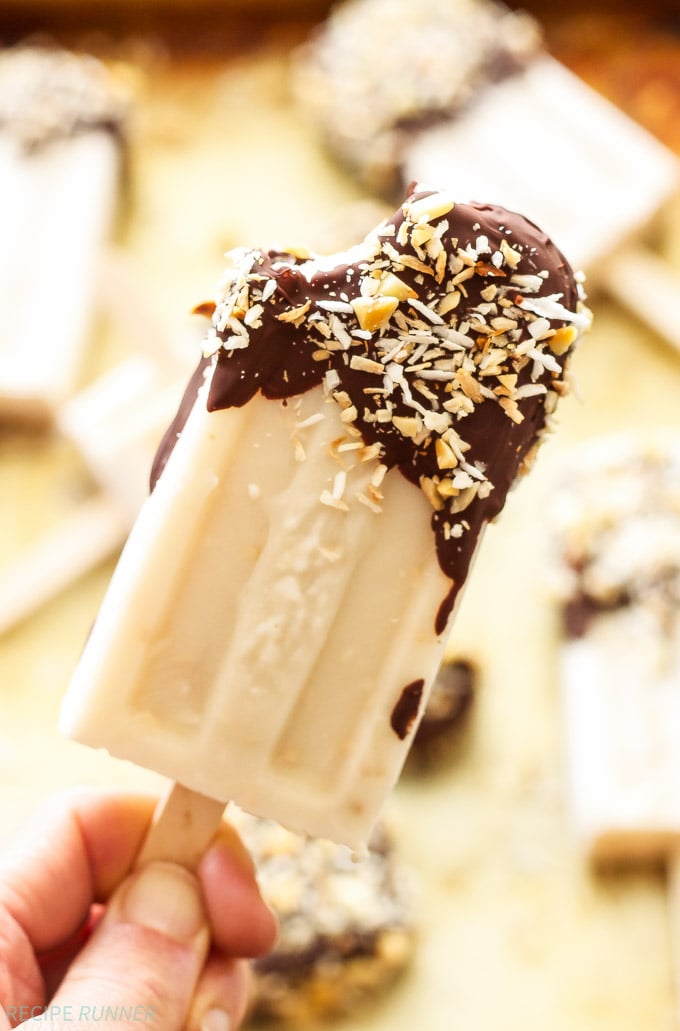 With half the country still in a ridiculous heat wave I thought it would be appropriate to share a frozen treat to cool off with. These Chocolate Dipped Toasted Coconut Yogurt Pops are basically how I’ve been surviving the heat this past week. Nothing sounds better to me on a hot day than a creamy, frozen, sweet treat! 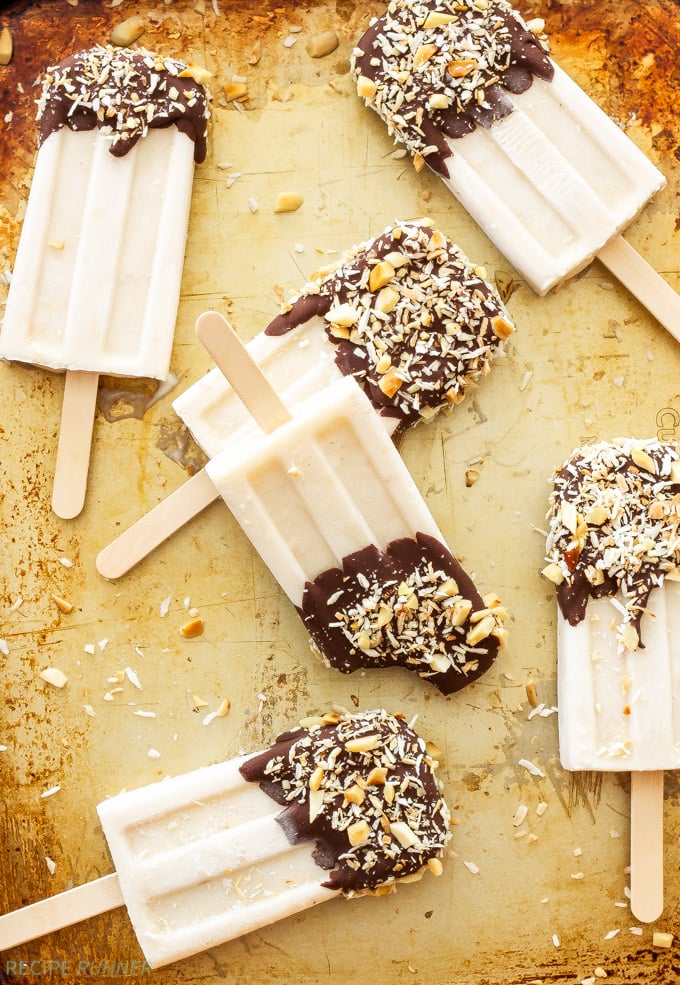 The best part about these toasted coconut yogurt pops, is that you don’t have to feel guilty eating them, unlike that pint of ice cream I ate last weekend. These yogurt pops are full of good for you ingredients and a good amount of protein. I love making my own popsicles because I know exactly what’s going into them. I can control the ingredients, the fat, the sweetness and customize them to whatever flavor I’m craving at that moment. 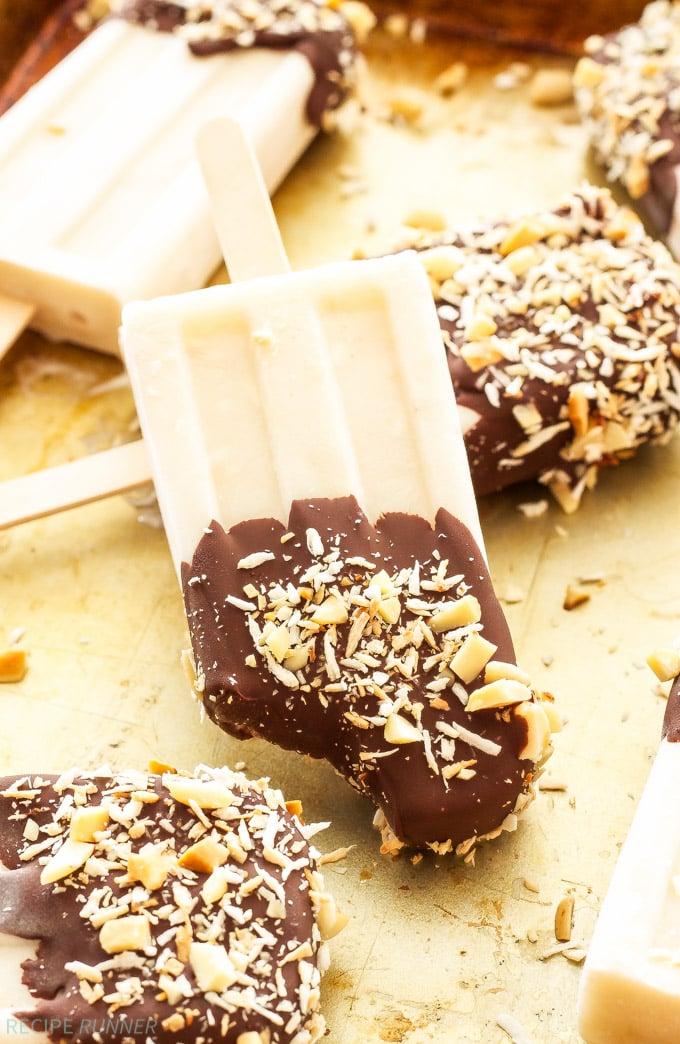 I’ve been craving a lot of chocolate and coconut sweets lately, so combining the two into a frozen yogurt pop was a no brainer. The yogurt pop is made using canned light coconut milk, plain Greek yogurt, maple syrup for sweetness, toasted coconut flakes, coconut extract and Vital Proteins collagen peptides. I bet you weren’t expecting to hear that last ingredient! If you remember a couple weeks ago I made some delicious Vanilla Yogurt Panna Cotta with Warm Berry Sauce using Vital Proteins beef gelatin. Unlike the beef gelatin, the collagen peptides can be added to nearly anything you eat or drink. 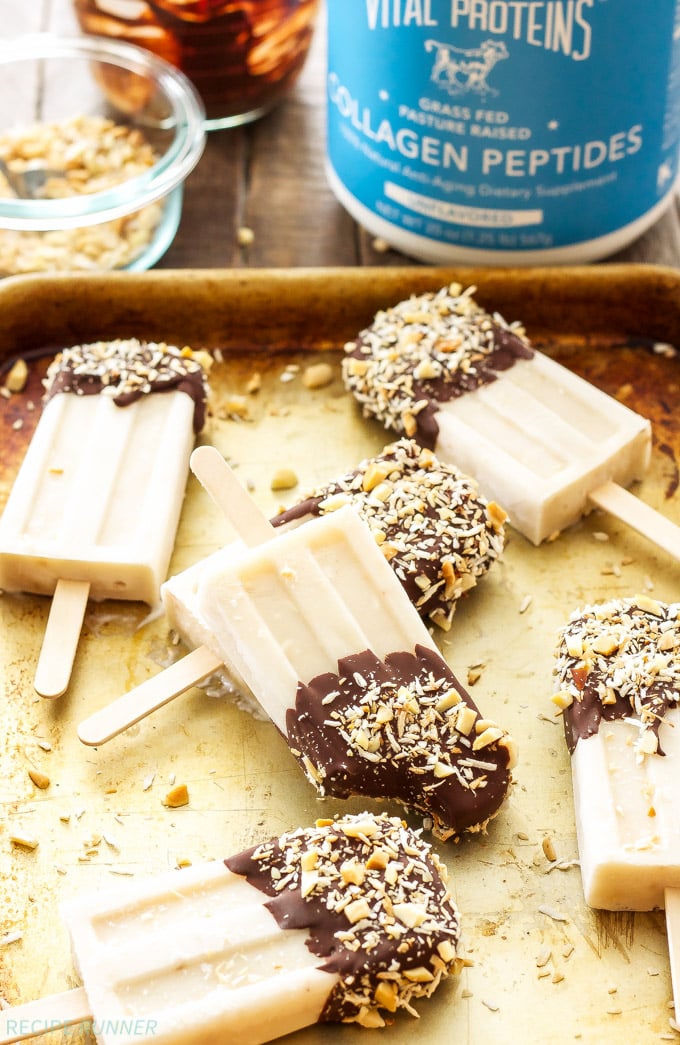 Collagen peptides are derived from gelatin and contain the same amino-acids. The biggest difference between them and the gelatin is that they will dissolve in cold or warm liquid. They are a great supplement for your hair, skin, nails, bones and joints. The Vital Proteins collagen peptides that I used were unflavored, so they can be added to just about anything and you won’t taste them. Adding the peptides to these Chocolate Dipped Toasted Coconut Yogurt Pops was not only a great way to reap the benefits I mentioned above, but they also added an extra 18 grams of protein on top of the 23 grams that the Greek yogurt provided. With so many benefits and the fact that they taste fantastic I really can’t think of a reason why you shouldn’t make these yogurt pops this weekend! 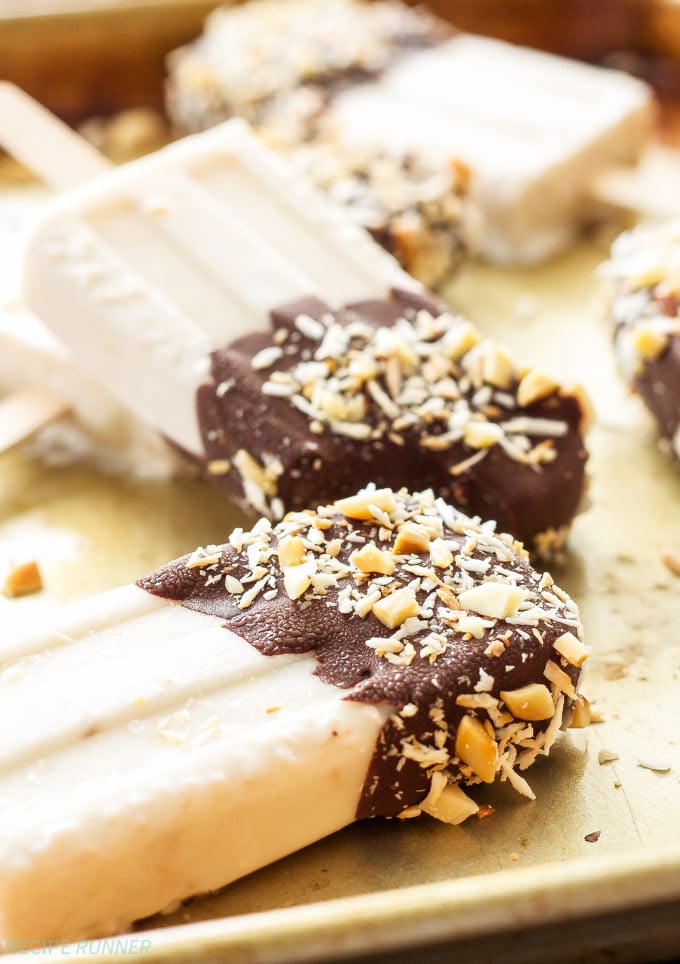 Along with the great recipe for these Chocolate Dipped Toasted Coconut Yogurt Pops, Vital Proteins has generously offered up a chance for you and a friend to each win a 20 oz. container of the Vital Proteins collagen peptides! You guys are going to love these peptides, plus then you’ll have no choice but to make the yogurt pops! Enter below for your chance to win, good luck!

Thanks to Vital Proteins for sponsoring this post and giveaway. As always all opinions are my own.

This website uses cookies to improve your experience while you navigate through the website. Out of these, the cookies that are categorized as necessary are stored on your browser as they are essential for the working of basic functionalities of the website. We also use third-party cookies that help us analyze and understand how you use this website. These cookies will be stored in your browser only with your consent. You also have the option to opt-out of these cookies. But opting out of some of these cookies may affect your browsing experience.
Necessary Always Enabled

Performance cookies are used to understand and analyze the key performance indexes of the website which helps in delivering a better user experience for the visitors.

Analytical cookies are used to understand how visitors interact with the website. These cookies help provide information on metrics the number of visitors, bounce rate, traffic source, etc.

Advertisement cookies are used to provide visitors with relevant ads and marketing campaigns. These cookies track visitors across websites and collect information to provide customized ads.

Other uncategorized cookies are those that are being analyzed and have not been classified into a category as yet.

SAVE & ACCEPT
Skip to Recipe