Today I’m going Southern on you guys and sharing one of my favorite sandwiches, Pulled Pork Biscuit Sandwiches. 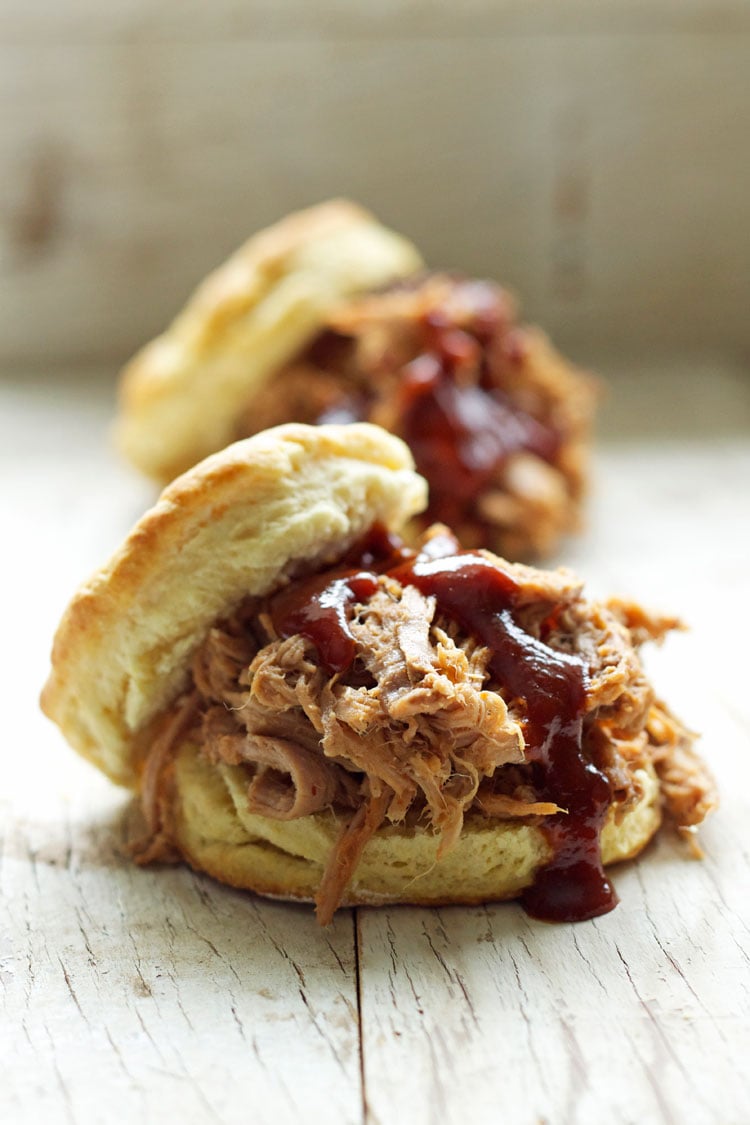 My love for pulled pork first started back in Arizona when I was young and I took my first trip to a great local BBQ restaurant called Joe’s Real BBQ. I remember ordering the pulled pork sandwich with a side of macaroni, AMAZING! This pork was so tender, moist, and all on a toasted bun. At Joe’s they don’t put a whole lot of BBQ sauce on the meat, rather they have their sauce out on the condiment bar along with pickles, jalapeños, and pickled onions so you can put on however much your heart desires, which in my case is usually rather heavy on the sauce. So that was the start of my pulled pork love, but it was further deepened when I visited my sister in Texas…Oh my goodness do Texans know their BBQ! I remember stepping off the plane in Austin and the first thing I smelled was BBQ, it was fantastic! My favorite pulled pork though has to be my Mom’s recipe. Since she isn’t here in Colorado to make it for me I decided to recreate it myself. 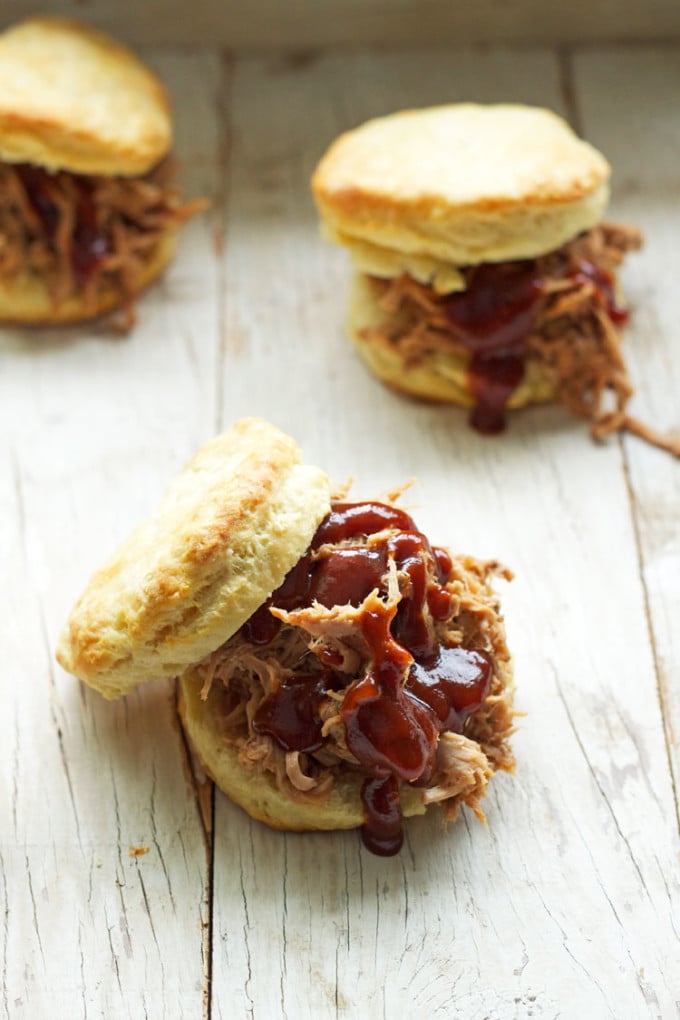 She makes her pulled pork in the crockpot and not only does it turn out delicious, but it’s also a super easy, hands off meal to make. Pork shoulder is the typical cut of meat used for pulled pork and while I love it, let’s just say it isn’t the leanest cut of meat (probably why it’s so delicious). To make mine a little more healthy I used pork tenderloin. I kept the dry rub mixture she uses mostly the same. The rub uses spices such as smoked paprika, garlic, onion, thyme, black pepper, and a little cayenne. The spice combination gives it a smokey flavor with a slight kick thanks to the cayenne and black pepper. Once the pork was cooked I shredded it and mixed in about 1/3 cup of BBQ sauce. 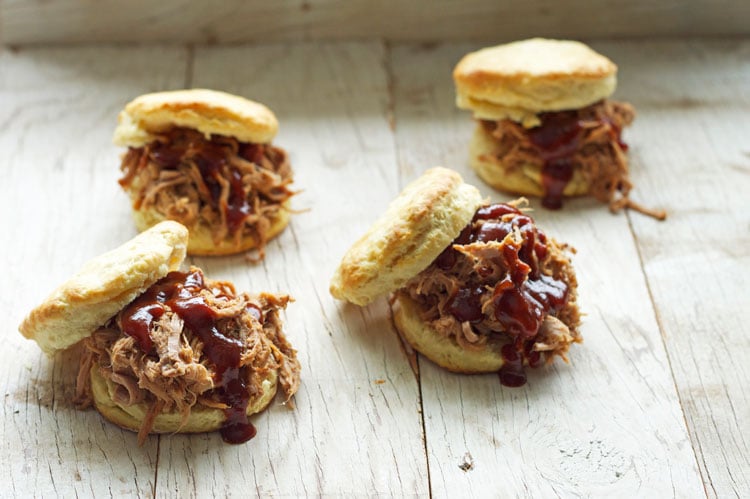 So, as if the pork isn’t good enough on it’s own, I decided lets take this to a whole new level and put it on a flakey warm biscuit. The biscuit recipe was adapted from Christina over at Desserts For Two. You have to check out her recipes and watch her video, cutest girl ever! I like to reference her recipes because she has spent hours tweaking and testing them so that they are just enough for two people, which is perfect for my husband and I. Because I was trying to make these Pulled Pork Biscuit Sandwiches a little lighter I knew I had to make a change to the biscuits as well. I replaced the shortening with Greek yogurt. The biscuits were slightly more dense, but they still had a buttery flakey texture, which is exactly what I was going for. These Pulled Pork Biscuit Sandwiches make a great weeknight meal or are perfect for serving a crowd (just be sure to double the biscuit recipe). If you are a pulled pork lover like me but don’t want all the guilt that comes with eating it, give this lighter version a try! 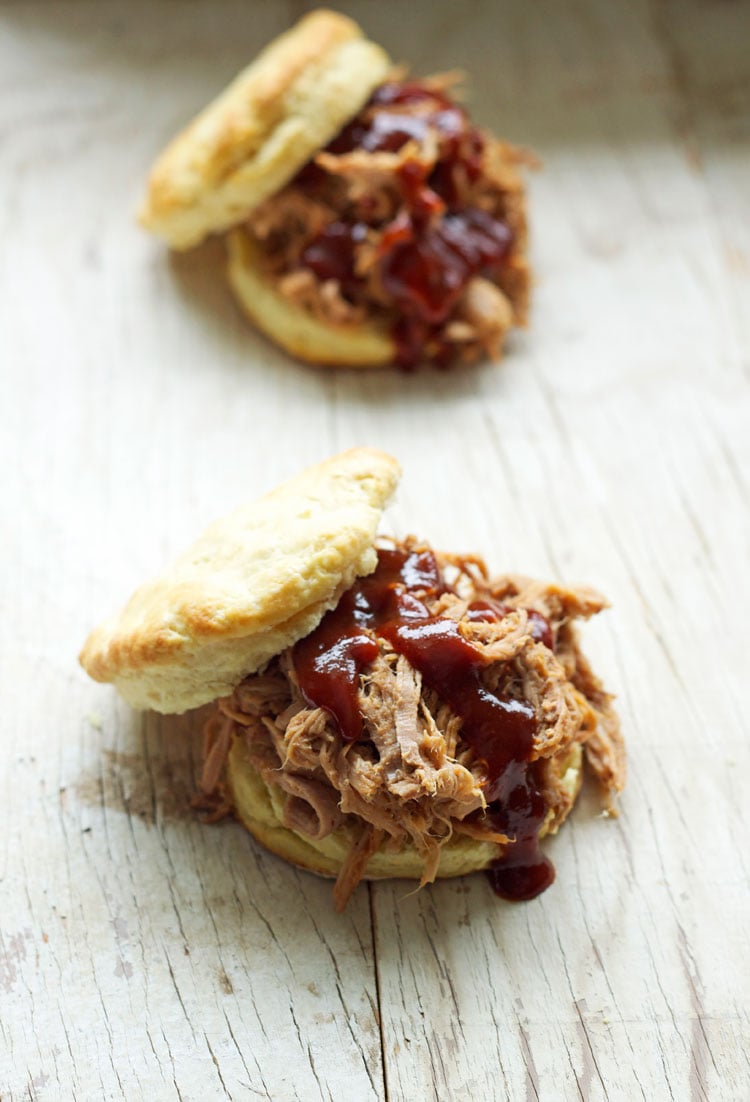 For the Pulled Pork

To Make the Pulled Pork

To Make the Biscuits

The pulled pork keeps for several days in the fridge or you can freeze the extra meat for another meal.

This website uses cookies to improve your experience while you navigate through the website. Out of these, the cookies that are categorized as necessary are stored on your browser as they are essential for the working of basic functionalities of the website. We also use third-party cookies that help us analyze and understand how you use this website. These cookies will be stored in your browser only with your consent. You also have the option to opt-out of these cookies. But opting out of some of these cookies may affect your browsing experience.
Necessary Always Enabled
Necessary cookies are absolutely essential for the website to function properly. These cookies ensure basic functionalities and security features of the website, anonymously.
Functional
Functional cookies help to perform certain functionalities like sharing the content of the website on social media platforms, collect feedbacks, and other third-party features.
Performance
Performance cookies are used to understand and analyze the key performance indexes of the website which helps in delivering a better user experience for the visitors.
Analytics
Analytical cookies are used to understand how visitors interact with the website. These cookies help provide information on metrics the number of visitors, bounce rate, traffic source, etc.
Advertisement
Advertisement cookies are used to provide visitors with relevant ads and marketing campaigns. These cookies track visitors across websites and collect information to provide customized ads.
Others
Other uncategorized cookies are those that are being analyzed and have not been classified into a category as yet.
SAVE & ACCEPT
Skip to Recipe
4125 shares