Shredded sweet potatoes are a great alternative to the calorie heavy pie crust in this Spinach, Bacon, Cheese Quiche with Sweet Potato Crust. They add a touch of sweetness to this savory and hearty quiche!

On Monday I shared a sweet recipe, Gingerbread Dutch Baby with Cider Apples, for your Christmas morning breakfast and today I’m sharing a savory one. Spinach, Bacon, Cheese Quiche with Sweet Potato Crust is a must Christmas morning! 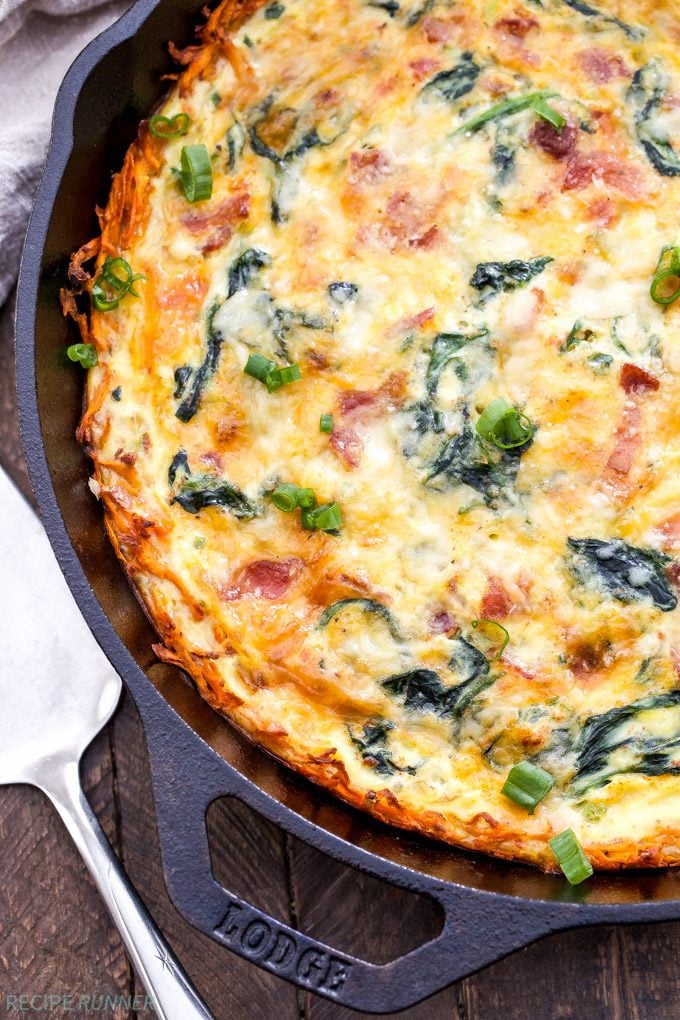 I made it through October, November and half of December only having to do a few of my runs on the treadmill. Luckily, none of them were my long Saturday run. However, it’s looking like my luck may run out. As of right now there is a chance of snow Saturday morning and the temperature when I go out to run will be a nice balmy 1 degree.

I dread having to do long runs on the treadmill every year. The boredom is almost more than I can handle. The first half of the run is usually the worst, by the second half I’ve kind of accepted it and stopped counting how many miles I have left. Luckily, there’s a TV in the basement so I can at least catch up on all the shows I’ve missed or put in a movie. 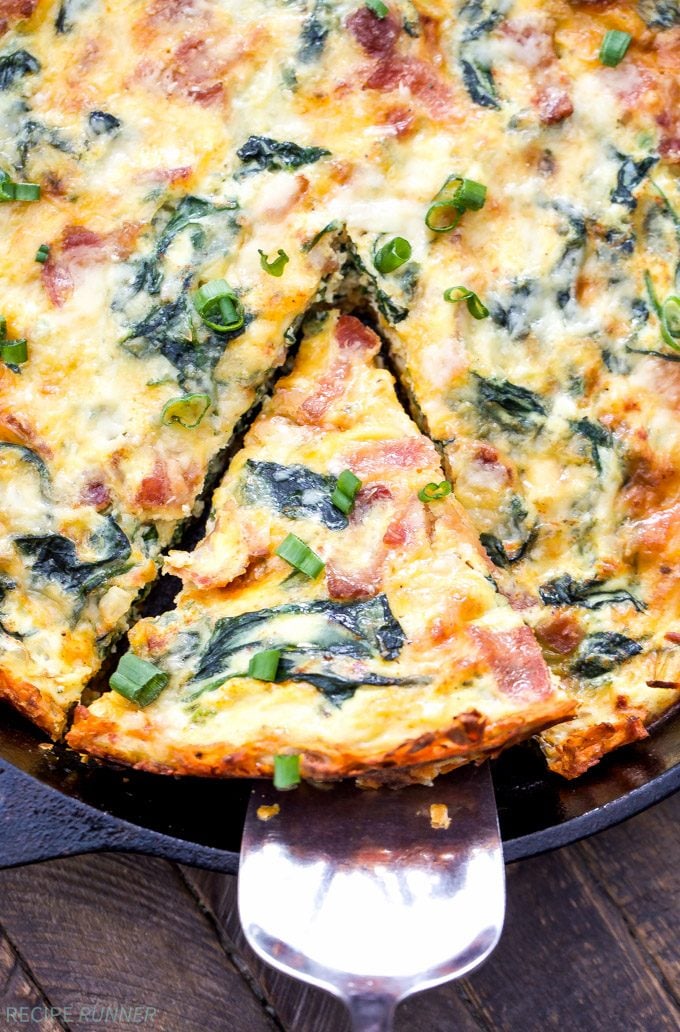 With any luck I’ll be able to run outside on Christmas morning. Every year since we moved to Colorado I haven’t been able to because we’ve had a big snow. I especially love running outside on holidays because there’s no cars out and it’s so quiet. Just me and the occasional wildlife sighting.

After the Christmas morning run, I’ll be making this quiche as part of our breakfast. My husband tends to sleep in whenever he has the opportunity, so I’ll have plenty of time to get everything prepared.

Can I Make the Quiche Ahead of Time? 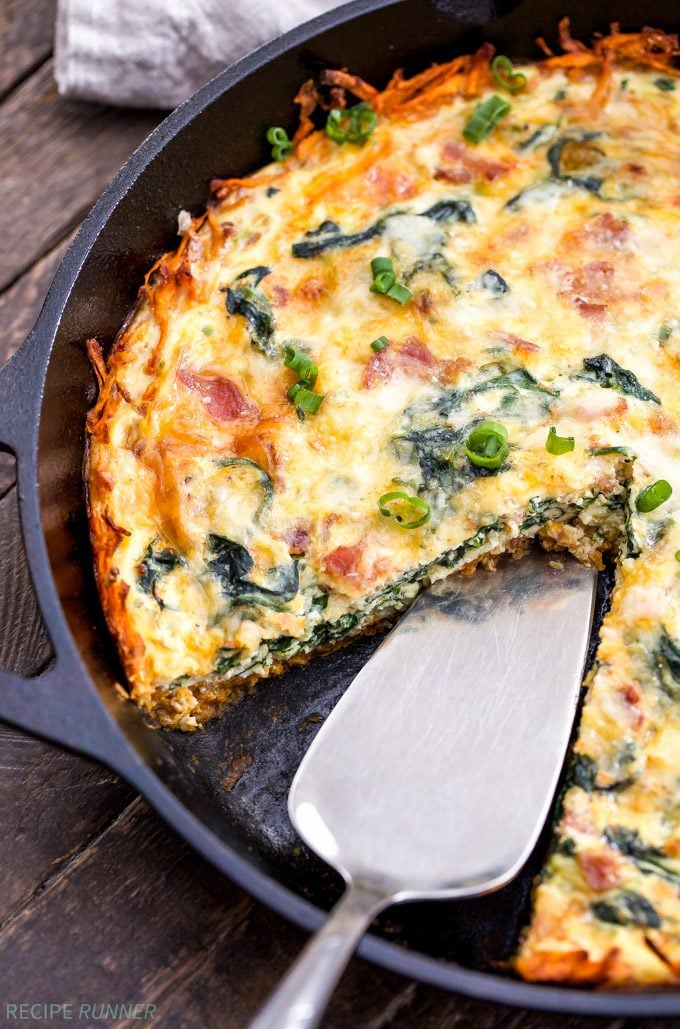 I loved using the shredded sweet potatoes as an alternative to pie dough for a couple reasons. First it’s lighter on fat and calories and it’s a vegetable, bonus! I also love the texture and bit of sweetness that it adds to the savory quiche. Pie crust often lacks flavor, but this sweet potato crust is full of it!

You’ll be adding a healthier, but extremely delicious alternative quiche to your breakfast table this year when you make this Spinach, Bacon, Cheese Quiche with Sweet Potato Crust! 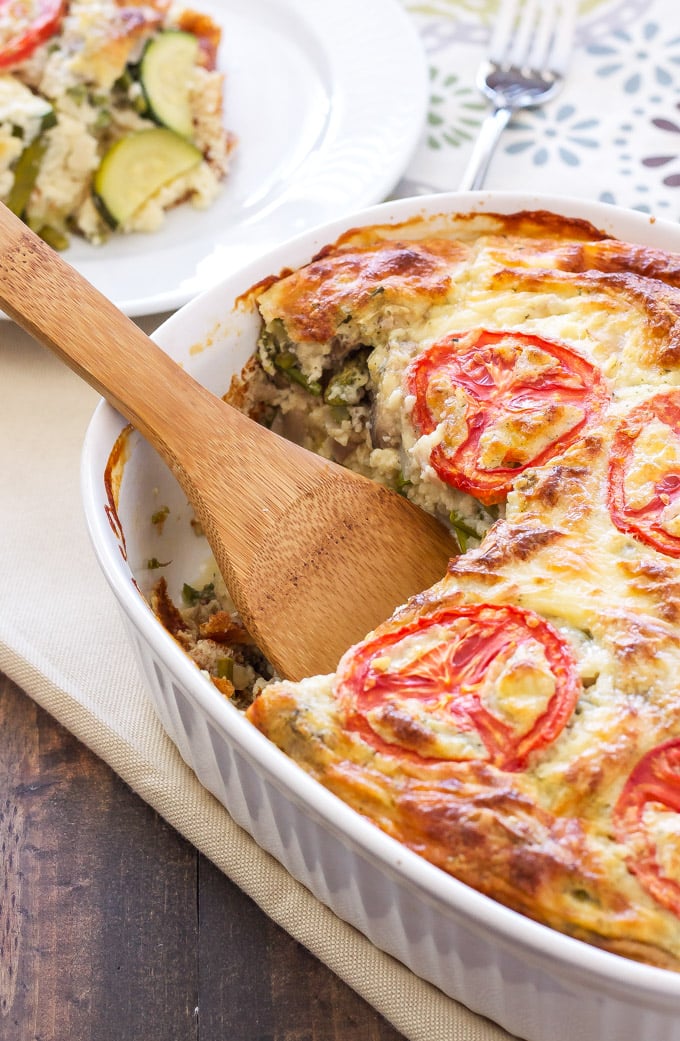 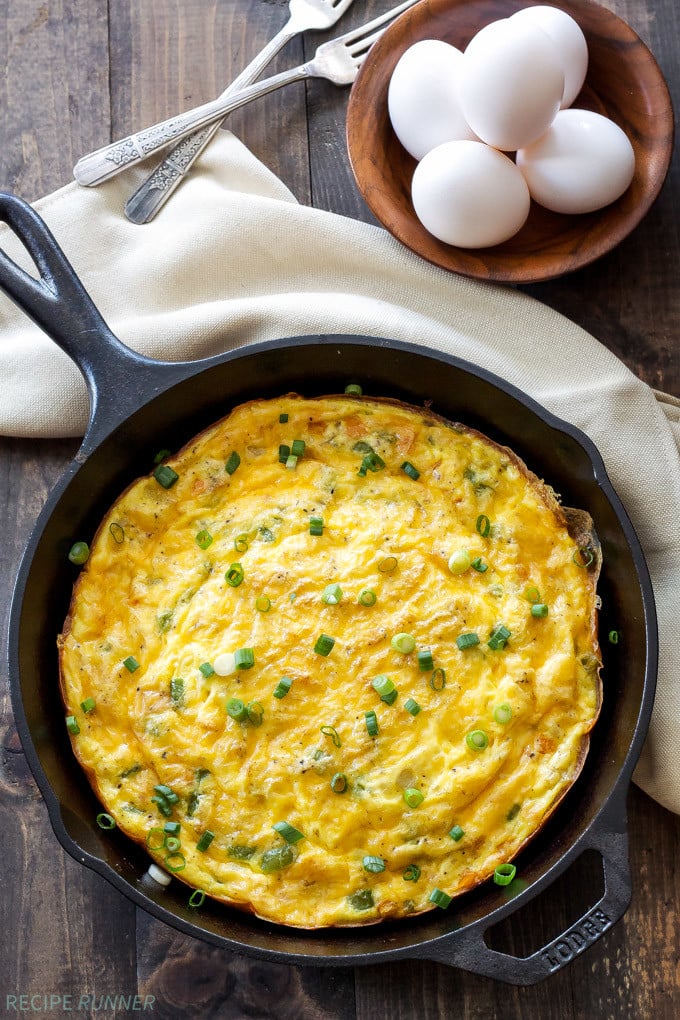 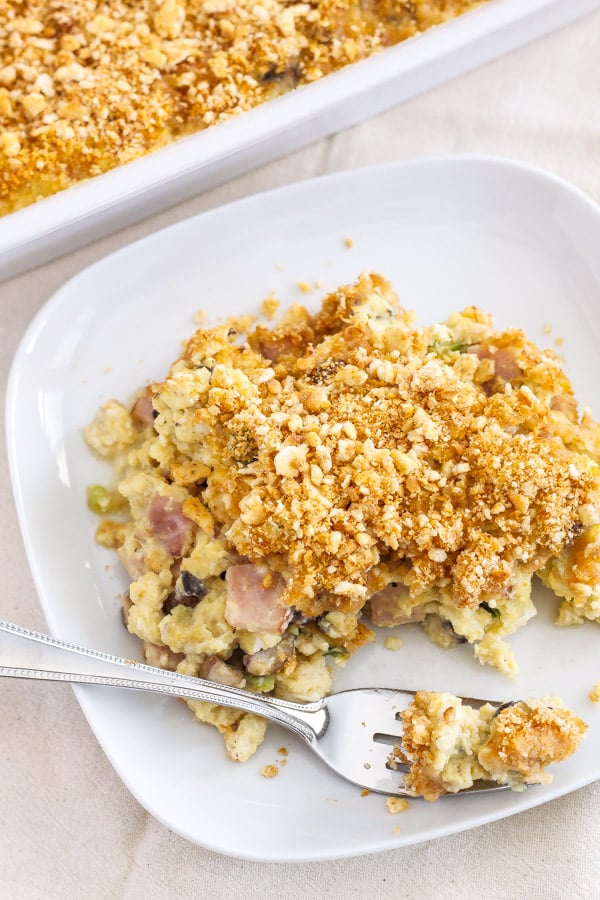 This website uses cookies to improve your experience while you navigate through the website. Out of these, the cookies that are categorized as necessary are stored on your browser as they are essential for the working of basic functionalities of the website. We also use third-party cookies that help us analyze and understand how you use this website. These cookies will be stored in your browser only with your consent. You also have the option to opt-out of these cookies. But opting out of some of these cookies may affect your browsing experience.
Necessary Always Enabled
Necessary cookies are absolutely essential for the website to function properly. These cookies ensure basic functionalities and security features of the website, anonymously.
Functional
Functional cookies help to perform certain functionalities like sharing the content of the website on social media platforms, collect feedbacks, and other third-party features.
Performance
Performance cookies are used to understand and analyze the key performance indexes of the website which helps in delivering a better user experience for the visitors.
Analytics
Analytical cookies are used to understand how visitors interact with the website. These cookies help provide information on metrics the number of visitors, bounce rate, traffic source, etc.
Advertisement
Advertisement cookies are used to provide visitors with relevant ads and marketing campaigns. These cookies track visitors across websites and collect information to provide customized ads.
Others
Other uncategorized cookies are those that are being analyzed and have not been classified into a category as yet.
SAVE & ACCEPT
Skip to Recipe
86535 shares