This Banana Snack Cake with Cinnamon Cream Cheese Frosting is perfect for times when you want a piece of cake, but not all the calories. It’s easy to make, moist and full of banana bread flavor! 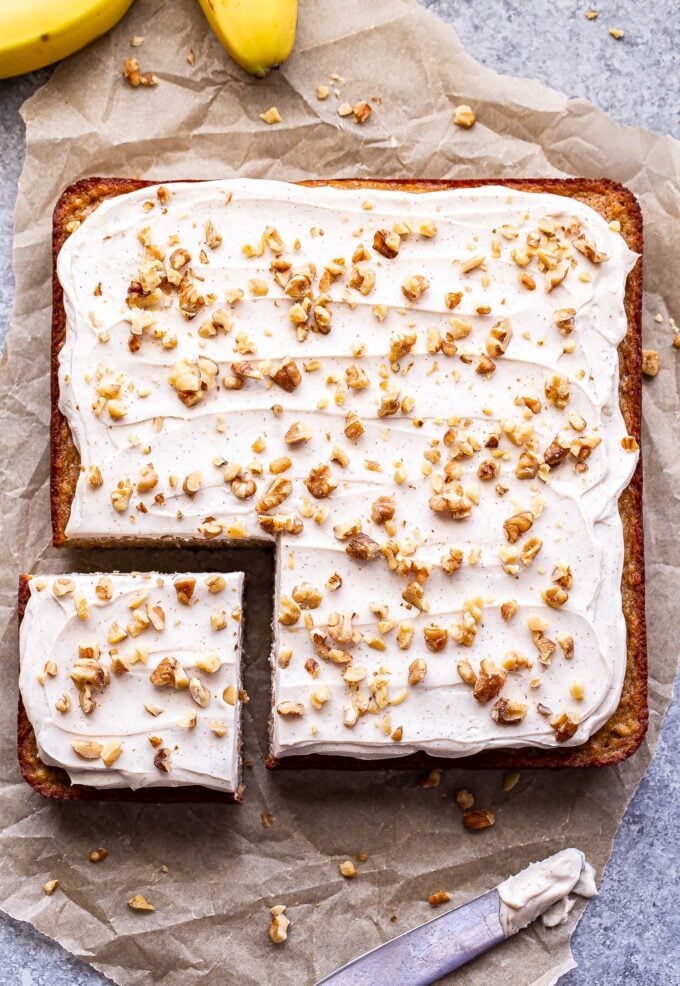 Move over banana bread, this Banana Snack Cake with Cinnamon Cream Cheese Frosting is where it’s at when you’ve got over-ripe bananas! As much as I love banana bread, this snack cake was a nice way to change things up. Unlike traditional cake, this one isn’t loaded with so much sugar that you hit your limit for the week in one sitting. It’s just sweet enough to satisfy your sweet tooth without giving you a stomach ache. 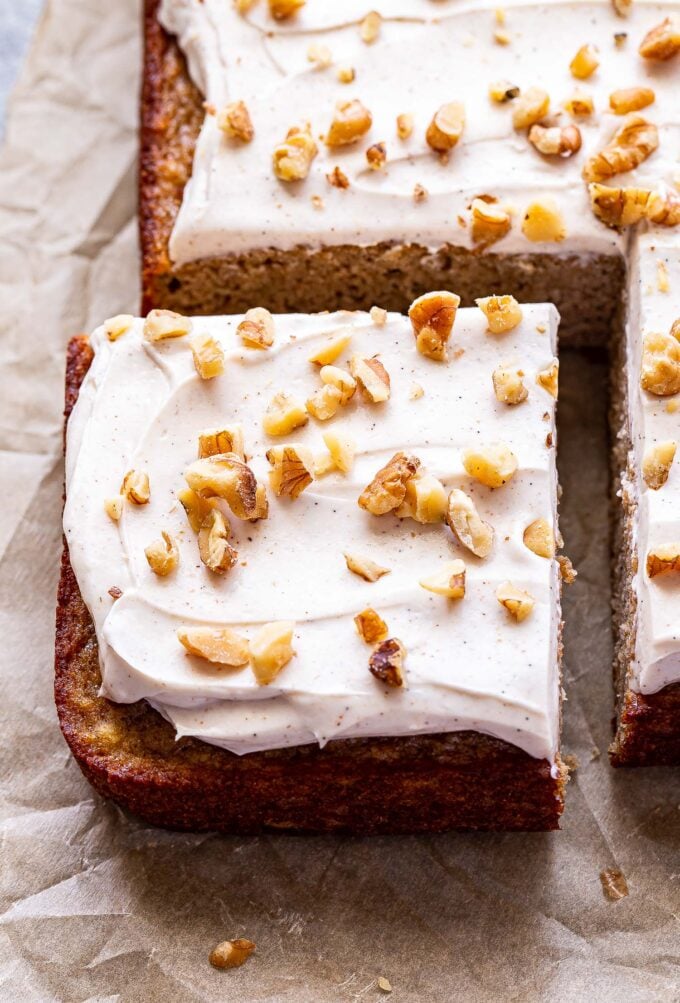 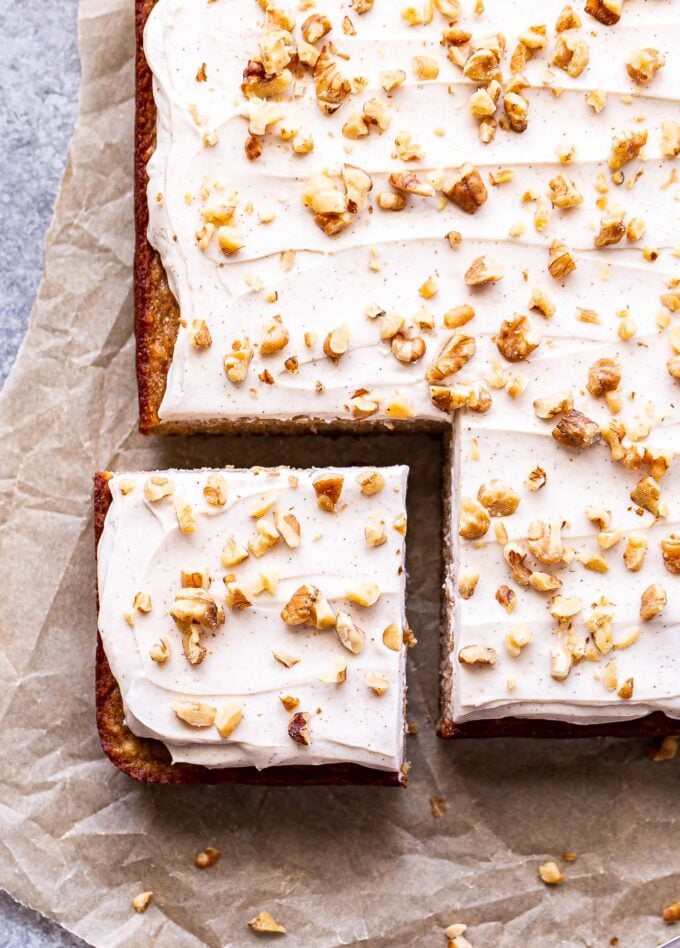 What is a Snack Cake?

A snack cake also termed a snacking cake sometimes, is a one layer cake with minimal or no icing. This Pumpkin Chocolate Chunk Cake is an example of a snack cake without any frosting. I highly recommend making it this fall. It’s typically baked in an 8×8 round or square baking pan. It’s essentially a small sheet cake.

Snacking cakes are casual and something you might bake on a Tuesday afternoon versus one you would bake for a special occasion. You also don’t need any special equipment such as an electric stand mixer to make them. A large mixing bowl, whisk and rubber spatula will do the trick. 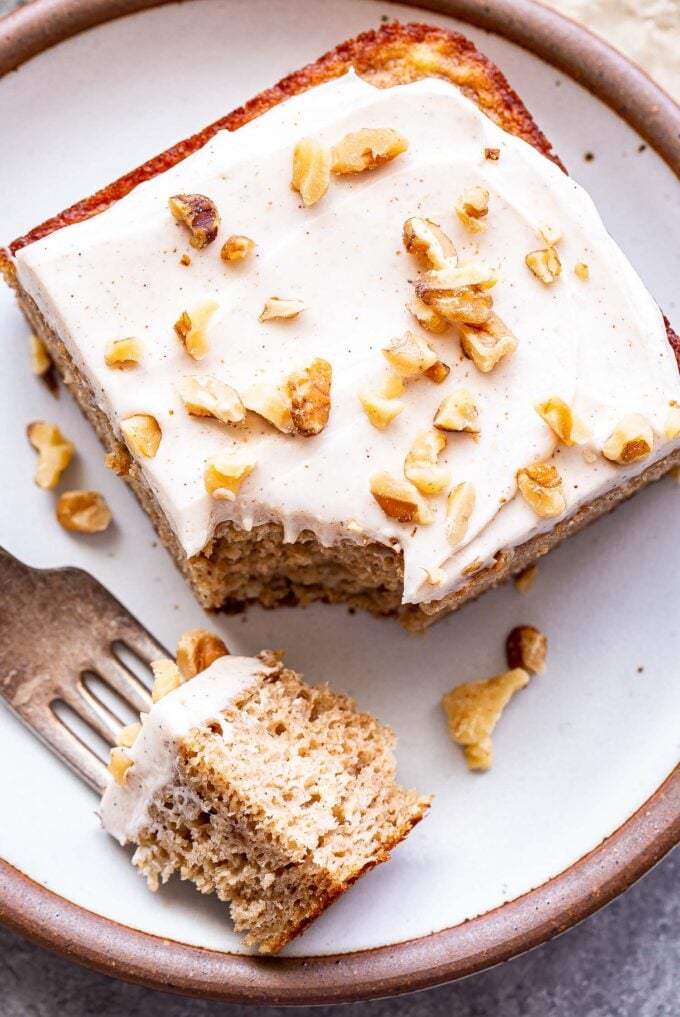 How To Make Banana Snack Cake 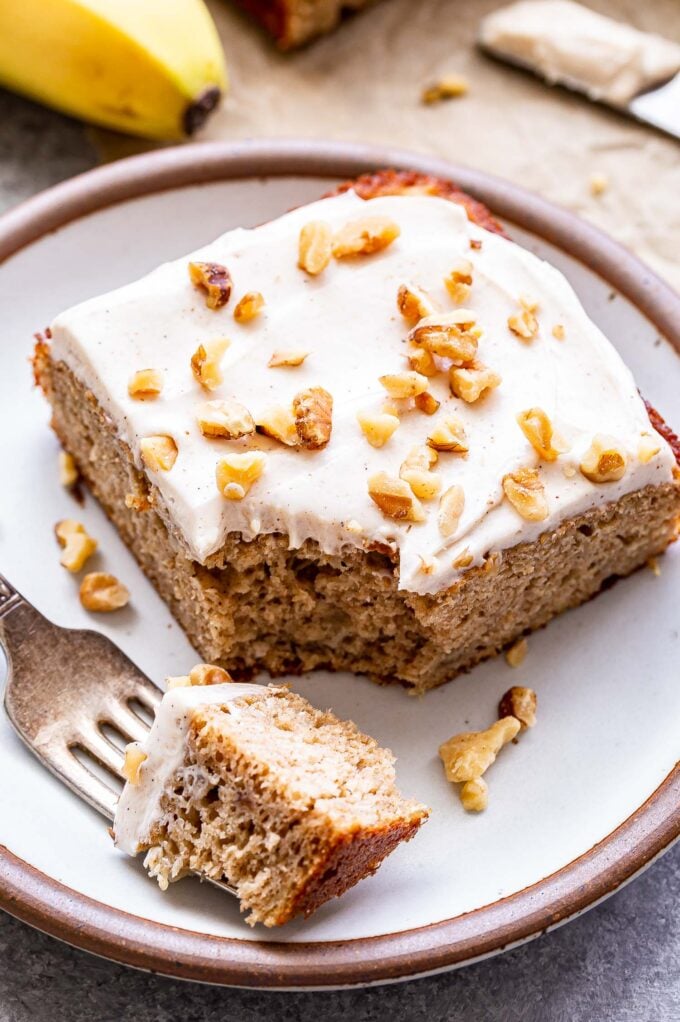 As you can see, it’s extremely easy to make. Honestly, not much different than making muffins with the exception of the cream cheese frosting. As far as cake goes, it’s also on the healthier side. Obviously it’s still dessert, but it isn’t the 600 calories or more per slice version. This banana snack cake is perfect to make when you’re in the mood for a piece of cake, but don’t want to put a lot of effort into making it! 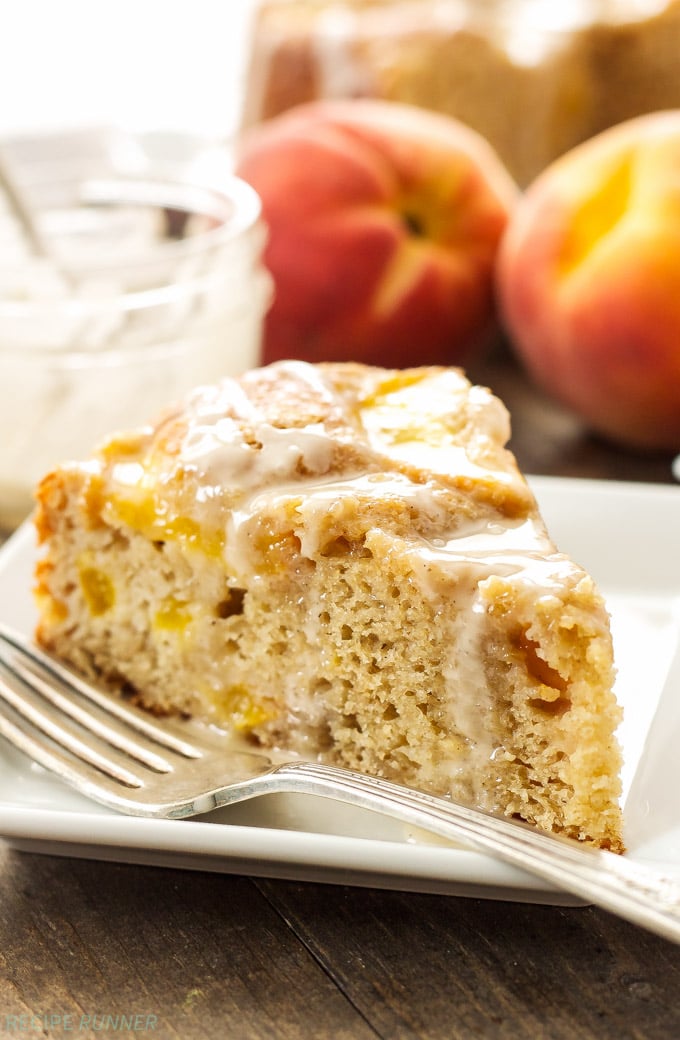 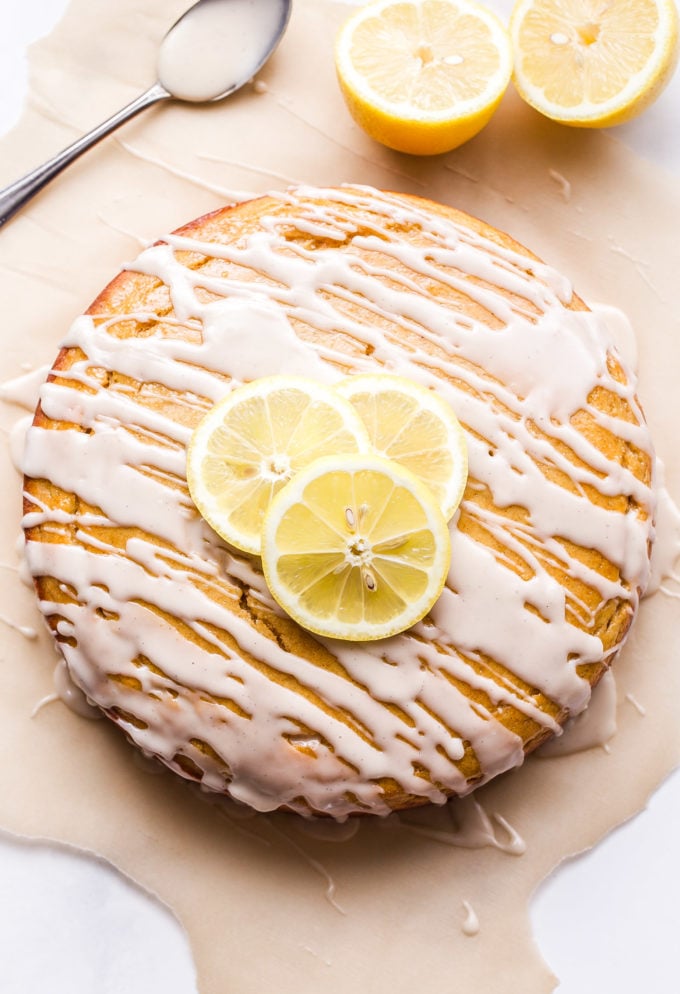 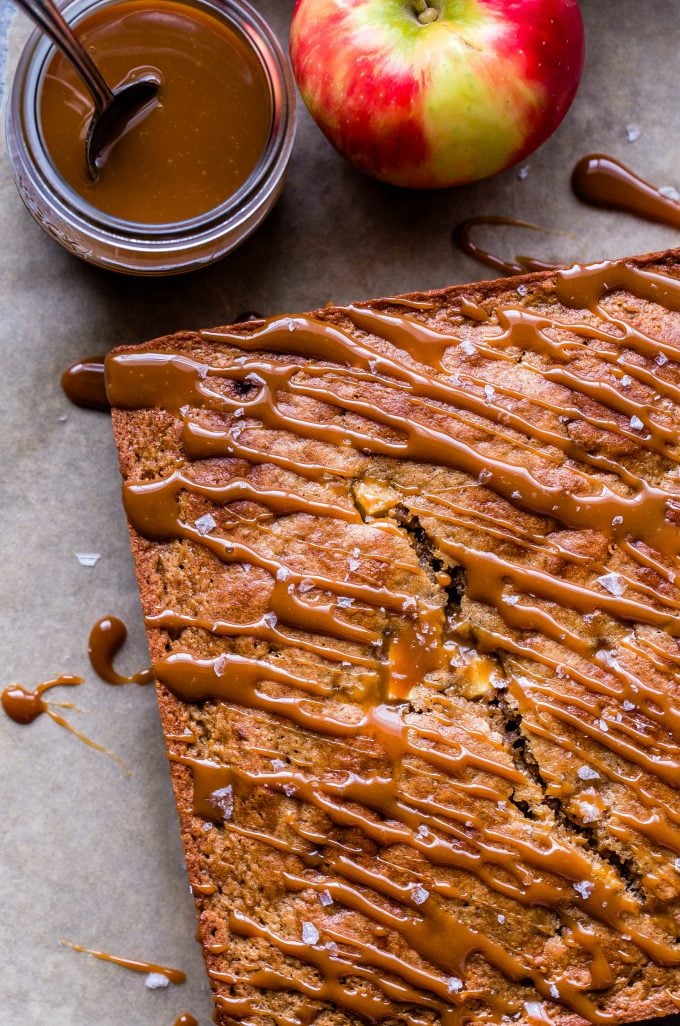 This website uses cookies to improve your experience while you navigate through the website. Out of these, the cookies that are categorized as necessary are stored on your browser as they are essential for the working of basic functionalities of the website. We also use third-party cookies that help us analyze and understand how you use this website. These cookies will be stored in your browser only with your consent. You also have the option to opt-out of these cookies. But opting out of some of these cookies may affect your browsing experience.
Necessary Always Enabled
Necessary cookies are absolutely essential for the website to function properly. These cookies ensure basic functionalities and security features of the website, anonymously.
Functional
Functional cookies help to perform certain functionalities like sharing the content of the website on social media platforms, collect feedbacks, and other third-party features.
Performance
Performance cookies are used to understand and analyze the key performance indexes of the website which helps in delivering a better user experience for the visitors.
Analytics
Analytical cookies are used to understand how visitors interact with the website. These cookies help provide information on metrics the number of visitors, bounce rate, traffic source, etc.
Advertisement
Advertisement cookies are used to provide visitors with relevant ads and marketing campaigns. These cookies track visitors across websites and collect information to provide customized ads.
Others
Other uncategorized cookies are those that are being analyzed and have not been classified into a category as yet.
SAVE & ACCEPT
Skip to Recipe
2101 shares