Carrot Cake Smoothie: If you love the flavors of carrot cake then this is the perfect guilt free smoothie for you! 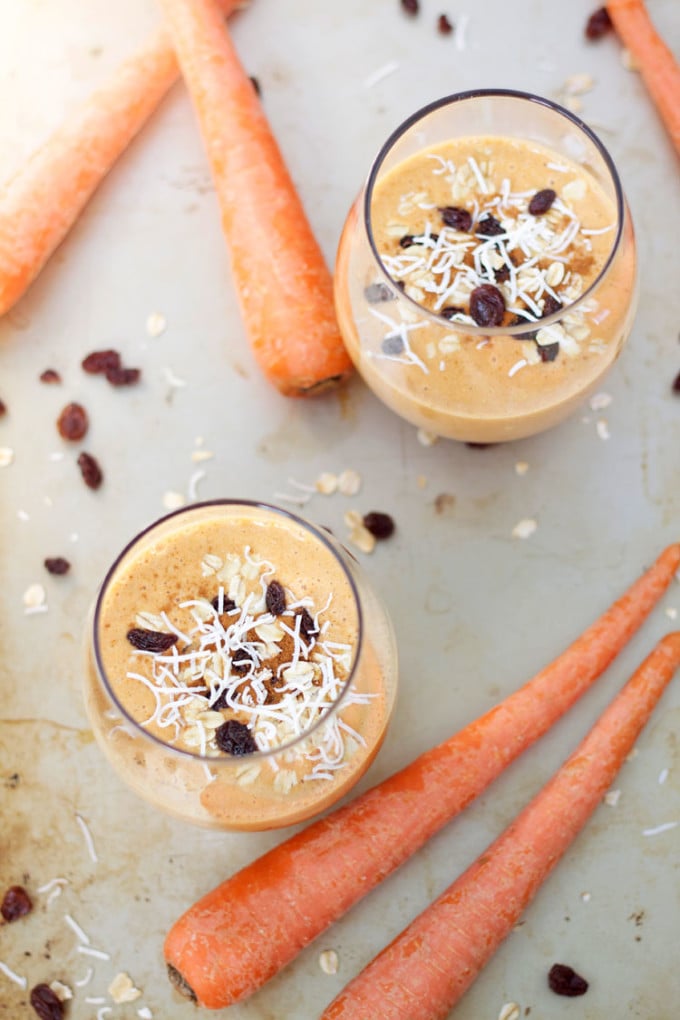 This morning was the Boston Marathon. If you didn’t already know it is the oldest continuously running marathon. It was first held in 1897 and had only 18 participants. Today it averages around 20,000 participants and nearly 500,000 spectators. This year was a particularly emotional year for the Boston Marathon after last year’s bombings.

Last year my sister ran the marathon and it was the longest and most tense time I have ever experienced waiting to get a call from her to say she was alright. I was anxious to watch the race this year and see some of the best American runners compete. The U.S. hasn’t placed first in the event in a LONG time. The last time the U.S. men received first place was in 1983 and the women in 1985. Today however, the men finally broke the dry spell of an American winning as Meb Keflezighi crossed the finish line with a time of 2:08:37.

The women unfortunately didn’t receive that first place spot, but they still put out amazing performances. I was rooting for Desiree Linden to get the win (in 2011 she came in 2nd), but today wasn’t her day and she ended up 11th. Shalane Flanagan also put out an amazing performance and took 6th. While it was disappointing that the women didn’t get that first place crown, they are still incredibly inspiring to me.

Being a runner and having run five marathons I get a sense of some of the things they are feeling out on the course. I know the pain, fatigue, and mental determination it takes just to complete a marathon, but to compete at that high of a level with that much pressure to come in first place is hard for me to grasp.

I put enough pressure on myself when I race knowing that in the large scale marathons first place isn’t even in my grasp. Yet I push myself to beat the time I had before and set a new personal record, dreaming that someday maybe I also will be good enough to compete with the best. So what does all this running talk have to do with food, nothing! Except for the fact that I’m always hungry thanks to running. 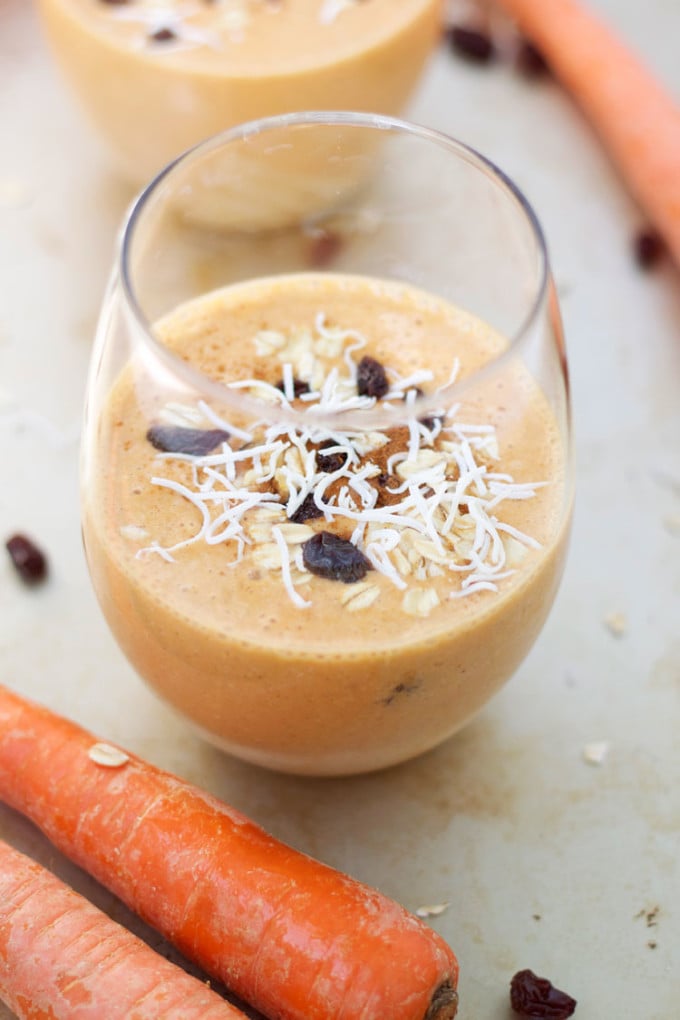 This morning after my run, which I ran extra fast thanks to all the adrenaline and motivation I was feeling from watching the race I made a delicious Carrot Cake Smoothie. 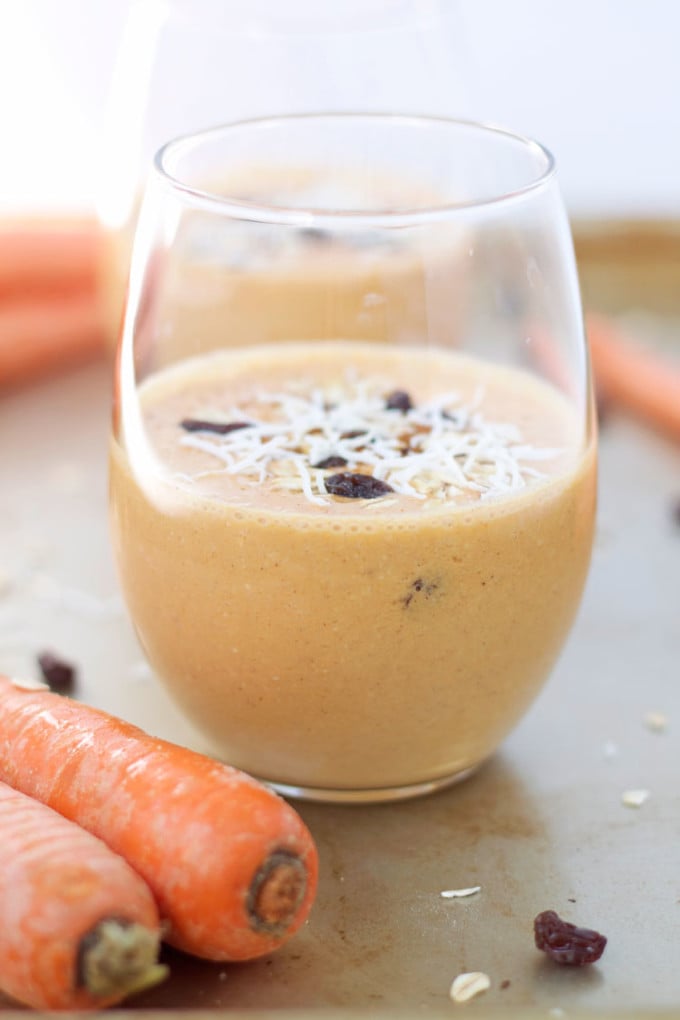 To make the smoothie chopped up a couple of carrots and put them in my Vitamix. I then added almond milk, a frozen banana, Greek yogurt, maple syrup, pecans, oats, coconut, cinnamon, ginger, nutmeg, and some ice. I let the Vitamix do it’s thing and pulverize the ingredients until I had a nice thick smoothie that tasted exactly like drinking carrot cake, but without any of the guilt!

I topped the smoothie with a few raisins and oats, a little extra coconut, and some cinnamon. Not only does this smoothie make a great breakfast, but I could also see myself having it for dessert, but with some whipped cream on top of course! Runner or not this Carrot Cake Smoothie is sure to please anyone who loves those flavors! 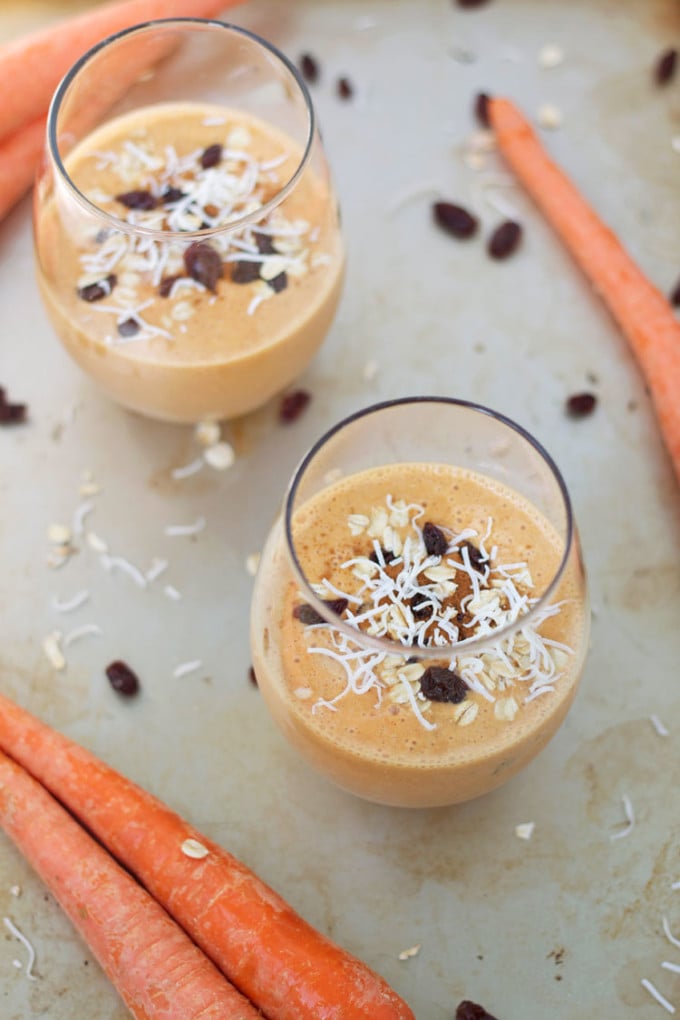 If you don't have a high speed blender I recommend shredding the carrots so that you don't end up with a chunky smoothie.

This website uses cookies to improve your experience while you navigate through the website. Out of these, the cookies that are categorized as necessary are stored on your browser as they are essential for the working of basic functionalities of the website. We also use third-party cookies that help us analyze and understand how you use this website. These cookies will be stored in your browser only with your consent. You also have the option to opt-out of these cookies. But opting out of some of these cookies may affect your browsing experience.
Necessary Always Enabled
Necessary cookies are absolutely essential for the website to function properly. These cookies ensure basic functionalities and security features of the website, anonymously.
Functional
Functional cookies help to perform certain functionalities like sharing the content of the website on social media platforms, collect feedbacks, and other third-party features.
Performance
Performance cookies are used to understand and analyze the key performance indexes of the website which helps in delivering a better user experience for the visitors.
Analytics
Analytical cookies are used to understand how visitors interact with the website. These cookies help provide information on metrics the number of visitors, bounce rate, traffic source, etc.
Advertisement
Advertisement cookies are used to provide visitors with relevant ads and marketing campaigns. These cookies track visitors across websites and collect information to provide customized ads.
Others
Other uncategorized cookies are those that are being analyzed and have not been classified into a category as yet.
SAVE & ACCEPT
Skip to Recipe
2165 shares