I think it’s about time I started sharing some apple recipes with you! I absolutely love anything with apples. They are good in savory dishes like these Slow Cooker Carnitas Tacos with Apple Salsa, desserts (I’ll be sharing one with you tomorrow), and of course breakfast! What better way to start your morning than with one of these Cinnamon Waffles with Apple Topping! 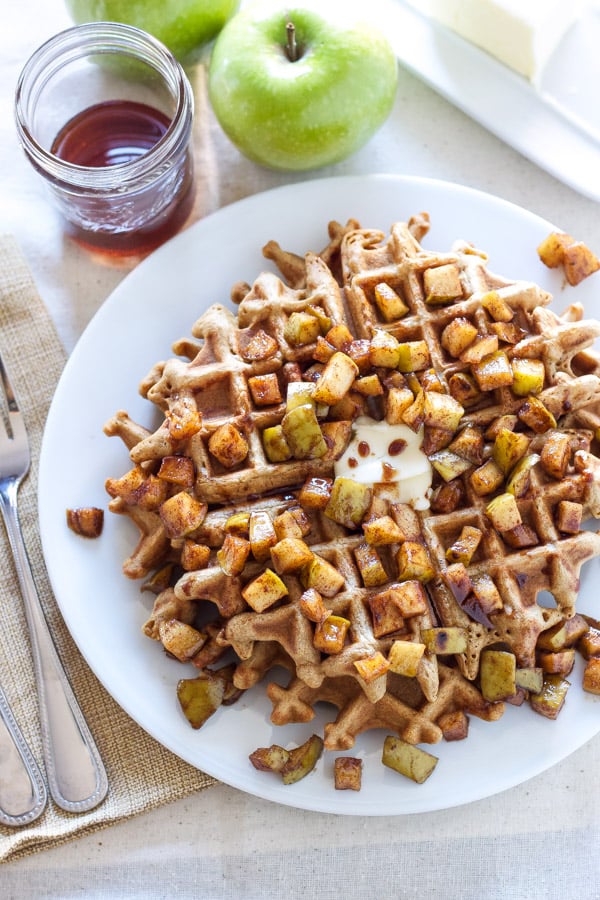 Waffles are a treat for me. I don’t usually find myself making them as often as I should. Usually I stick with some sort of omelet for breakfast, but on weekends or special ocassions I like to make a breakfast that is a little more special. Waffles are not only any easy breakfast to make, but they are so versatile as well. During the summer I made these Whole Wheat Waffles with Bourbon Peaches as a way to use some of Colorado’s amazing Palisade peaches and they were delicious! Now that fall is here and apples are in season, I’m trying to find any excuse to make something with them that I can.

In the past I have always added shredded or diced apple to the waffle batter, but this time I decided to make a special topping with them instead. I wanted the apple topping to remind me of apple pie filling and that is exactly what it did! To make the topping I simply melted some butter in a skillet over medium high heat then added in a diced apple. I then added in brown sugar and some cinnamon. After giving them a quick stir I let the apples caramelize in the pan for several minutes. They smelled incredible, just like apple pie! Once the apples were caramelized and softened, I removed the them from the heat while I made the waffles.

These waffles are similar to my Whole Wheat Waffles with Bourbon Peaches, but with a few modifications. First off, these are cinnamon waffles, so I used a generous amount of cinnamon in them, giving them a warm sweet flavor. Instead of using butter I changed it up and used olive oil, melted coconut oil would work as well. While the oil doesn’t create as crisp of waffles they are by no means flimsy and rubbery.

I also chose to use unsweetened vanilla almond milk to keep with the dairy free theme, but feel free to use whatever milk you have on hand or prefer. Next I separated the egg yolk from the white and whipped the egg white into stiff peaks. I find that it makes the waffles lighter and more airy. If you don’t have the patience for this step, no worries, you can just whisk the whole egg in with the rest of the wet ingredients. 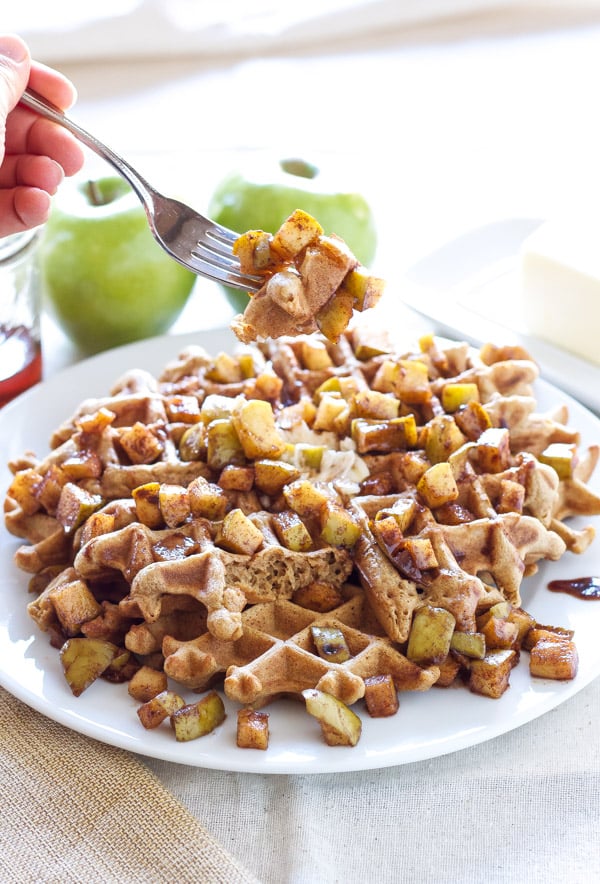 Once the waffles were done I topped them with the delicious apple topping  then drizzled on a little maple syrup for extra sweetness. The Cinnamon Waffles with Apple Topping were perfect! They were everything I wanted in a warm, carb loaded, fall breakfast. I can’t wait to make them again!

To Make the Cinnamon Waffles

To Make the Apple Topping

This website uses cookies to improve your experience while you navigate through the website. Out of these, the cookies that are categorized as necessary are stored on your browser as they are essential for the working of basic functionalities of the website. We also use third-party cookies that help us analyze and understand how you use this website. These cookies will be stored in your browser only with your consent. You also have the option to opt-out of these cookies. But opting out of some of these cookies may affect your browsing experience.
Necessary Always Enabled
Necessary cookies are absolutely essential for the website to function properly. These cookies ensure basic functionalities and security features of the website, anonymously.
Functional
Functional cookies help to perform certain functionalities like sharing the content of the website on social media platforms, collect feedbacks, and other third-party features.
Performance
Performance cookies are used to understand and analyze the key performance indexes of the website which helps in delivering a better user experience for the visitors.
Analytics
Analytical cookies are used to understand how visitors interact with the website. These cookies help provide information on metrics the number of visitors, bounce rate, traffic source, etc.
Advertisement
Advertisement cookies are used to provide visitors with relevant ads and marketing campaigns. These cookies track visitors across websites and collect information to provide customized ads.
Others
Other uncategorized cookies are those that are being analyzed and have not been classified into a category as yet.
SAVE & ACCEPT
Skip to Recipe
2715 shares