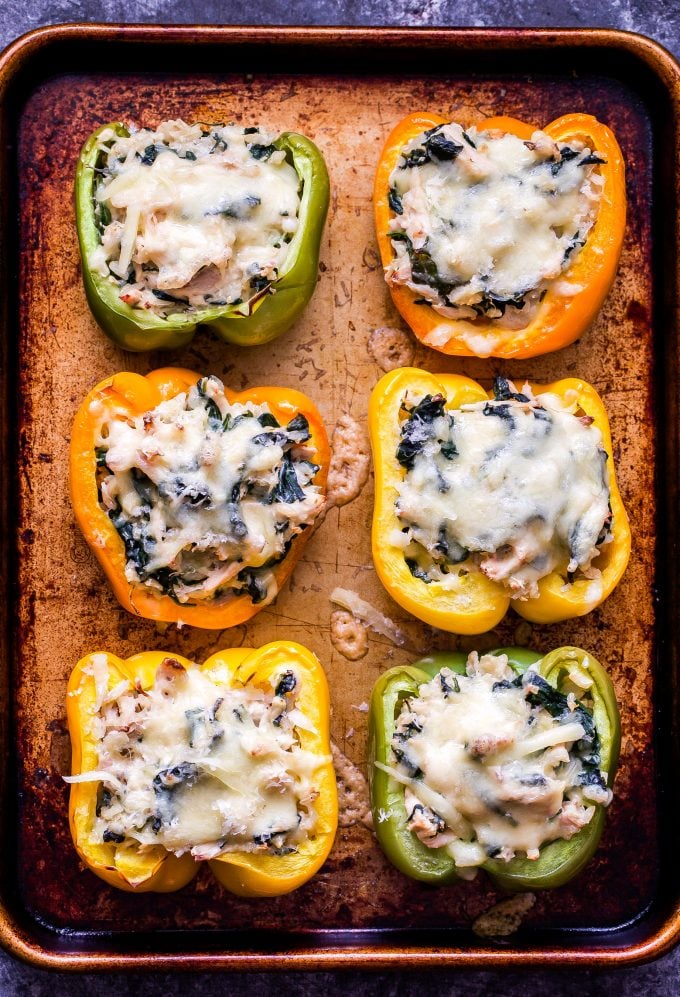 The last recipe I’m sharing for August. Can you believe that summer is almost over and fall officially starts in less than a month? Of course you’d never know it was still summer with all the pumpkin floating around. I say it every year, but you won’t see any pumpkin from me until fall officially starts. Until then, I’ve got a classic family friendly dinner with an updated filling, Creamy Chicken, Spinach and Rice Stuffed Peppers.

Stuffed peppers are a meal I’m sure many of us grew up eating. This stuffed pepper recipe is pretty similar to the one my mom would make. I’m still a big fan of the classic recipe, but sometimes I like to change things up and try a different filling. Filling options for stuffed peppers are limitless and I have a few variations of my own that you can find recipes for below. 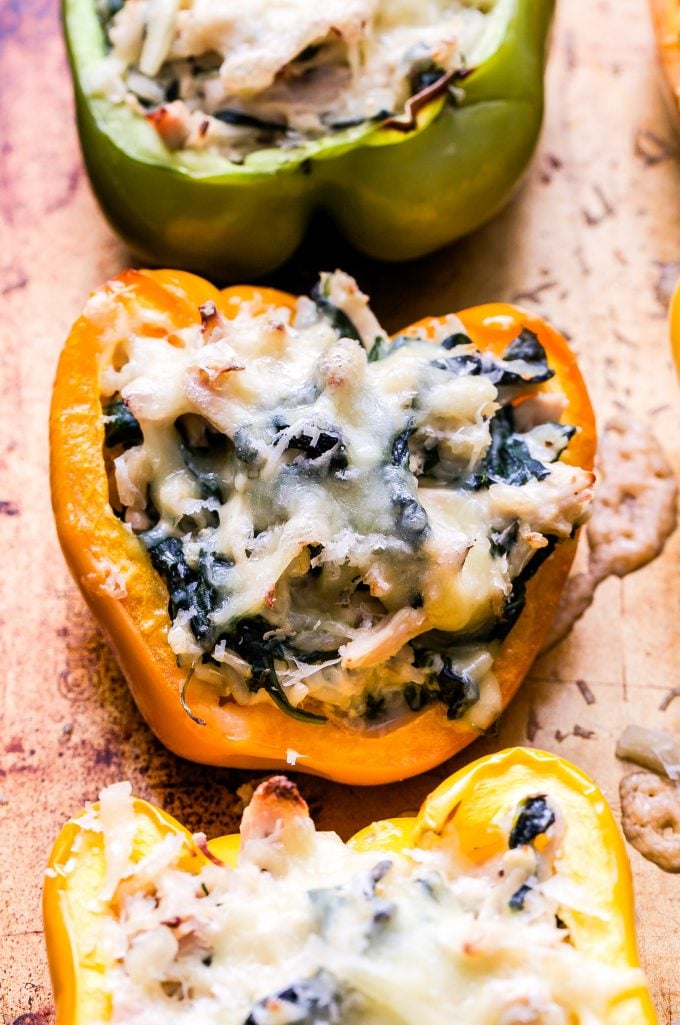 Some fillings that I’m excited to try out are these Mexican Stuffed Bell Peppers, Buffalo Chicken Stuffed Peppers and these Breakfast Stuffed Peppers. I never thought to make them for breakfast, but I absolutely love that idea!

The filling for these Creamy Chicken, Spinach and Rice Stuffed Peppers can be made ahead of time. That’s actually what I did when I made them the first time. They’ll just need a few extra minutes in the oven since the filling will be cold. Speaking of the filling let’s talk about how to make it.

The filling is very easy to make especially if you already have cooked chicken and rice on hand. I used leftover rotisserie chicken to save time and while I did make the rice, there’s been plenty of times that I’ve grabbed a packet of the rice you can just pop in the microwave for a minute. 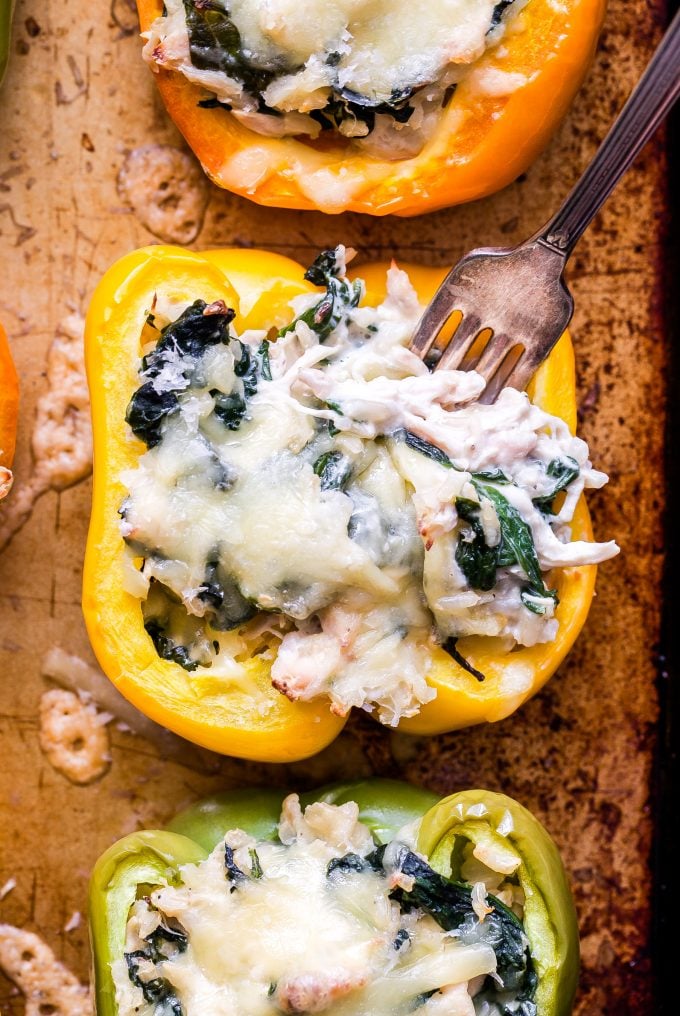 What Can I Substitute the Rice With?

If you’re out of rice or would like to substitute it with something else you have a couple options. Quinoa is a great substitution and I actually debated whether to use it or brown rice in this recipe. If you want a low carb option cauliflower rice would work well, although your filling may be a little runny due to the water content in cauliflower.

To make the filling, sauté minced shallot and garlic in a large pan that you have a lid for. Once they’ve softened, add in the spinach, stir and cover with the lid. It’s a lot of spinach, but it will wilt down significantly. After a minute or so remove the lid and stir in the shredded chicken, rice and room temperature cream cheese. 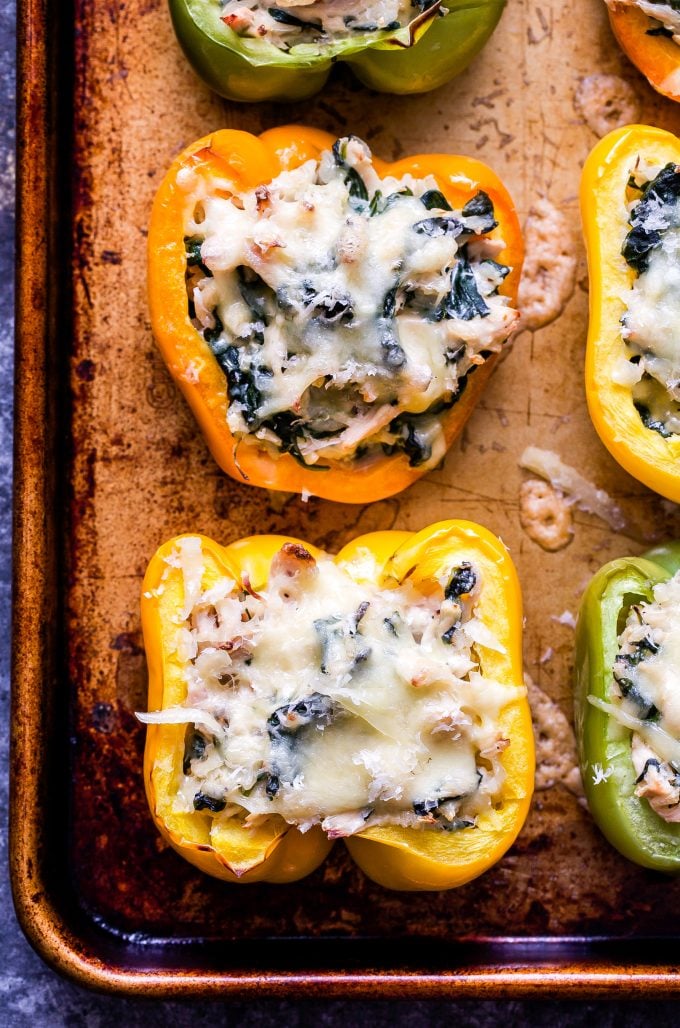 Once the cream cheese has melted into the mixture turn of the heat and stir in the mozzarella cheese and greek yogurt. Once everything is incorporated the filling should be thick and creamy. Divide the mixture evenly into the halved and hollowed out peppers and bake them in the oven.

You can bake the stuffed peppers on a sheet pan like I did or in a casserole dish. The peppers will bake for 30 minutes, then remove them from the oven and top them with the remaining cheese. Bake for another 10 minutes and serve. They’re creamy and similar in flavor to spinach dip with the addition of rice and chicken. It’s a great recipe to try when you’re looking to change up the usual stuffed pepper routine! 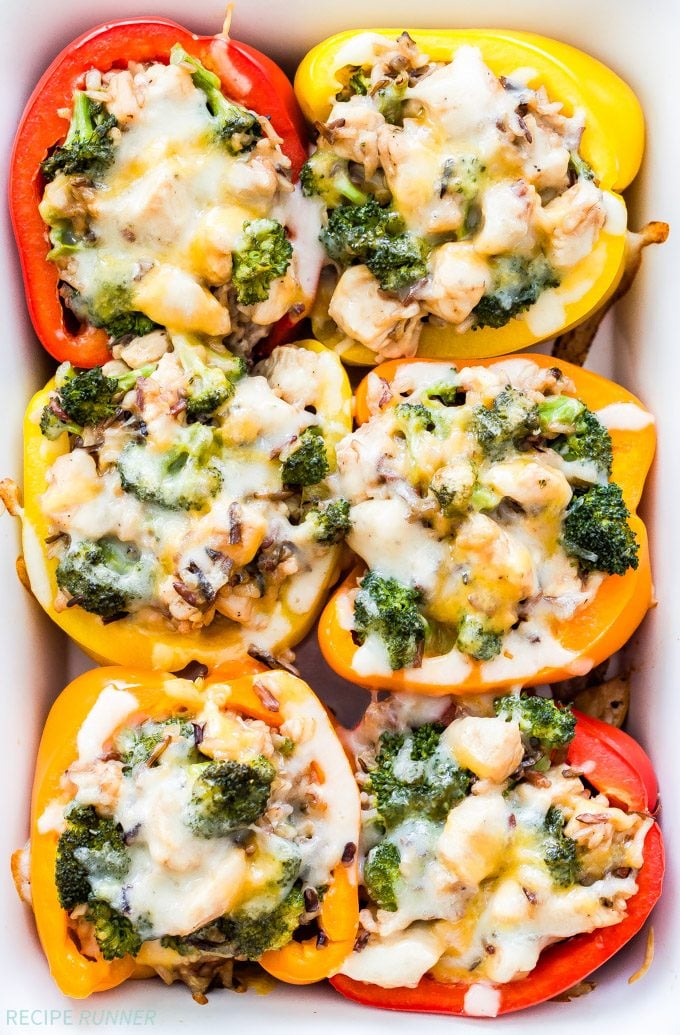 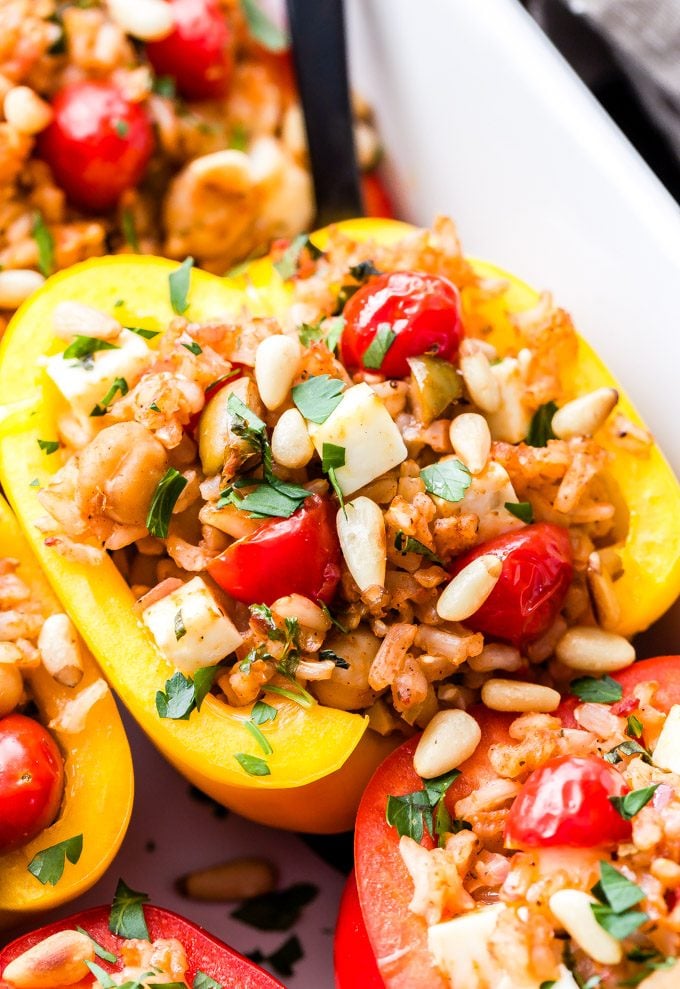 I packed the peppers pretty full with the filling. If you pack them less this recipe will easily make 8 stuffed pepper halves.

This website uses cookies to improve your experience while you navigate through the website. Out of these, the cookies that are categorized as necessary are stored on your browser as they are essential for the working of basic functionalities of the website. We also use third-party cookies that help us analyze and understand how you use this website. These cookies will be stored in your browser only with your consent. You also have the option to opt-out of these cookies. But opting out of some of these cookies may affect your browsing experience.
Necessary Always Enabled
Necessary cookies are absolutely essential for the website to function properly. These cookies ensure basic functionalities and security features of the website, anonymously.
Functional
Functional cookies help to perform certain functionalities like sharing the content of the website on social media platforms, collect feedbacks, and other third-party features.
Performance
Performance cookies are used to understand and analyze the key performance indexes of the website which helps in delivering a better user experience for the visitors.
Analytics
Analytical cookies are used to understand how visitors interact with the website. These cookies help provide information on metrics the number of visitors, bounce rate, traffic source, etc.
Advertisement
Advertisement cookies are used to provide visitors with relevant ads and marketing campaigns. These cookies track visitors across websites and collect information to provide customized ads.
Others
Other uncategorized cookies are those that are being analyzed and have not been classified into a category as yet.
SAVE & ACCEPT
Skip to Recipe
12851 shares