Did you watch the Oscars last night? I watched some of it, but as always I couldn’t make it to the end. The old lady in me was ready for bed before they announced who won best picture. That’s okay though because I did get to see some of the more entertaining things. I would have to say that Ellen Degeneres is one of the better Oscar hosts. I think she is so funny and I love her show. Ellen is one of those naturally funny people who doesn’t seem like they are trying hard to make people laugh. One of my favorite things she did last night was, take a picture with all the big wig actors and actresses right in the middle of the show. My husband and I of course had to retweet the picture, luckily we did it before Twitter shut down because of all the retweets! I also got a kick out of her ordering pizza and handing it out to everyone, and my favorite costume was when she was dressed as Glinda from the Wizard of Oz! Aside from the show itself I also enjoyed snacking on these maple bourbon roasted pecans. 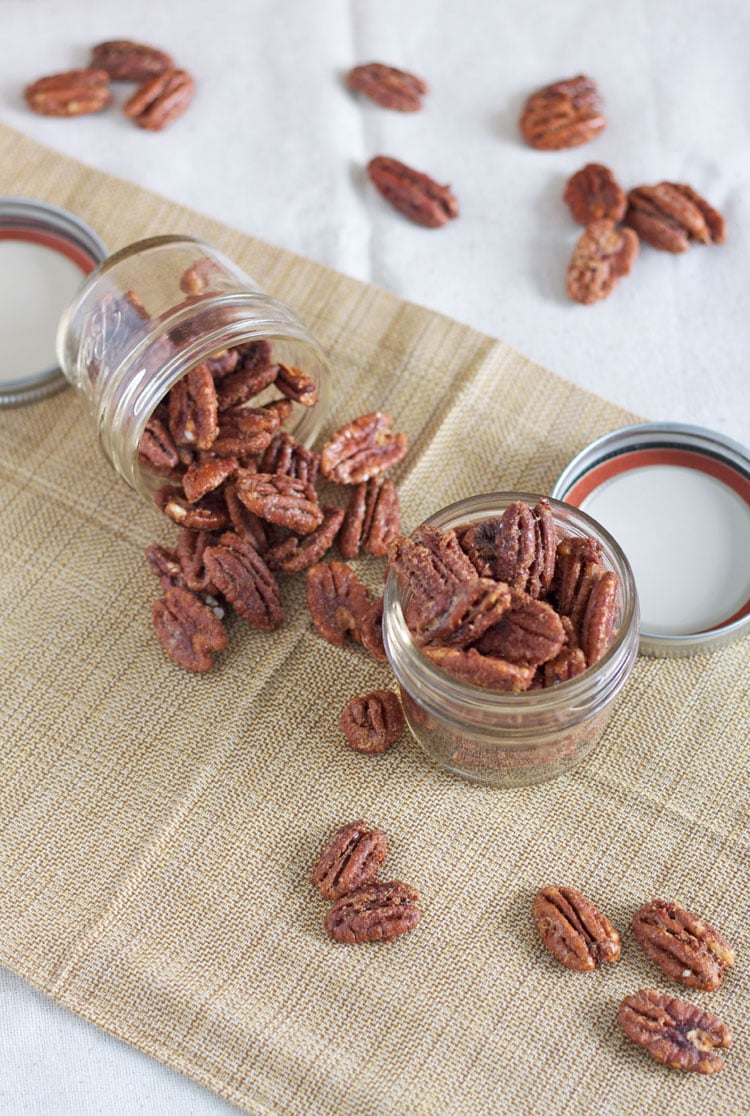 Last week you might remember that I shared a recipe for baked beignets with blackberry bourbon vanilla jam. Well thanks to making those there is now a big bottle of bourbon in the pantry needing to be used. 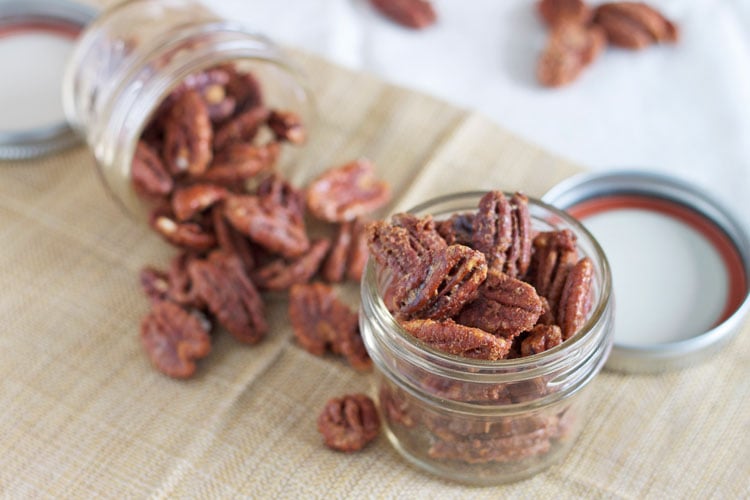 At Christmas time I like to make brown sugar and cinnamon toasted pecans and give them out as gifts, but since I had the bourbon I thought I would change the recipe up a little. 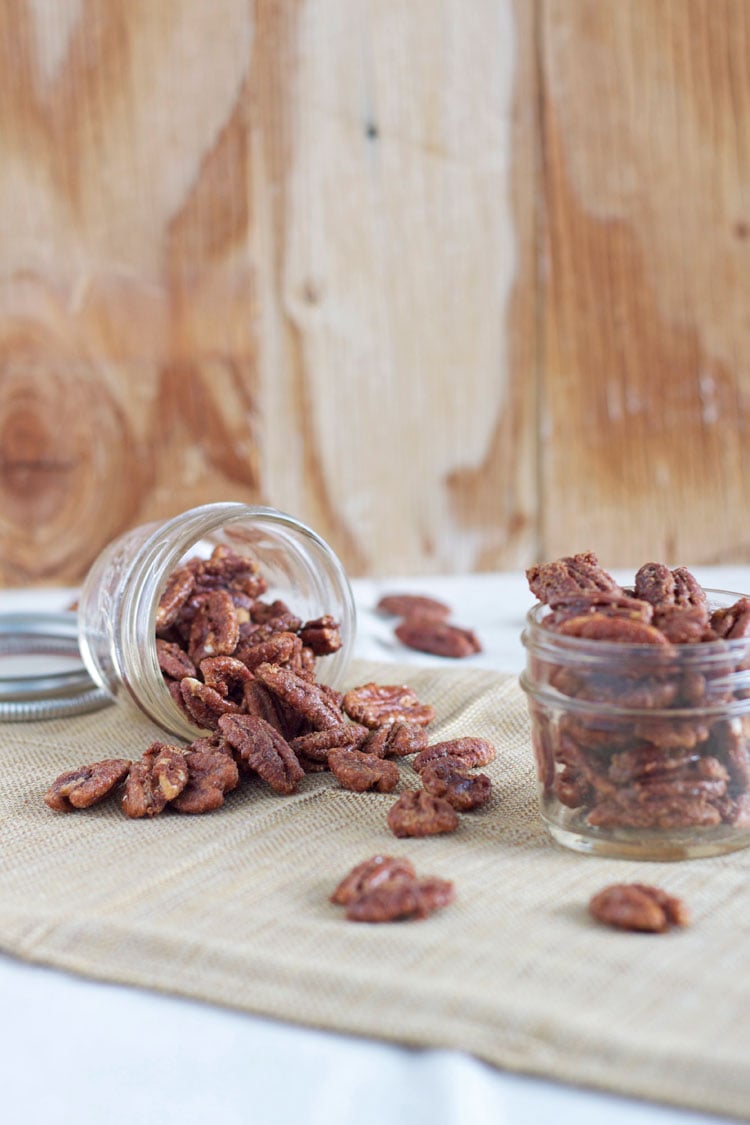 To make the maple bourbon roasted pecans I started by whipping an egg white until it was foamy. I then added in the bourbon, maple syrup (the real stuff, not pancake syrup), brown sugar, and a little salt. I whisked it all together until it was well combined and then added in the pecans. After the pecans were coated in the delicious mixture I poured them out onto a baking sheet lined with foil and sprayed with cooking spray. I roasted the pecans in the oven for about an hour, tossing them every 15 minutes. 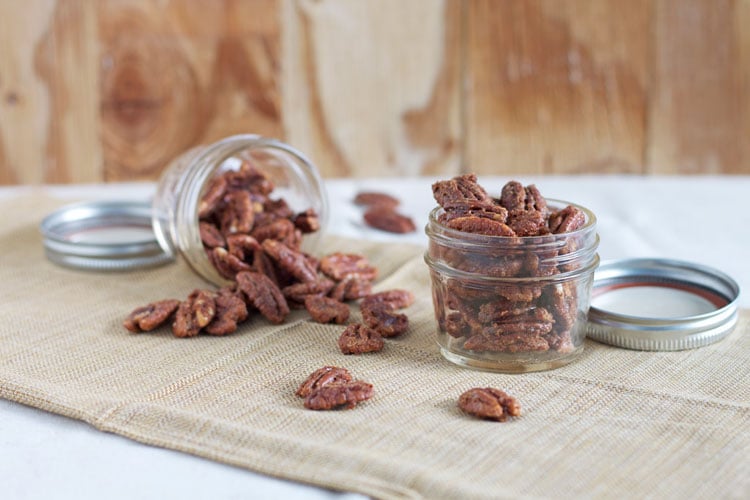 As they roasted in the oven the house was filled with a mouth watering smell of toasting nuts, bourbon, and maple, it was amazing! After the pecans came out of the oven I could hardly wait long enough for them to cool before popping a few in my mouth. They were perfectly crunchy, just sweet enough from the maple and brown sugar, and you could taste a hint of the bourbon flavor in them as well. These maple bourbon roasted pecans made a perfect snack to munch on while watching the Oscars last night and the good news is there are still some sitting in the kitchen. So, excuse me while I go have another handful of them!

Be sure to toss the pecans around on the baking sheet every 15 minutes so that they roast evenly. They will be very sticky at first, but will start to dry up the longer they bake.

This website uses cookies to improve your experience while you navigate through the website. Out of these, the cookies that are categorized as necessary are stored on your browser as they are essential for the working of basic functionalities of the website. We also use third-party cookies that help us analyze and understand how you use this website. These cookies will be stored in your browser only with your consent. You also have the option to opt-out of these cookies. But opting out of some of these cookies may affect your browsing experience.
Necessary Always Enabled
Necessary cookies are absolutely essential for the website to function properly. These cookies ensure basic functionalities and security features of the website, anonymously.
Functional
Functional cookies help to perform certain functionalities like sharing the content of the website on social media platforms, collect feedbacks, and other third-party features.
Performance
Performance cookies are used to understand and analyze the key performance indexes of the website which helps in delivering a better user experience for the visitors.
Analytics
Analytical cookies are used to understand how visitors interact with the website. These cookies help provide information on metrics the number of visitors, bounce rate, traffic source, etc.
Advertisement
Advertisement cookies are used to provide visitors with relevant ads and marketing campaigns. These cookies track visitors across websites and collect information to provide customized ads.
Others
Other uncategorized cookies are those that are being analyzed and have not been classified into a category as yet.
SAVE & ACCEPT
Skip to Recipe
4939 shares