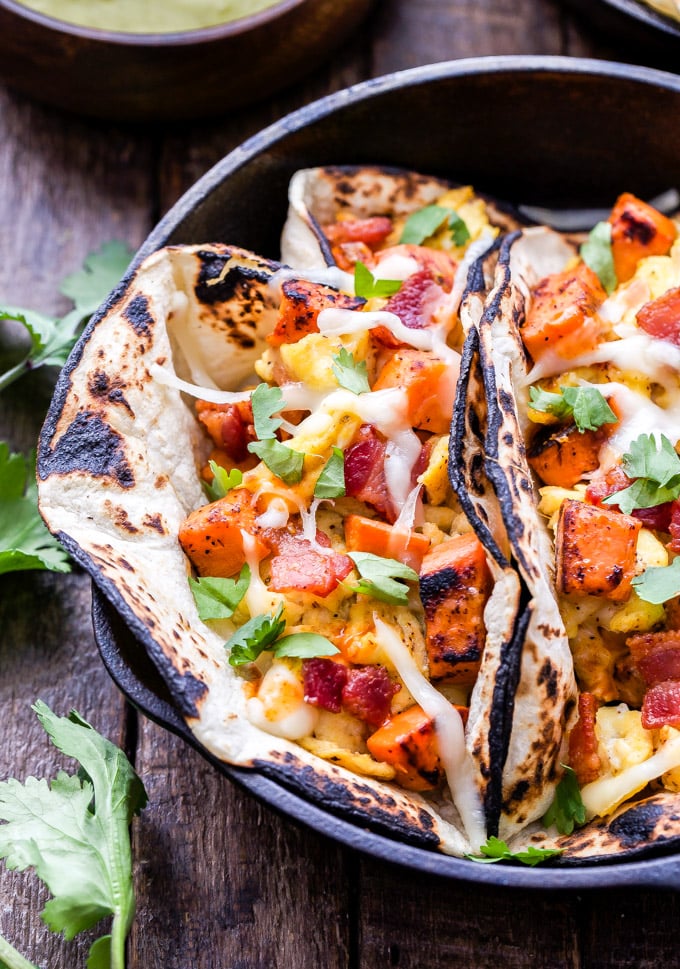 I decided it was about time for a new breakfast taco recipe, because they’re awesome and if you haven’t had one you’re missing out. After our Cinco de Mayo party I had a ton of corn tortillas leftover and what better way to use them than for these Sweet Potato, Bacon and Egg Breakfast Tacos! 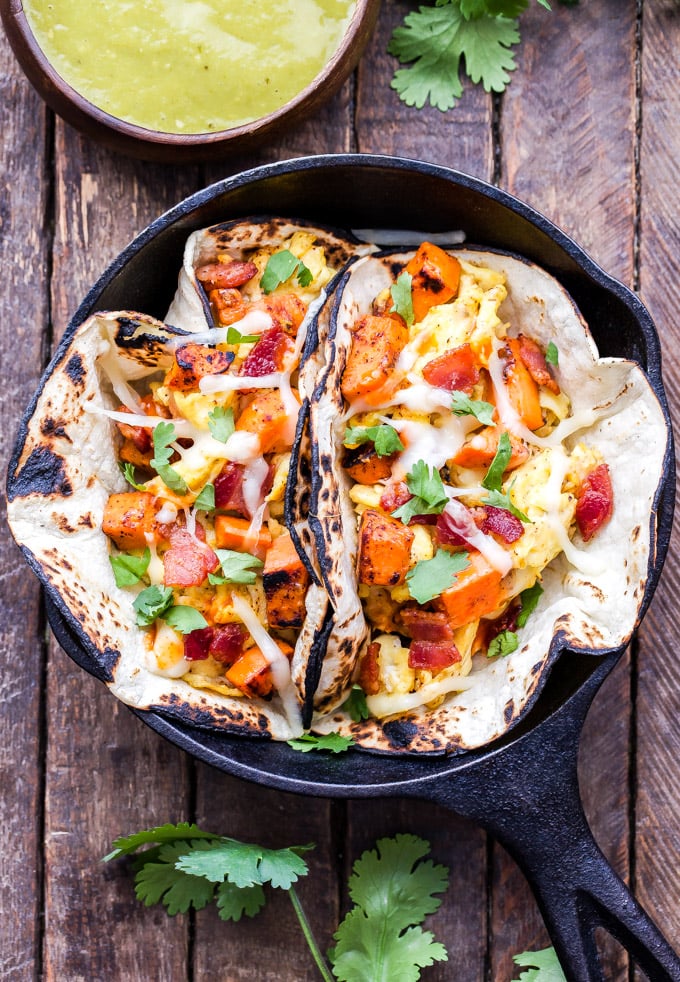 Why is it that there are only two options, if even that, on the amount of corn tortillas in a package. It’s either 12 if I’m lucky to find the brand I like that sells that amount, or 30+. Unless you’re having a party or have a really big family, I don’t see how anyone can use that many corn tortillas before they get stale.

That brings me to my next point. Why do they crumble and fall apart the day after you open the bag? You’d think that someone could make one that doesn’t split in half the second you pick up your taco to take a bite.

The only way I’ve found to keep my corn tortillas from falling apart is to grill/char them on one of the burners of our gas stove. I know there’s the method of frying them in oil for a few seconds, but that doesn’t really appeal to me. Oh well, third world problems, right? 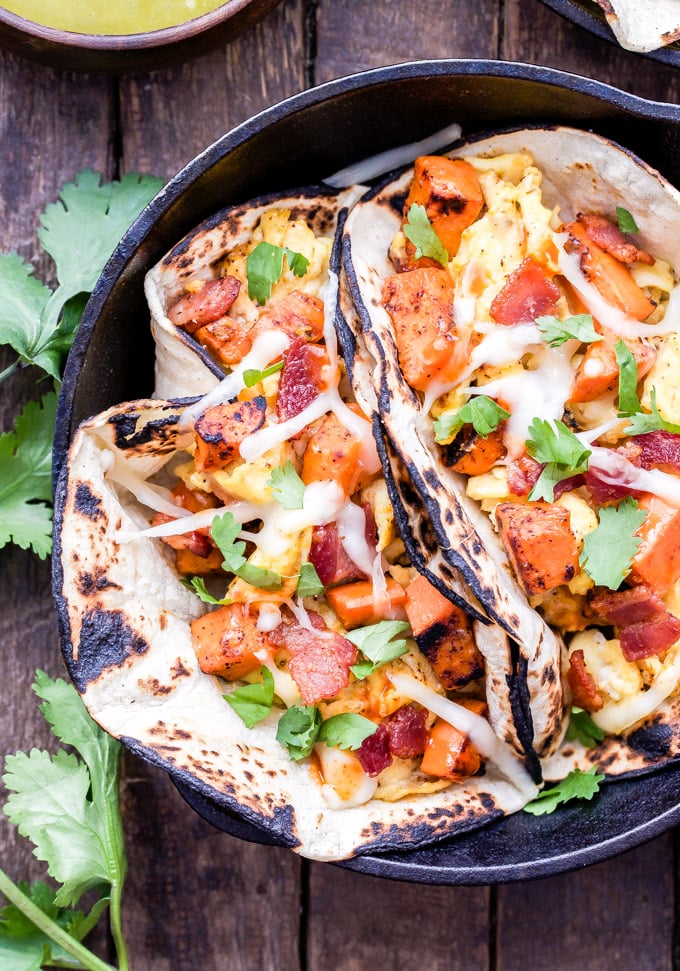 These Sweet Potato, Bacon and Egg Breakfast Tacos were something I just randomly decided to make one day. I was craving tacos and breakfast for dinner and happened to have everything on hand to make these, including at least 30 corn tortillas.

Bacon and eggs are an obvious breakfast combo, but the addition of the diced sweet potato added a nice touch of sweetness to this savory and spicy breakfast taco. I say spicy because I of course had to add in some chili powder and hot sauce.

Along with those few ingredients, there’s also ground cumin because where there’s chili powder there must be cumin. Monterey Jack cheese is melted into the eggs while they scramble and then the tacos are topped off with cilantro, more cheese and served with your favorite salsa. 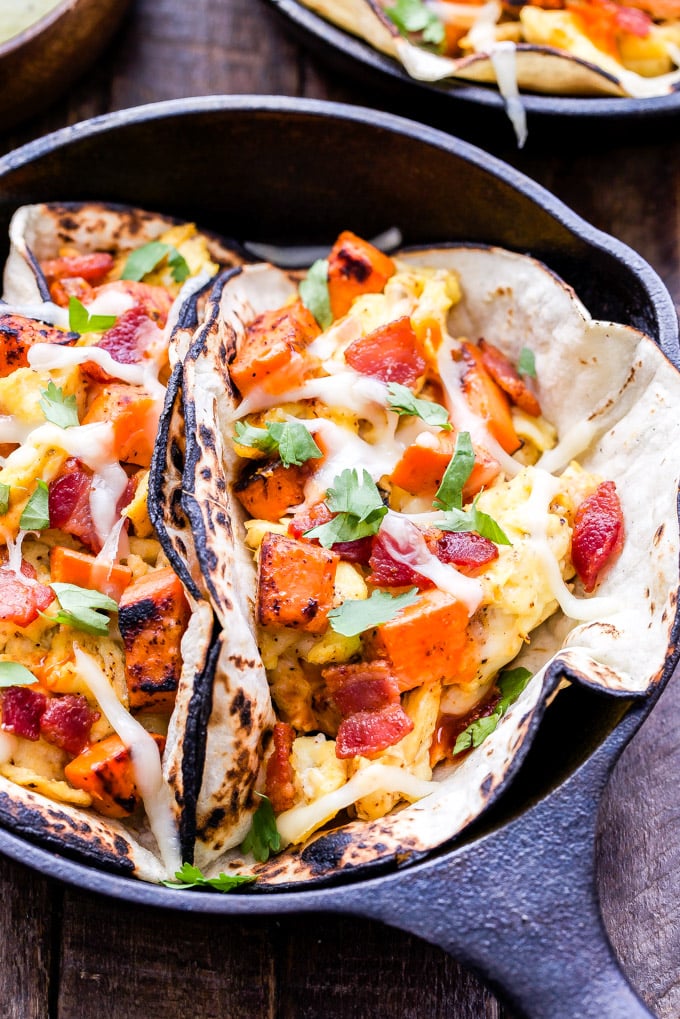 These Sweet Potato, Bacon and Egg Breakfast tacos are great for a lazy weekend breakfast or any night you’re craving brinner. If there’s any leftover filling, which I doubt there will be, it can easily be reheated the next day. 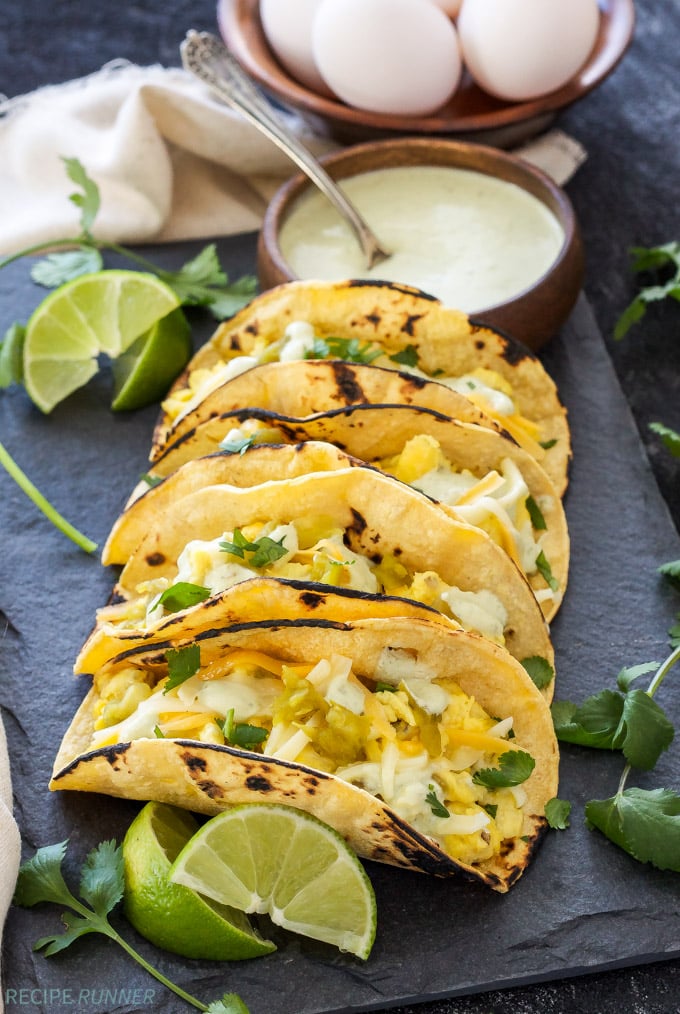 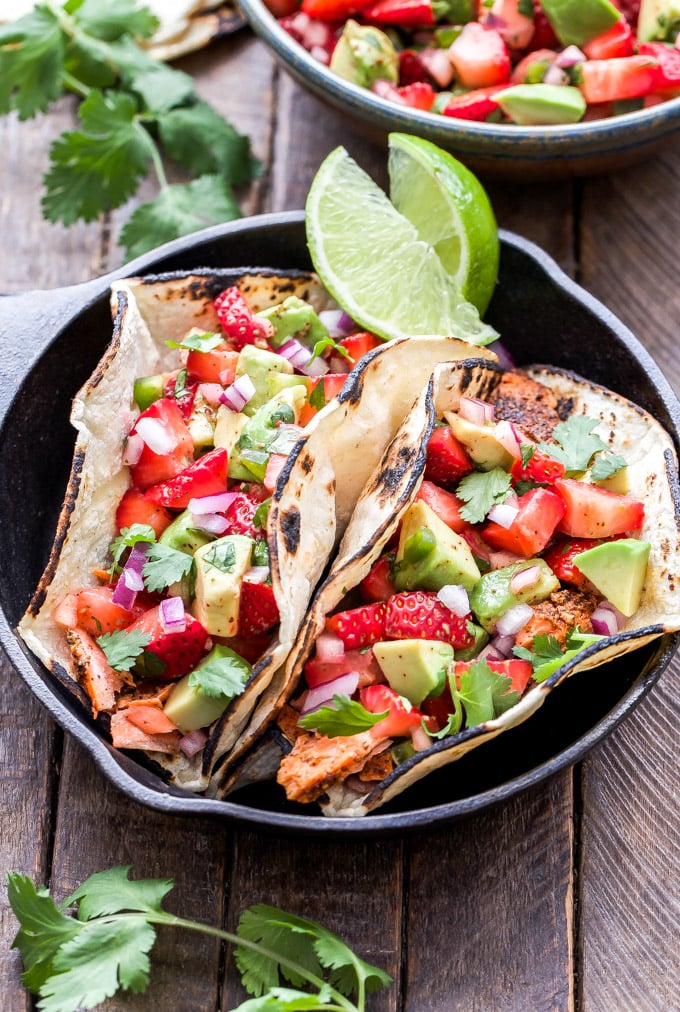 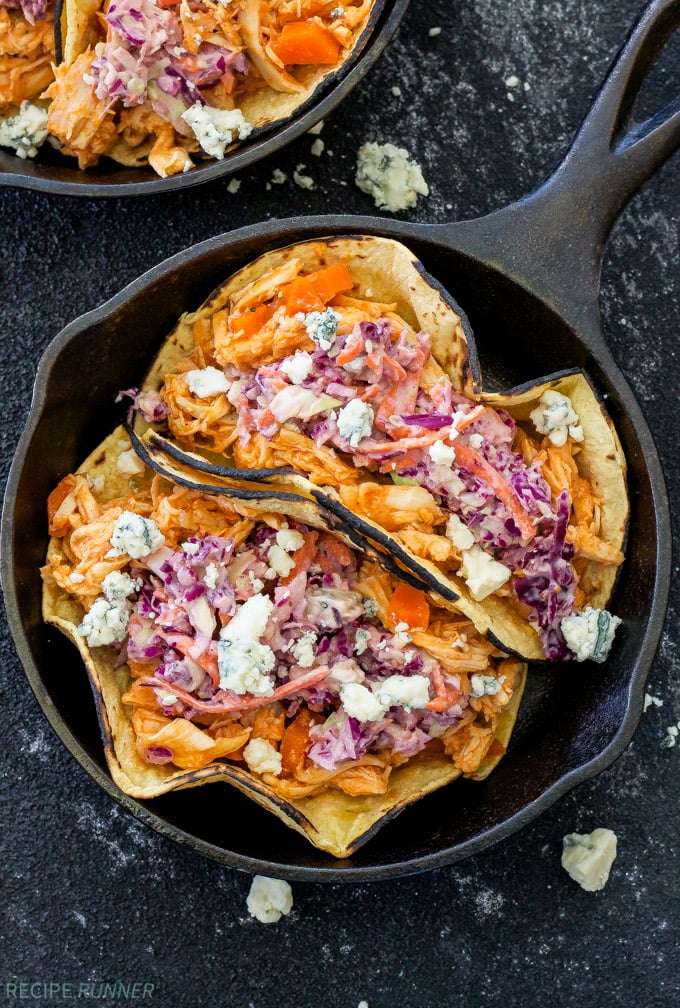 This website uses cookies to improve your experience while you navigate through the website. Out of these, the cookies that are categorized as necessary are stored on your browser as they are essential for the working of basic functionalities of the website. We also use third-party cookies that help us analyze and understand how you use this website. These cookies will be stored in your browser only with your consent. You also have the option to opt-out of these cookies. But opting out of some of these cookies may affect your browsing experience.
Necessary Always Enabled
Necessary cookies are absolutely essential for the website to function properly. These cookies ensure basic functionalities and security features of the website, anonymously.
Functional
Functional cookies help to perform certain functionalities like sharing the content of the website on social media platforms, collect feedbacks, and other third-party features.
Performance
Performance cookies are used to understand and analyze the key performance indexes of the website which helps in delivering a better user experience for the visitors.
Analytics
Analytical cookies are used to understand how visitors interact with the website. These cookies help provide information on metrics the number of visitors, bounce rate, traffic source, etc.
Advertisement
Advertisement cookies are used to provide visitors with relevant ads and marketing campaigns. These cookies track visitors across websites and collect information to provide customized ads.
Others
Other uncategorized cookies are those that are being analyzed and have not been classified into a category as yet.
SAVE & ACCEPT
Skip to Recipe
2185 shares