These happened Monday night for dinner! 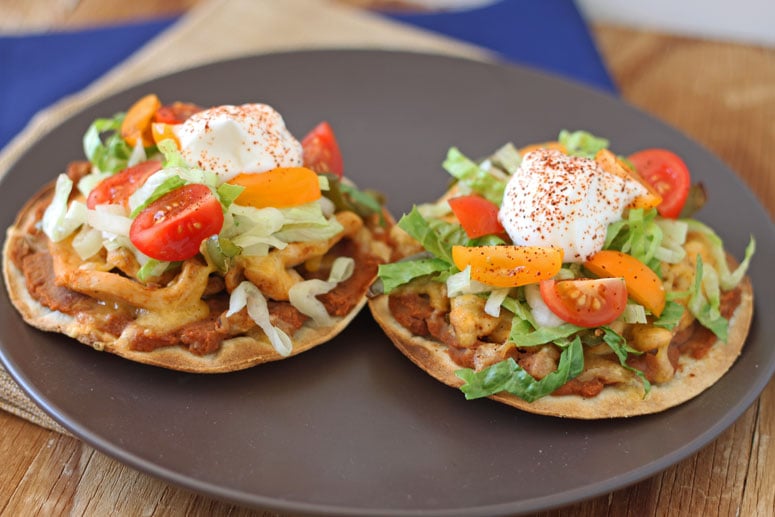 I’d been craving some Mexican food and since Highlands Ranch is lacking in good Mexican restaurants my options are to drive to Denver for good choices or make my own, I went with the later. 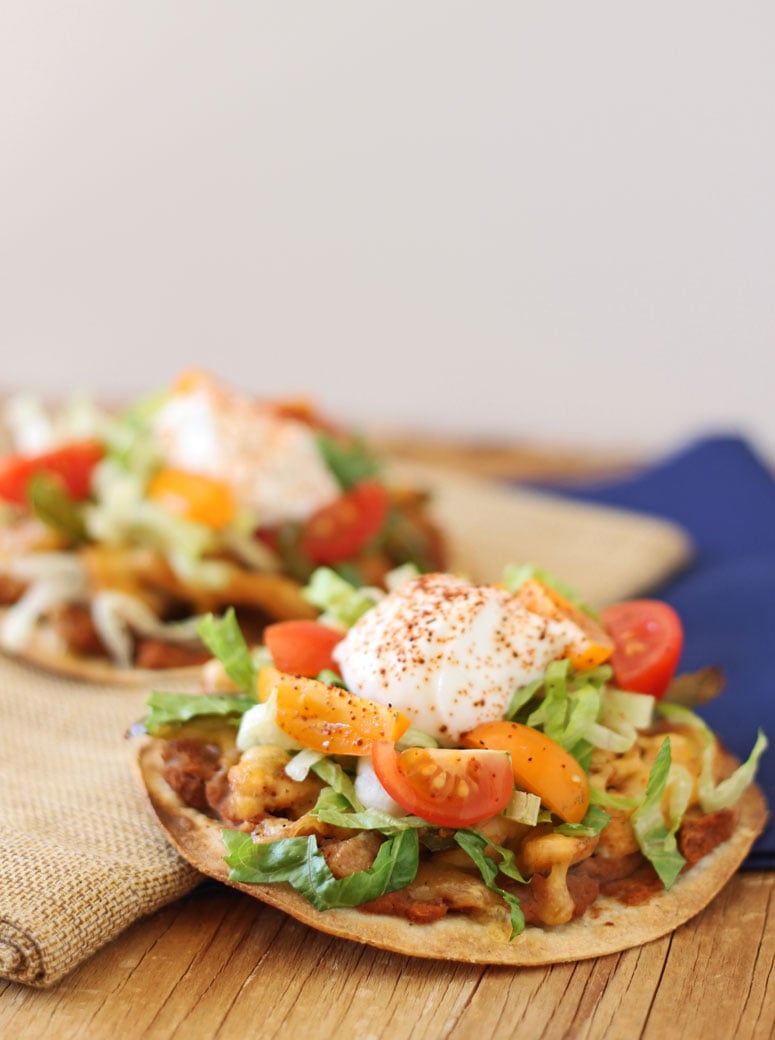 I originally just planned to make fajitas, but then I got to thinking about the last time I had a tostada. I couldn’t even remember the last time that was, and so chicken fajitas turned into Chicken Fajita Tostadas. They were delicious! 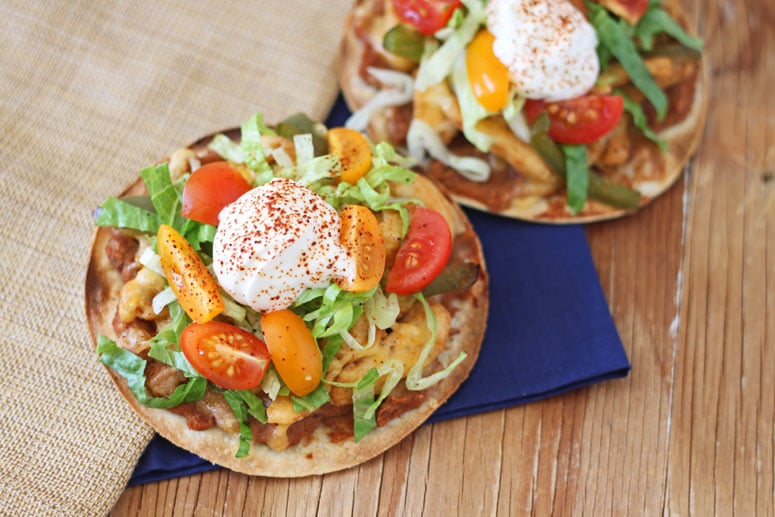 I loved the crispiness of the corn tortilla, the layer of refried beans, and the flavorful fajita spices on the chicken and bell peppers. To make these Chicken Fajita Tostadas I started by taking corn tortillas, giving them a light spray with some cooking spray and then broiling them in the oven until they became crisp, about 4 minutes per side. Next I made my chicken and bell pepper marinade. This was a combination of a teaspoon of oil, chili powder, cumin, salt, oregano, garlic powder, 2 green onions, and Cholula. I let the flavors meld together in the fridge for about 15 minutes. Once the chicken was ready I heated my cast iron skillet, threw on the chicken mixture and let it sizzle away. I heated my refried beans up in the microwave, grated some cheese, and chopped up some lettuce and tomato. When the chicken was almost done cooking I squeezed on the juice of half a lemon. To assemble the Chicken Fajita Tostadas I spread on a layer of the beans, a large spoonful of the chicken mixture, and a little cheese. I then stuck them back in the oven to broil and get the cheese nice and bubbly brown. Once they were done I topped them with lettuce, tomatoes, and a dollop of sour cream (plain Greek yogurt is also good). Wahla! Chicken Fajita Tostadas are born. 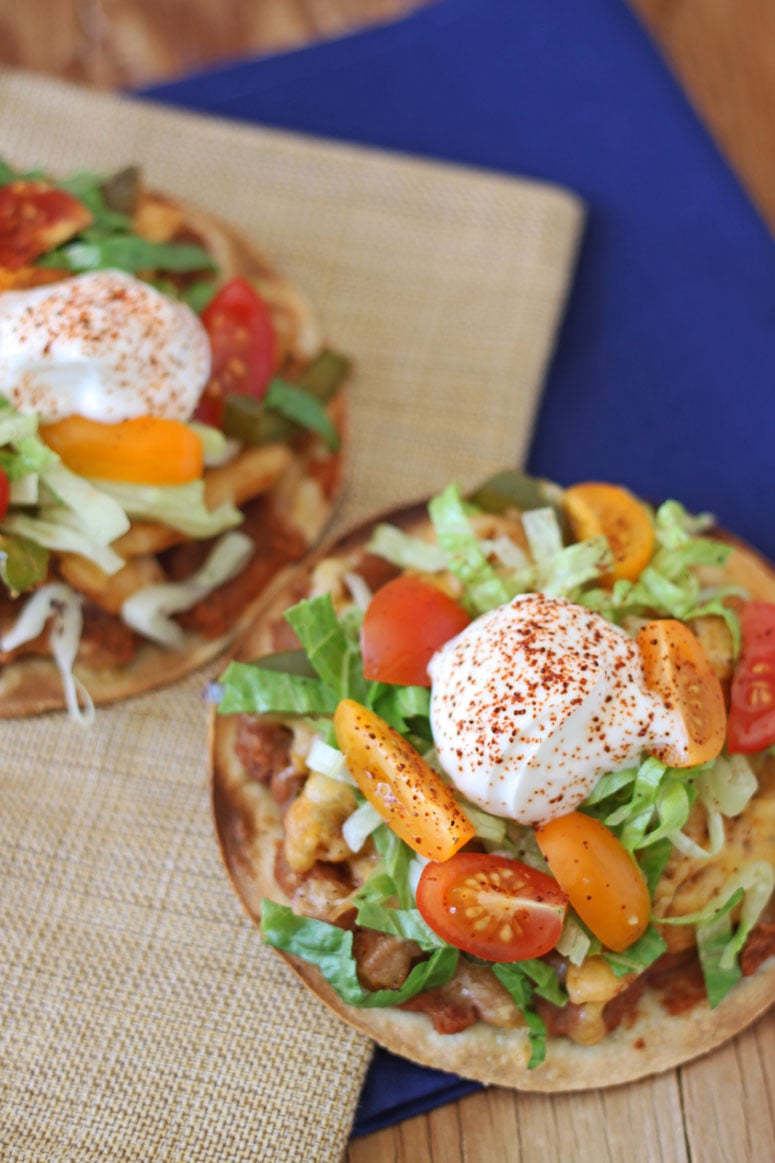 Not only were they easy to make, but they were incredibly flavorful! These tasty tostadas beat any tostada you can buy around here in Highlands Ranch!

This website uses cookies to improve your experience while you navigate through the website. Out of these, the cookies that are categorized as necessary are stored on your browser as they are essential for the working of basic functionalities of the website. We also use third-party cookies that help us analyze and understand how you use this website. These cookies will be stored in your browser only with your consent. You also have the option to opt-out of these cookies. But opting out of some of these cookies may affect your browsing experience.
Necessary Always Enabled
Necessary cookies are absolutely essential for the website to function properly. These cookies ensure basic functionalities and security features of the website, anonymously.
Functional
Functional cookies help to perform certain functionalities like sharing the content of the website on social media platforms, collect feedbacks, and other third-party features.
Performance
Performance cookies are used to understand and analyze the key performance indexes of the website which helps in delivering a better user experience for the visitors.
Analytics
Analytical cookies are used to understand how visitors interact with the website. These cookies help provide information on metrics the number of visitors, bounce rate, traffic source, etc.
Advertisement
Advertisement cookies are used to provide visitors with relevant ads and marketing campaigns. These cookies track visitors across websites and collect information to provide customized ads.
Others
Other uncategorized cookies are those that are being analyzed and have not been classified into a category as yet.
SAVE & ACCEPT
Skip to Recipe
529 shares