Cranberry Apple French Toast Casserole is the perfect sweet addition to your Christmas morning breakfast or brunch! Studded with sweet cinnamon apples, tart cranberries and drizzled with vanilla glaze. Make it the night before and bake it in the morning! 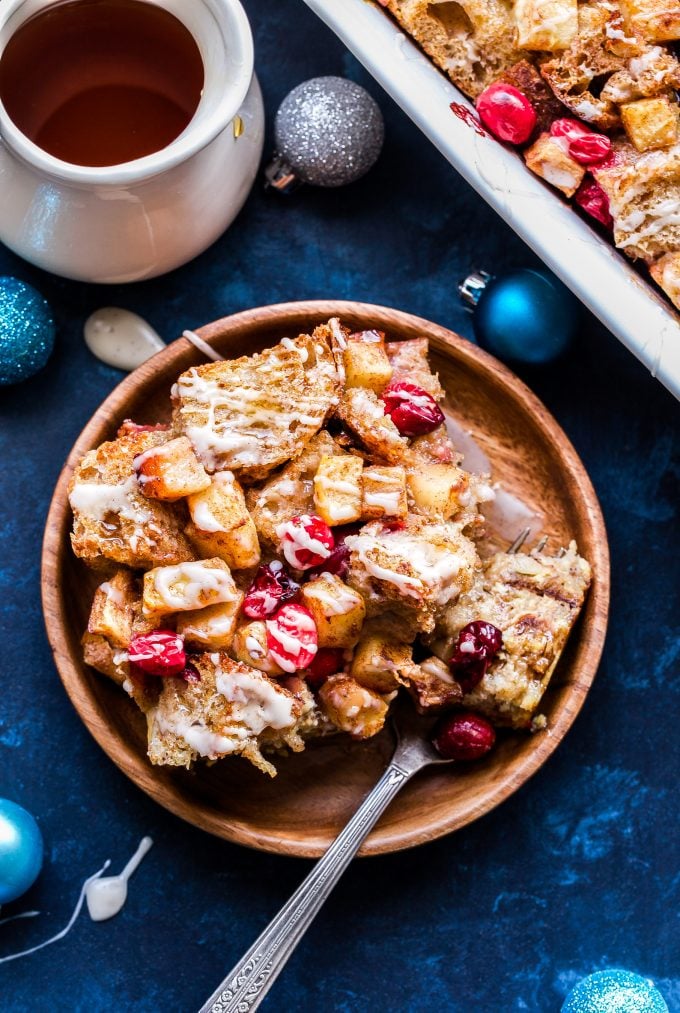 Are you more into Christmas morning breakfast or dinner? I get far more excited about breakfast! I feel like the big fancy dinner is for Thanksgiving and Christmas is all about breakfast and brunch. This year I’ll be serving this easy Cranberry Apple French Toast Casserole.

I like to have one savory breakfast item, like this Sheet Pan Spinach Tomato Ricotta Frittata or this Crustless Sausage, Kale and Ricotta Quiche. Then to go with that, something sweet. In previous years it’s been this Cranberry Maple Pecan Baked Oatmeal or a loaf of this Cranberry Orange Yogurt Cake. However this year, it’s all about this Cranberry Apple French Toast Casserole! 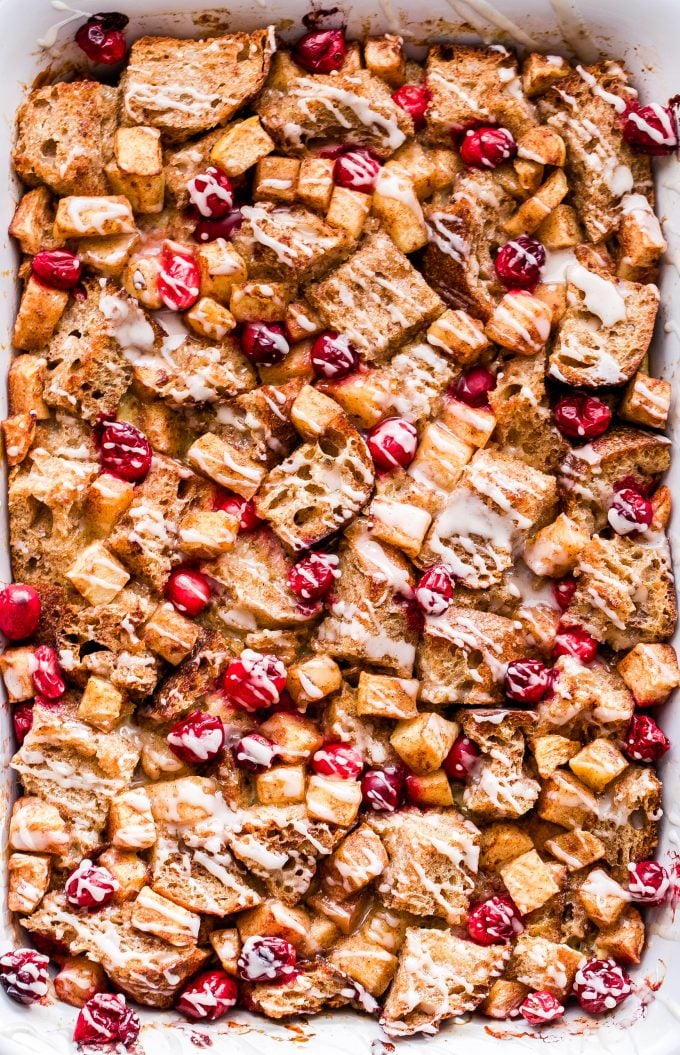 What Do I Need to Make the French Toast Casserole? 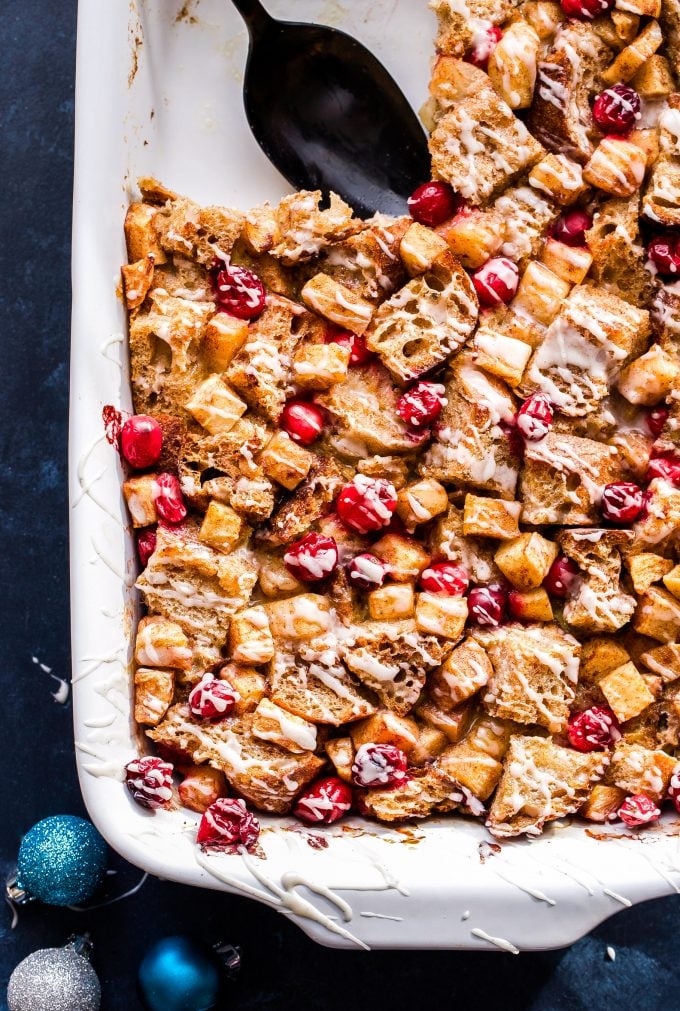 If you’re thinking about making this French toast casserole for Christmas morning or anytime, keep in mind that you’ll want the bread to be dried out. This isn’t the time to use a fresh loaf of bread because it will turn out too soggy. If you don’t have a loaf of bread that’s a few days old you can dry it out in the oven.

If you’re drying the bread out in the oven, which is what I did, set the oven to 300° F. Cut the bread into approximately one inch cubes and spread them out into an even layer on a baking sheet. Bake the bread cubes for about 5 minutes, give them a toss and bake for another 5 minutes. Let them cool before assembling the casserole. 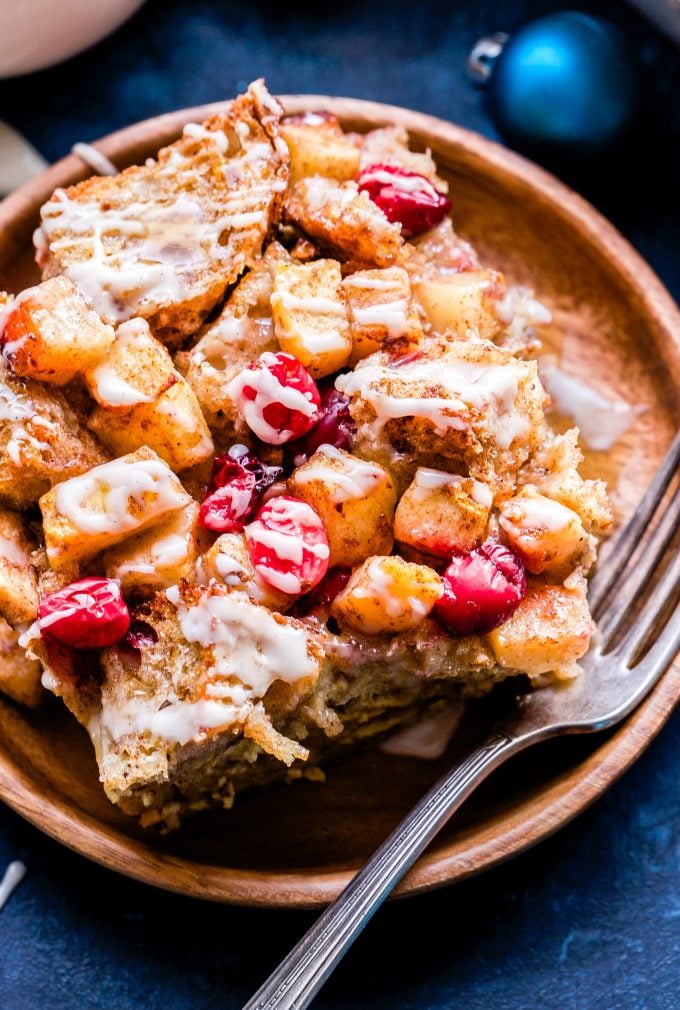 Can I Make This the Night Before Serving?

Yes! This is one of those wonderful breakfast recipes that can be made the night before so you don’t have to get up at 4:00am and start cooking. Be sure to allow 30-60 minutes in the morning to pull the casserole out of the refrigerator and let it come to room temperature before putting it in the oven. If you don’t want to make the casserole the night before, make a note that it will need to soak in the egg mixture for 2-3 hours before baking it.

The version I made is not gluten-free. However, it can easily be made gluten-free by swapping the whole wheat French bread with your favorite gluten-free bread. Again, be sure that the bread is dried out. 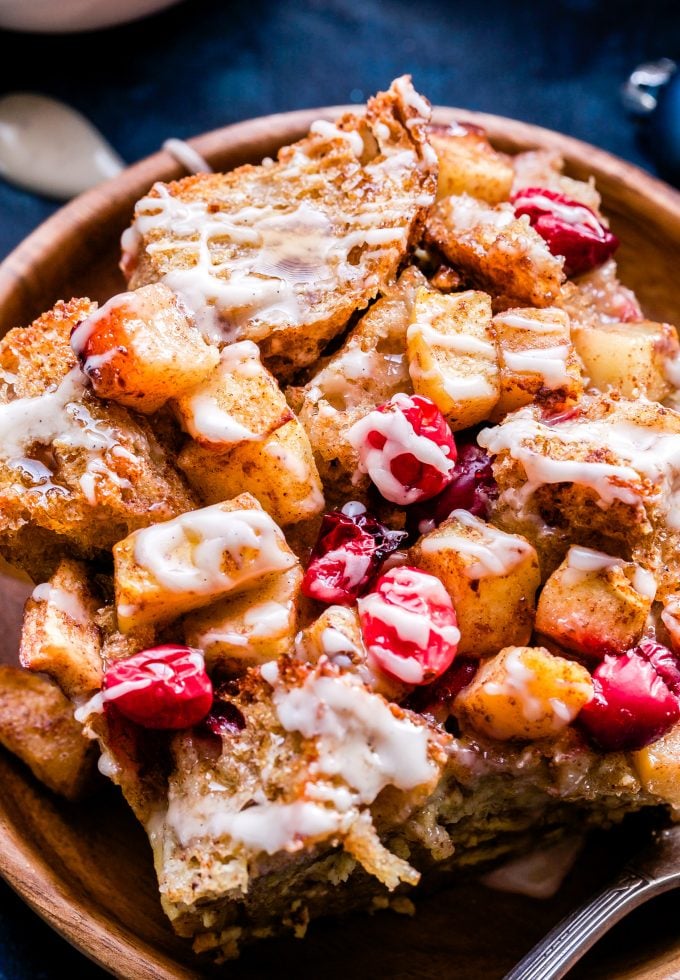 How to Make the Cranberry Apple French Toast Casserole

There are three main steps to making this recipe. First is to cut the bread into cubes and dry them out if necessary. Next, melt the butter in a skillet and add in the diced apples, maple syrup, cinnamon and allspice. Sauté the apples for 4-5 minutes or until they’re just tender, not mushy. The last step is to whisk together the eggs, milk, maple syrup, cinnamon, allspice and vanilla.

A note on the milk. I used 2% milk. If you want the casserole to be more rich, use whole milk, half and half or a combination of any of these. For a dairy-free version, I suggest using unsweetened vanilla almond milk and substituting the butter with coconut oil. 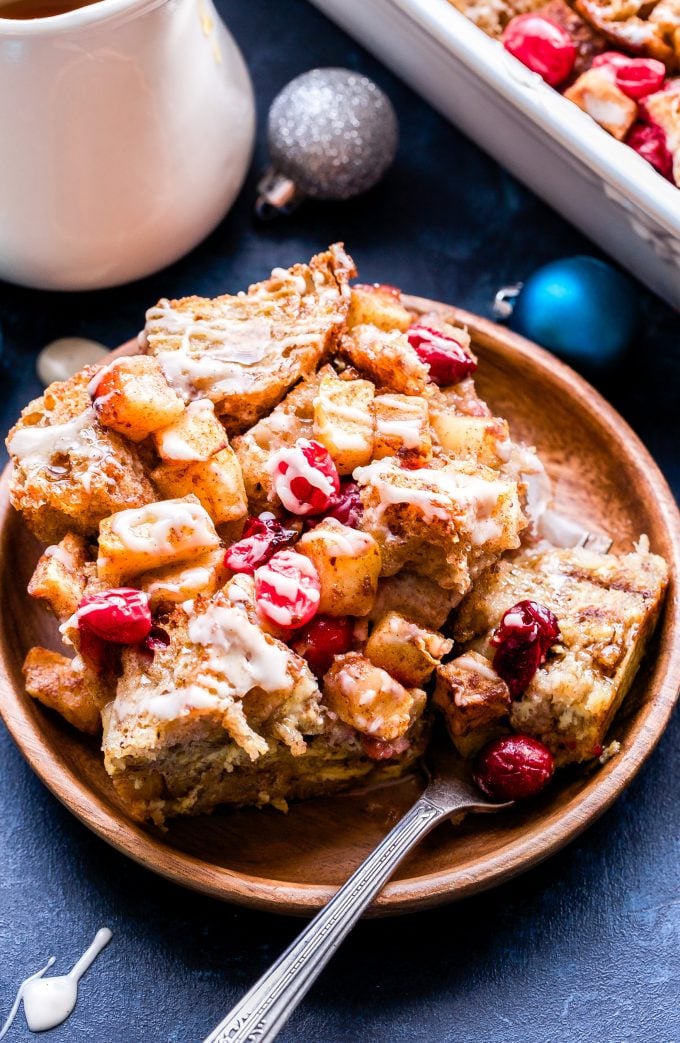 To assemble the French toast casserole, take half of the bread cubes and arrange them into a single layer in the bottom of a 9×13 baking dish. Top the bread with half of the apple mixture and half of the cranberries. Make a second layer repeating those steps. Pour the egg mixture evenly over the entire casserole and then use your hands to press the bread down so everything is coated in the liquid. Cover with plastic wrap and refrigerate it for 2-3 hours or overnight.

The casserole will need about an hour to bake and don’t forget to let it sit out and come to room temperature before putting it in the oven. To make this casserole extra special for Christmas morning I drizzled it with a vanilla glaze. If you don’t want to bother with that just serve it topped with maple syrup. 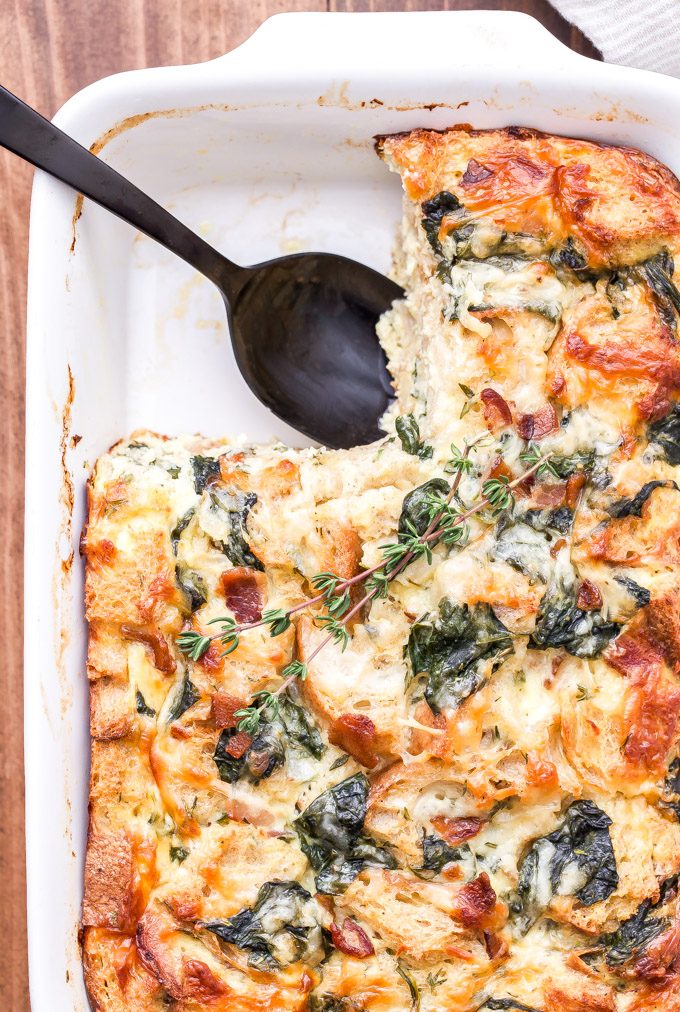 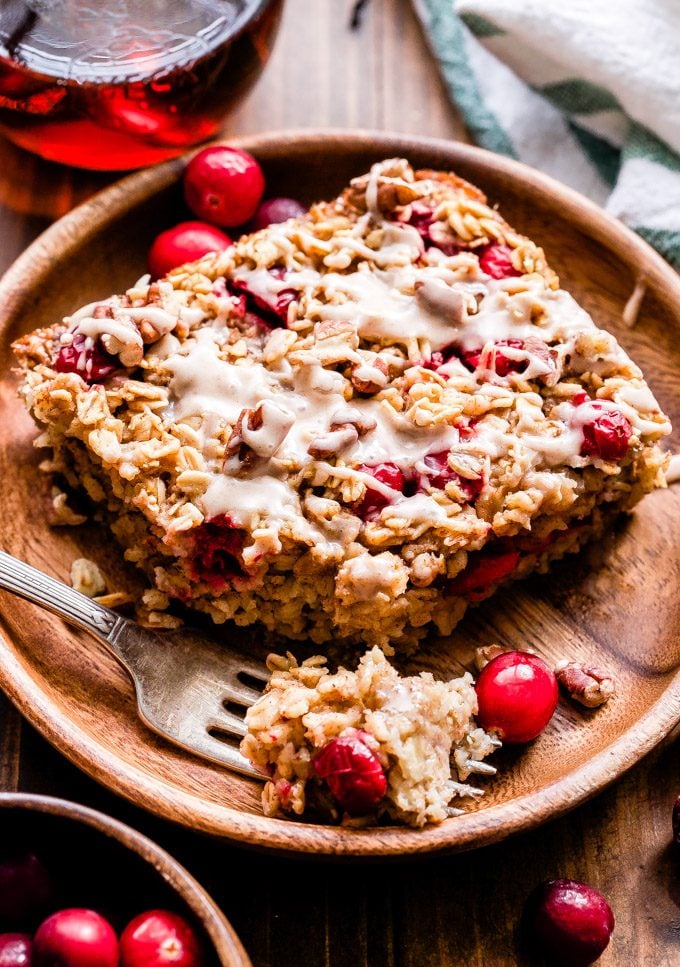 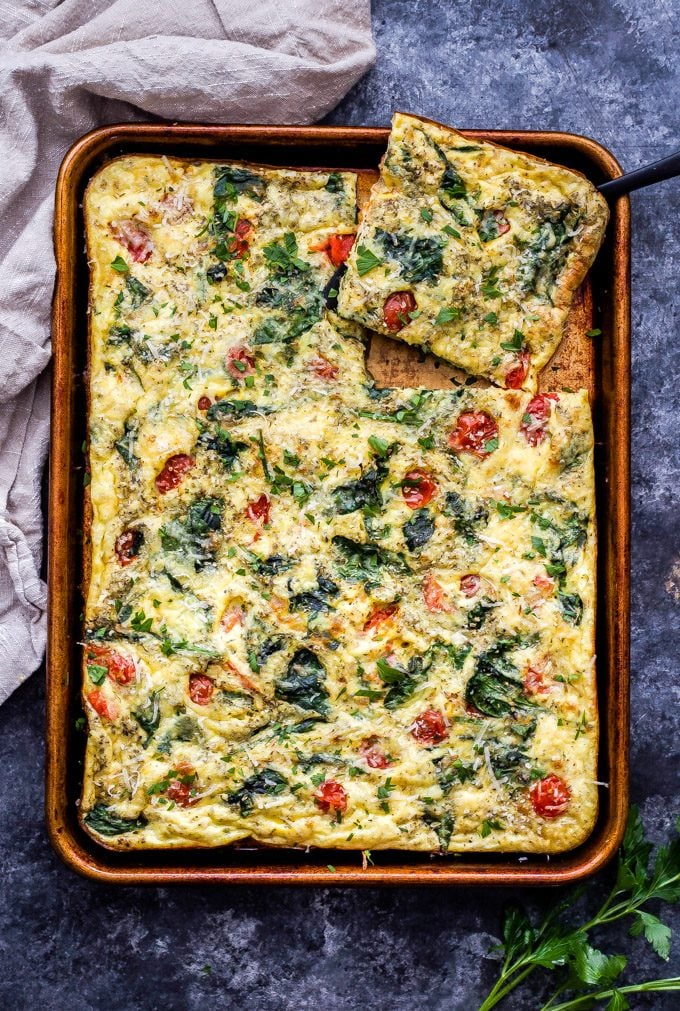 Vanilla glaze is not included in the nutritional information.

This website uses cookies to improve your experience while you navigate through the website. Out of these, the cookies that are categorized as necessary are stored on your browser as they are essential for the working of basic functionalities of the website. We also use third-party cookies that help us analyze and understand how you use this website. These cookies will be stored in your browser only with your consent. You also have the option to opt-out of these cookies. But opting out of some of these cookies may affect your browsing experience.
Necessary Always Enabled
Necessary cookies are absolutely essential for the website to function properly. These cookies ensure basic functionalities and security features of the website, anonymously.
Functional
Functional cookies help to perform certain functionalities like sharing the content of the website on social media platforms, collect feedbacks, and other third-party features.
Performance
Performance cookies are used to understand and analyze the key performance indexes of the website which helps in delivering a better user experience for the visitors.
Analytics
Analytical cookies are used to understand how visitors interact with the website. These cookies help provide information on metrics the number of visitors, bounce rate, traffic source, etc.
Advertisement
Advertisement cookies are used to provide visitors with relevant ads and marketing campaigns. These cookies track visitors across websites and collect information to provide customized ads.
Others
Other uncategorized cookies are those that are being analyzed and have not been classified into a category as yet.
SAVE & ACCEPT
Skip to Recipe
963 shares