This Cranberry Maple Pecan Baked Oatmeal is perfect for Christmas morning or anytime you need a warm, cozy breakfast!

I’m already starting to think about Christmas morning breakfast, which by the time we get around to eating is more like brunch. For me, breakfast is way more exciting that Christmas dinner. Then again, I’m a breakfast lover through and through.

Growing up there were two things that were always on the table Christmas morning, an egg casserole, my favorite Christmas morning smoothie and usually cranberry orange muffins or some kind of baked good. It was my favorite breakfast of the year, but that also could have been because my mom only made it once a year. 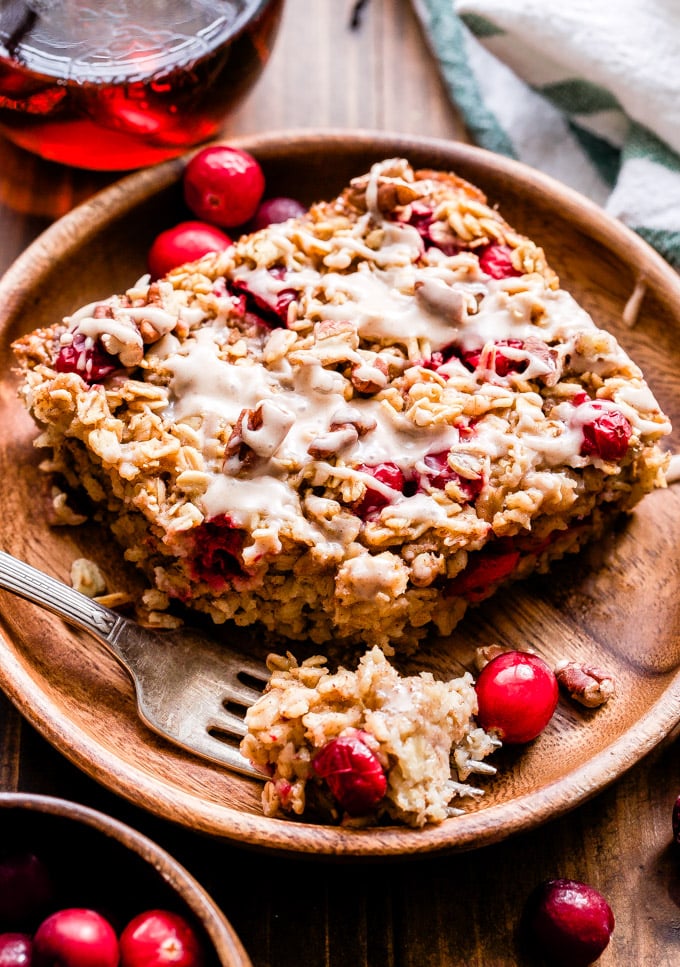 This year I plan to keep with the tradition, but instead of muffins I’ll be making this Cranberry Maple Pecan Baked Oatmeal complete with a cinnamon maple glaze because it’s the holidays and go big or go home, right?

I have quite a few baked oatmeal recipes on the blog, but this Cranberry Maple Pecan Baked Oatmeal is my favorite. My husband happened to be home from work with my cold that I blessed him with the day I photographed it and actually got to have a piece while it was still warm. 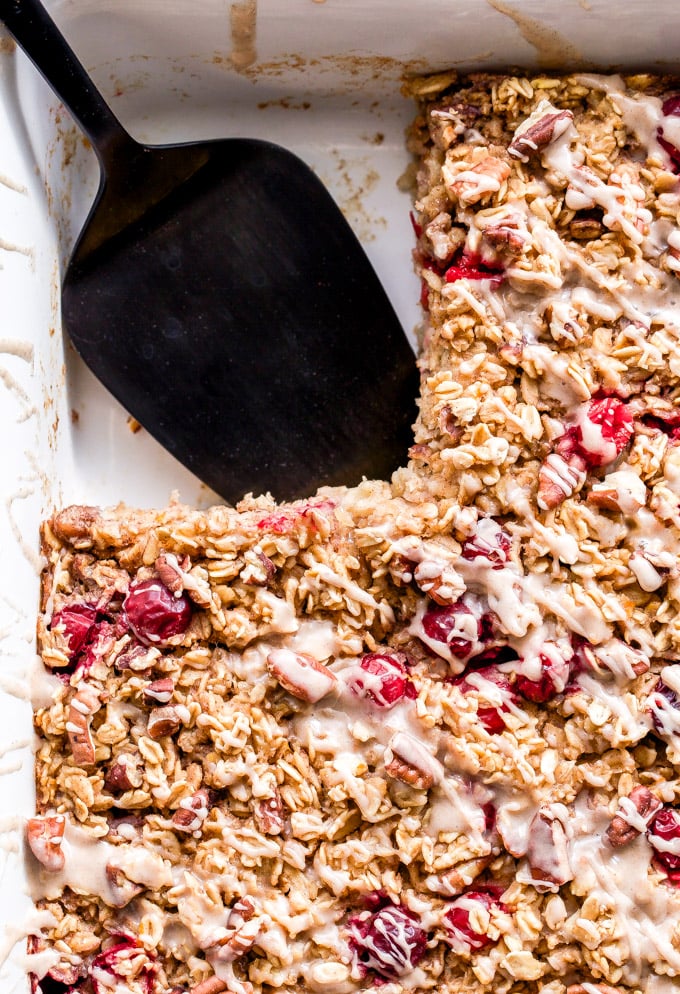 What you see in the photos for my recipes is not how it look on his plate. It’s usually haphazardly plopped on the plate, no garnishes, no styling and has to be reheated in the microwave. I can’t be bothered to make it look Instagram worthy for a second time. Poor guy, but hey, at least it still tastes good!

After my husband finished the baked oatmeal he came up from working in the basement and told me how good the cake was. Cake? Well, I guess that’s a good thing if I made oatmeal taste like cake! Honestly though, it tastes just like Christmas. By that I mean perfectly sweet from the maple syrup, studded with tons of tart cranberries, nutty toasted pecans and a hint of orange zest to brighten it all up. 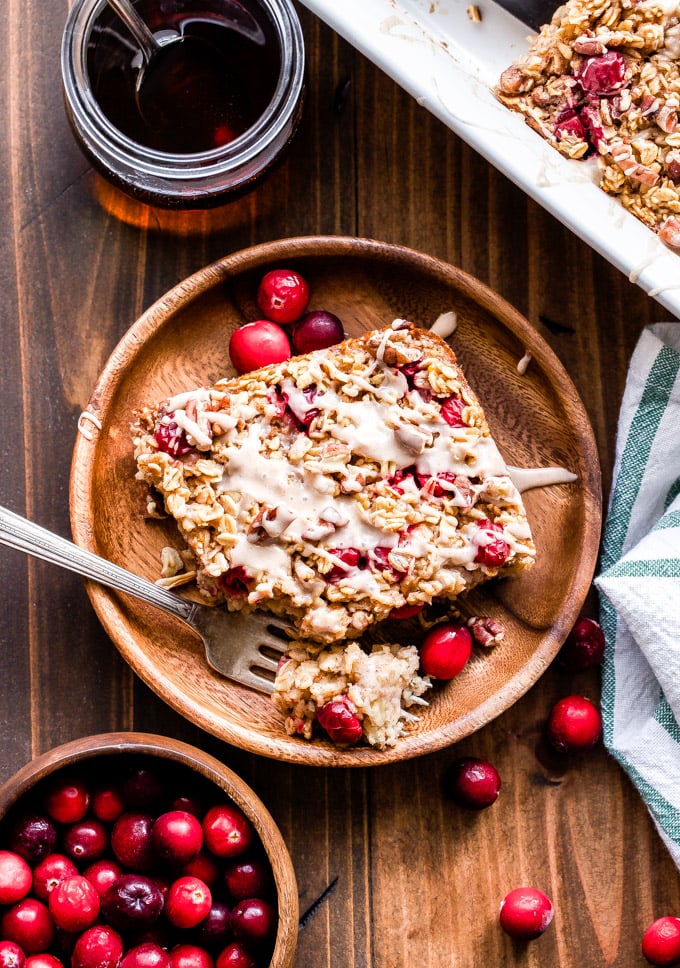 The cinnamon maple glaze is optional, but you’d be crazy not to add it on top. It’s so good you could eat it with a spoon and you better believe I did! This Cranberry Maple Pecan Baked Oatmeal is a must to go alongside your favorite egg dish and mimosa on Christmas morning. Enjoy! 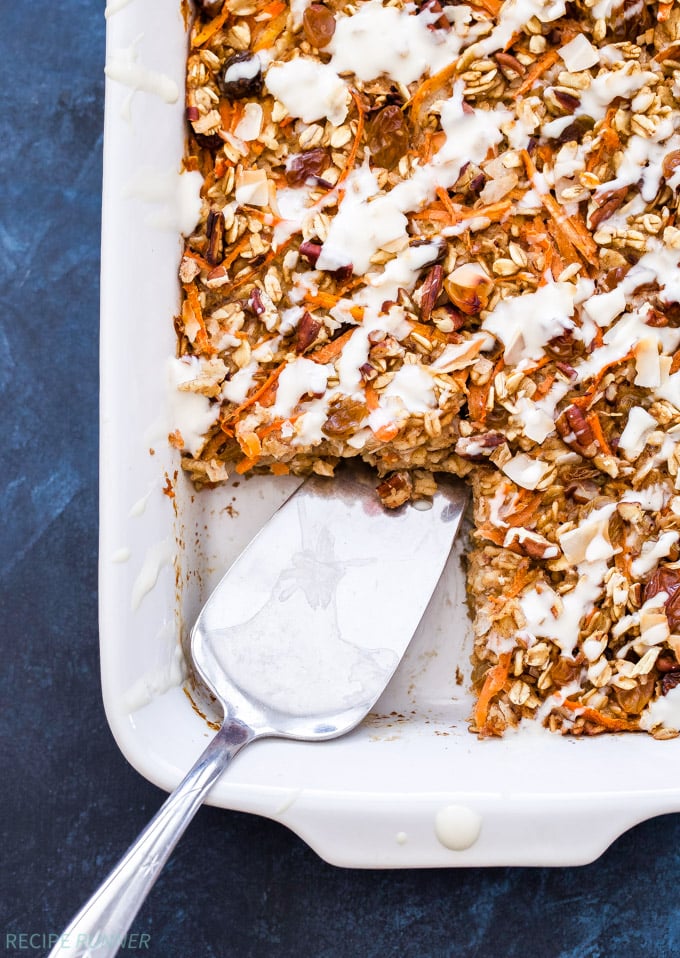 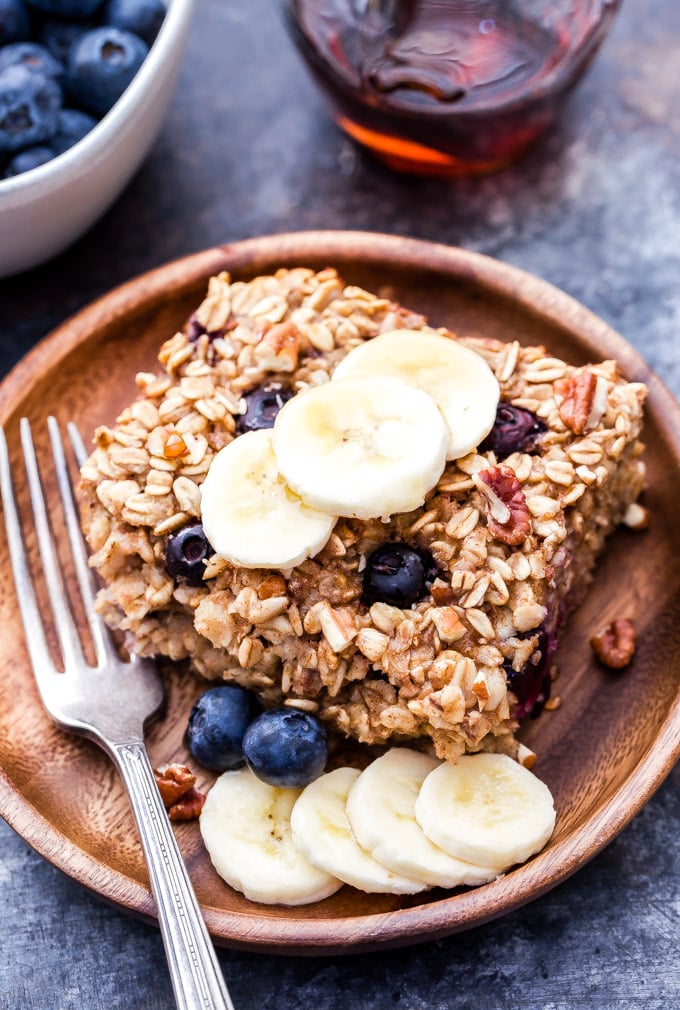 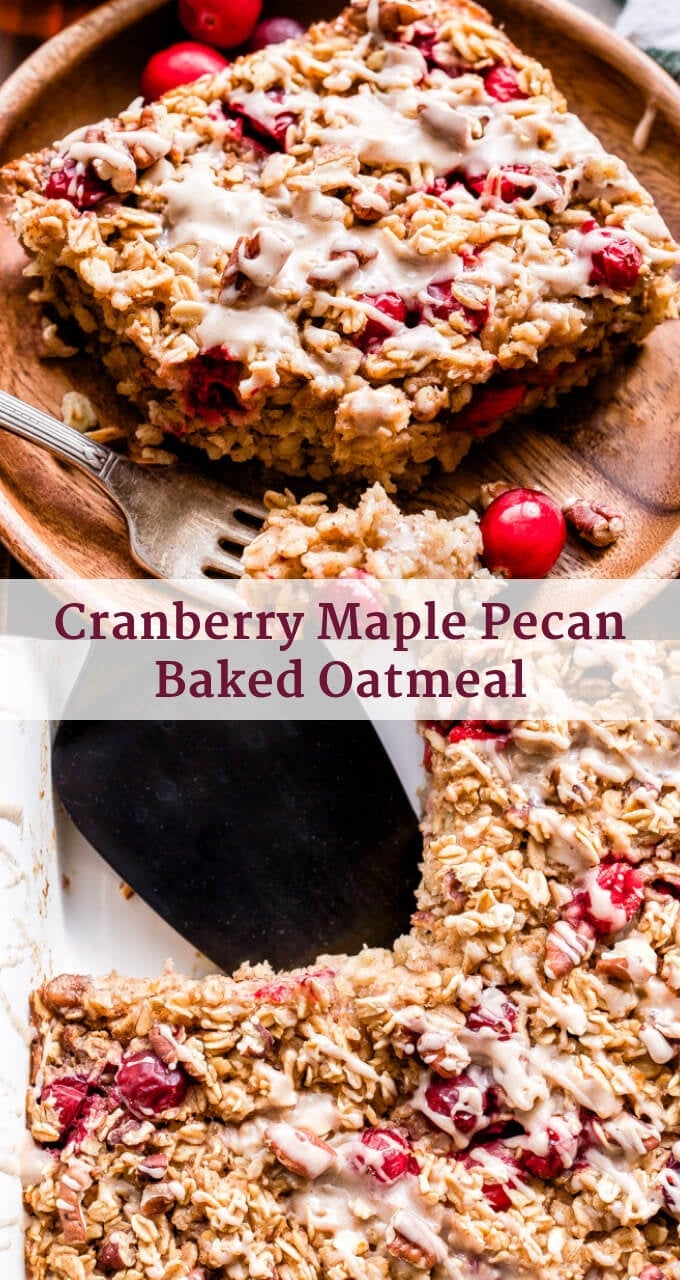 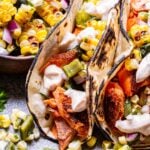 This website uses cookies to improve your experience while you navigate through the website. Out of these, the cookies that are categorized as necessary are stored on your browser as they are essential for the working of basic functionalities of the website. We also use third-party cookies that help us analyze and understand how you use this website. These cookies will be stored in your browser only with your consent. You also have the option to opt-out of these cookies. But opting out of some of these cookies may affect your browsing experience.
Necessary Always Enabled
Necessary cookies are absolutely essential for the website to function properly. These cookies ensure basic functionalities and security features of the website, anonymously.
Functional
Functional cookies help to perform certain functionalities like sharing the content of the website on social media platforms, collect feedbacks, and other third-party features.
Performance
Performance cookies are used to understand and analyze the key performance indexes of the website which helps in delivering a better user experience for the visitors.
Analytics
Analytical cookies are used to understand how visitors interact with the website. These cookies help provide information on metrics the number of visitors, bounce rate, traffic source, etc.
Advertisement
Advertisement cookies are used to provide visitors with relevant ads and marketing campaigns. These cookies track visitors across websites and collect information to provide customized ads.
Others
Other uncategorized cookies are those that are being analyzed and have not been classified into a category as yet.
SAVE & ACCEPT
Skip to Recipe