Goat Cheese Crostini with Cranberry Apple Compote is a sweet and savory bite that’s perfect for Thanksgiving and the holiday season! It’s easy to make and can be served as an appetizer or dessert. 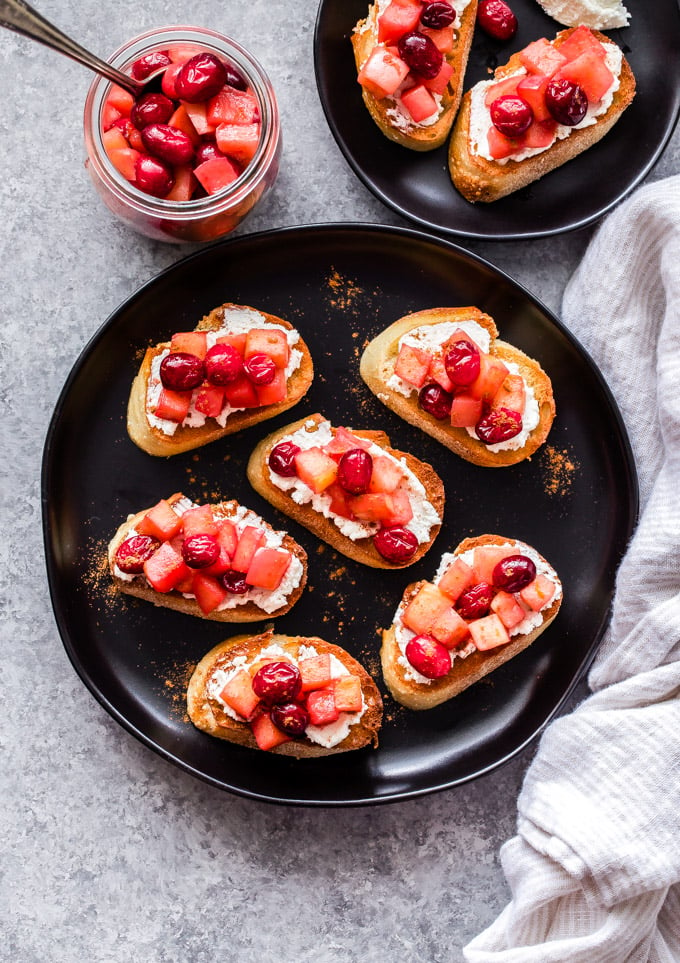 Does anyone else always wind up with a bag of cranberries from the prior year’s Thanksgiving or Christmas in their freezer? I always do! For some reason I think I’m going to need way more cranberries than I actually do.

A year may seem like a long time to have something in the freezer, but it never seems to affect cranberries. Fortunately, this year was no different than last and I actually had two bags in the freezer. It was a good thing since I haven’t seen any bags of fresh cranberries at the grocery store yet. 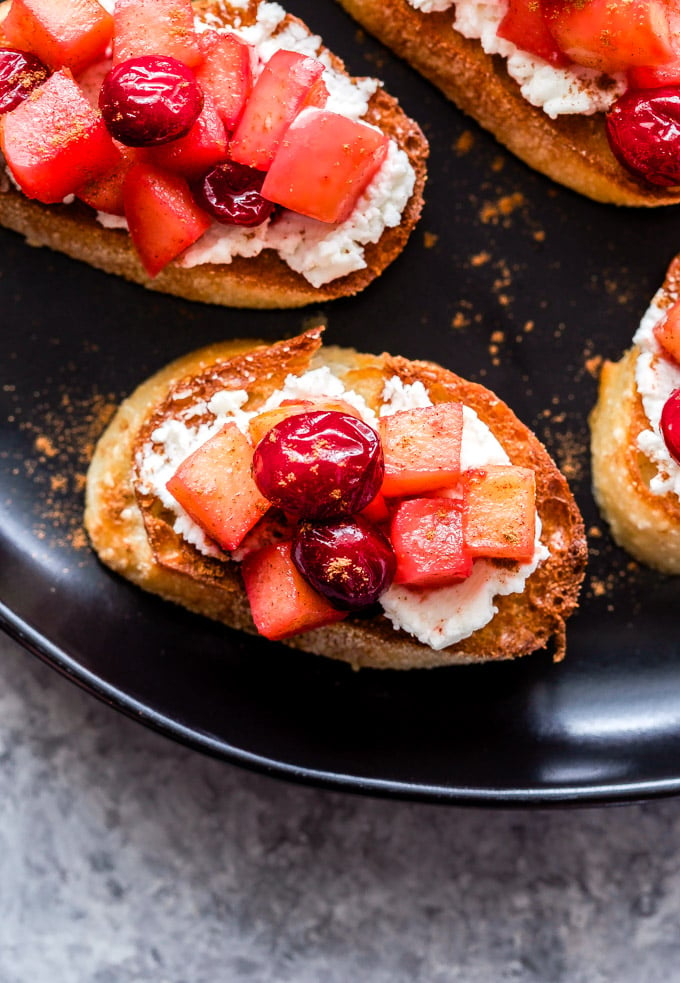 I wouldn’t be sharing the recipe for Goat Cheese Crostini with Cranberry Apple Compote if I hadn’t stashed those bags in the freezer and that would be a shame because they are one of the best crostini I’ve ever made!

You may have seen the word compote in the title and thought, “oh great, this sounds like a lot of work”, but that’s where you’re wrong. A compote is actually very simple to make and you can make it a day or two ahead of time. 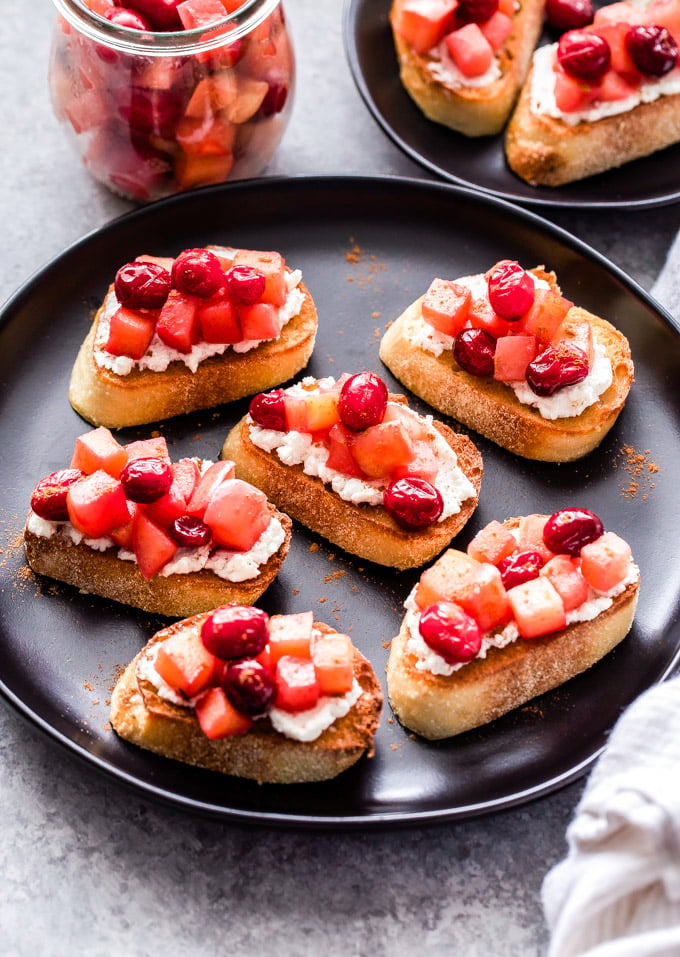 To make the cranberry apple compote all you need to do is melt a little butter in a non-stick skillet and add in the diced apples. Stir them around a bit until they start to soften, then add in the flavor. Cinnamon, orange zest and maple syrup add warmth and a hint of citrus to round everything out.

Again, stir everything together and cook it for another couple minutes. Then add in the cranberries and let it cook just until the cranberries start to pop. The whole process shouldn’t take more than 10 minutes and the result is topping for the crostini that tastes similar to cranberry apple pie filling, but not as sweet. 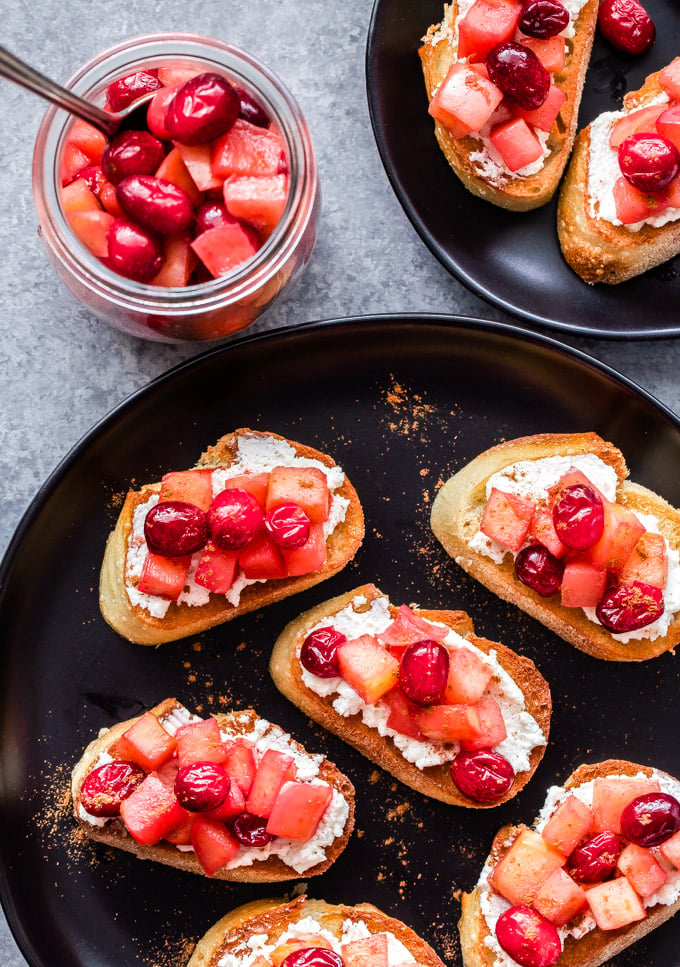 Goat Cheese Crostini with Cranberry Apple Compote are great for either an appetizer or light dessert. The goat cheese adds just the right amount of savory tangy flavor to make it an acceptable pre-dinner bite. Or if you’re a person who doesn’t care for dessert, you may find these appealing. Enjoy! 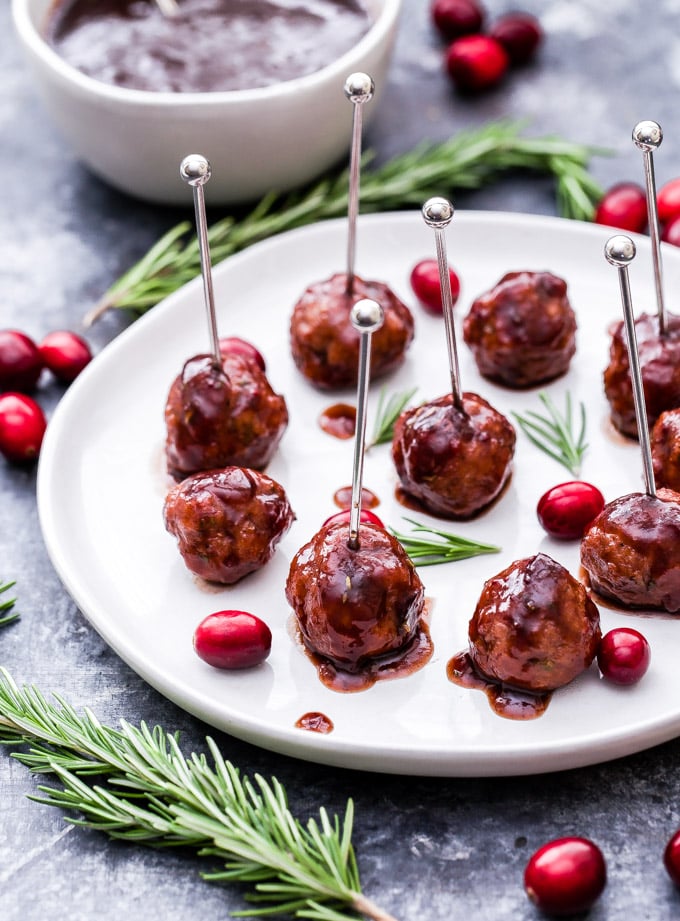 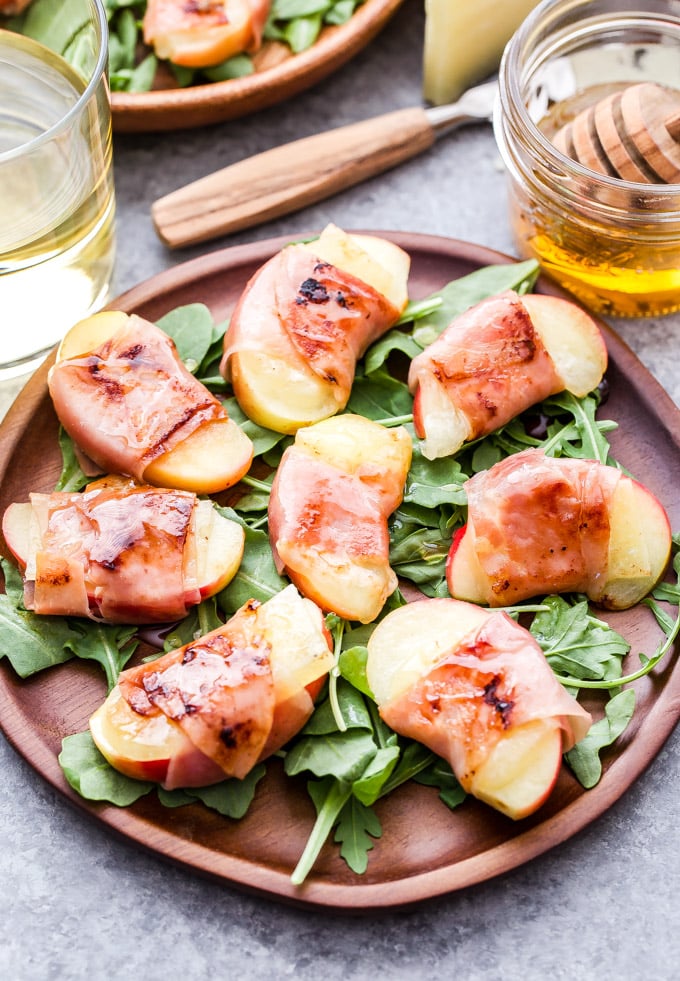 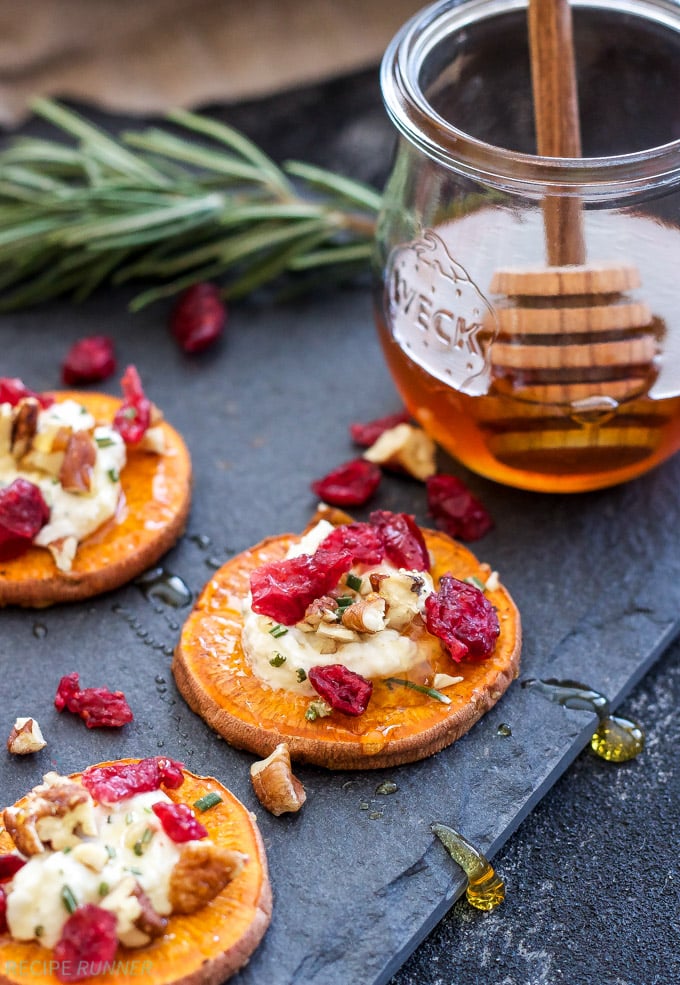 A firm apple that holds up well during cooking is best for this recipe. I recommend Honeycrisp or Pink Lady.

This website uses cookies to improve your experience while you navigate through the website. Out of these, the cookies that are categorized as necessary are stored on your browser as they are essential for the working of basic functionalities of the website. We also use third-party cookies that help us analyze and understand how you use this website. These cookies will be stored in your browser only with your consent. You also have the option to opt-out of these cookies. But opting out of some of these cookies may affect your browsing experience.
Necessary Always Enabled
Necessary cookies are absolutely essential for the website to function properly. These cookies ensure basic functionalities and security features of the website, anonymously.
Functional
Functional cookies help to perform certain functionalities like sharing the content of the website on social media platforms, collect feedbacks, and other third-party features.
Performance
Performance cookies are used to understand and analyze the key performance indexes of the website which helps in delivering a better user experience for the visitors.
Analytics
Analytical cookies are used to understand how visitors interact with the website. These cookies help provide information on metrics the number of visitors, bounce rate, traffic source, etc.
Advertisement
Advertisement cookies are used to provide visitors with relevant ads and marketing campaigns. These cookies track visitors across websites and collect information to provide customized ads.
Others
Other uncategorized cookies are those that are being analyzed and have not been classified into a category as yet.
SAVE & ACCEPT
Skip to Recipe
781 shares