Roasted Brussels Sprouts with Pears, Bacon and Cranberries will be your new favorite holiday side dish! Tons of savory, sweet flavor and it’s all made in one skillet! (Gluten-free and Paleo) 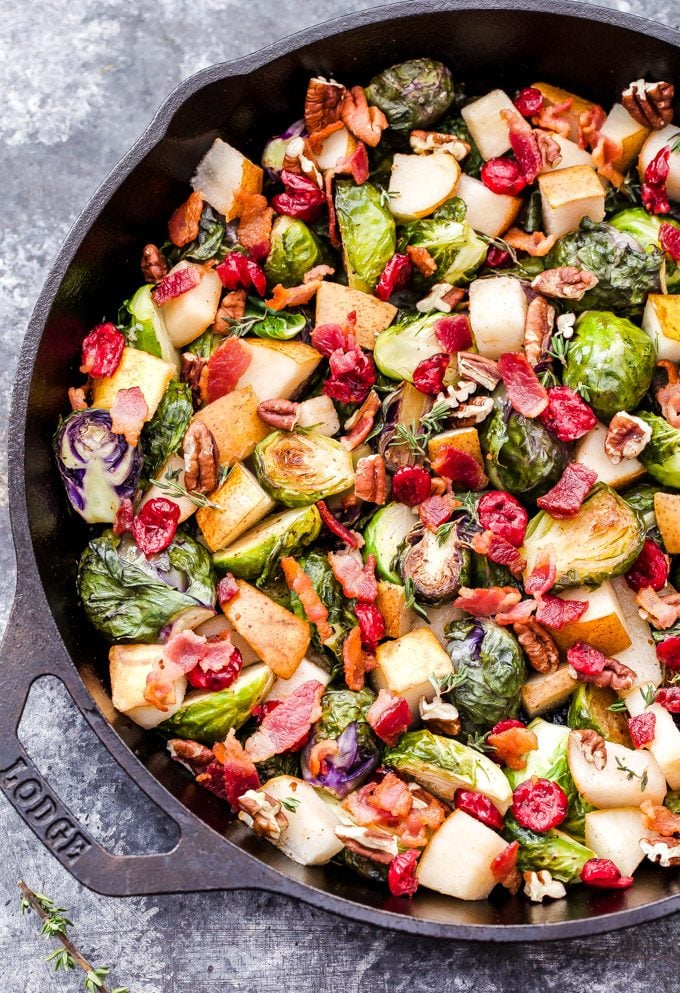 Thanksgiving is next Thursday, how did it sneak up so fast?! As of right now we don’t have anything planned. We’ll be staying here in Denver because as much as we’d like to travel back to Arizona and spend it with our families, it’s so darn expensive to fly during the holidays.

Last year I made a small Thanksgiving for two and even though I would have rather it been for 20, it was still nice. This year, whether we end up staying at home or going somewhere I plan on making these Roasted Brussels Sprouts with Pears, Bacon and Cranberries. 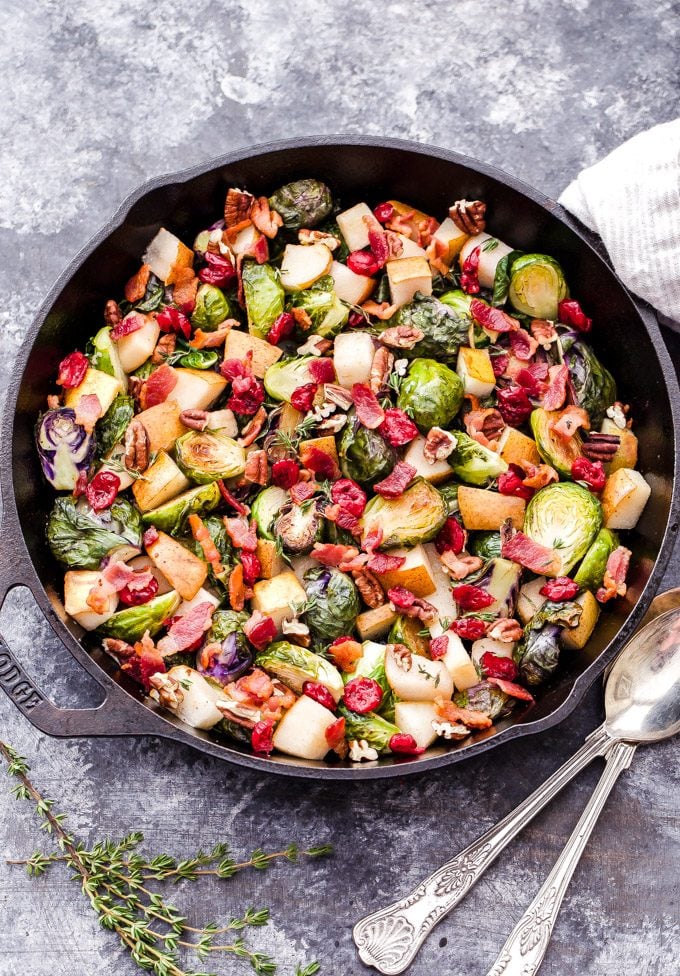 When it come to Brussels sprouts I think people either love or hate them. I’m on team love and my husband, well, he’ll choke down a couple, but I’d categorize him as team hate. Even with the bacon he still doesn’t like the little guys. Oh well, more for me!

I always laugh at how different our plates look when we sit down to eat Thanksgiving dinner. His is basically divided into thirds. Turkey, an embarrassingly huge mound of mashed potatoes drowning in gravy and rolls. It’s a very “white” plate of food. 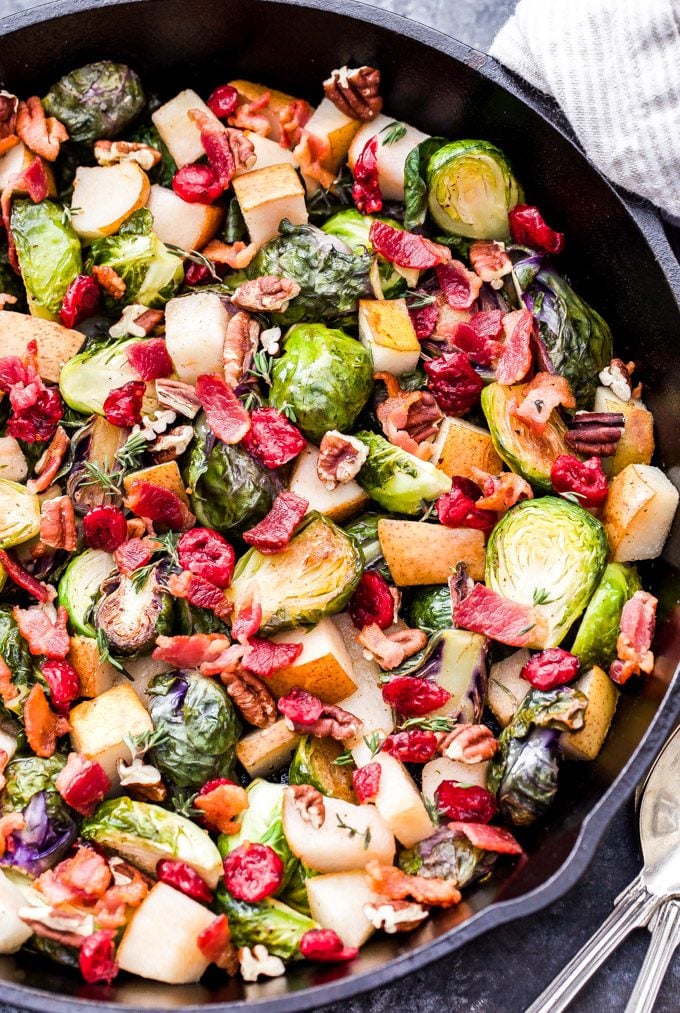 I on the other hand am all about the vegetable side dishes. Bring on those Brussels, roasted carrots, sweet potatoes, green beans, cranberry sauce and of course the turkey. I usually don’t bother with the rolls because I know I’ll have one the next day when I make an epic turkey sandwich with all the leftovers. I also skip the rolls and am modest with the potatoes because I’m saving up my calories and space in my stomach for ALL the pie! 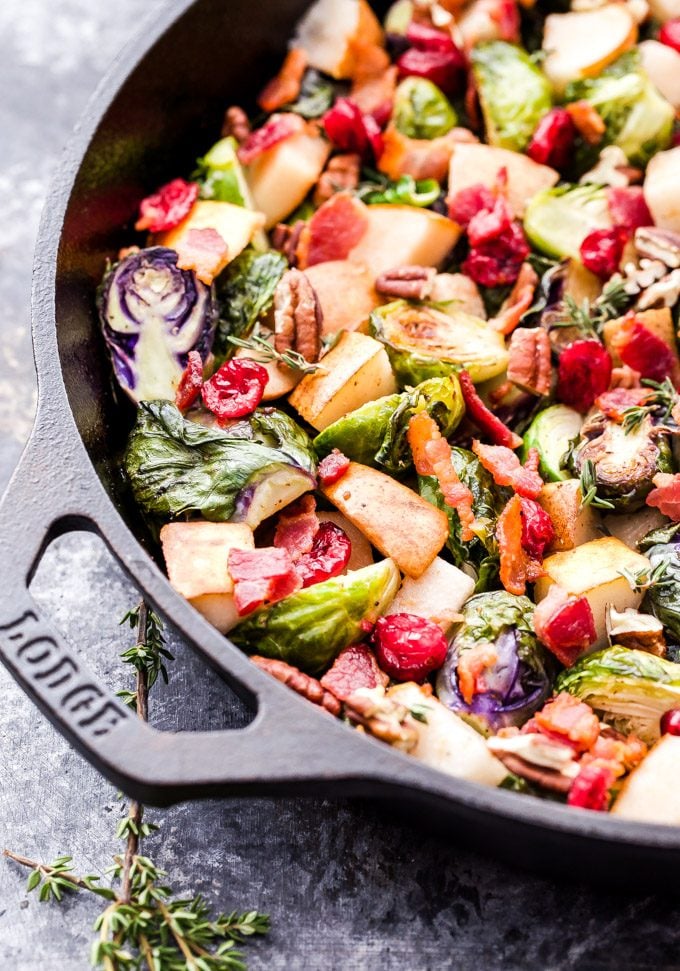 The great thing about these roasted Brussels sprouts is that they’re all made in one skillet. The bacon is cooked first and then some of the grease is saved so that you don’t have to add any extra oil when you roast the Brussels sprouts and pears. It also adds tons of extra flavor to the dish!

The pears are added in during the last few minutes of roasting so they don’t get mushy and then the bacon, dried cranberries and pecan all get added to the mix. It’s the perfect combination of savory, sweet, salty flavors with a little crunch for good measure! 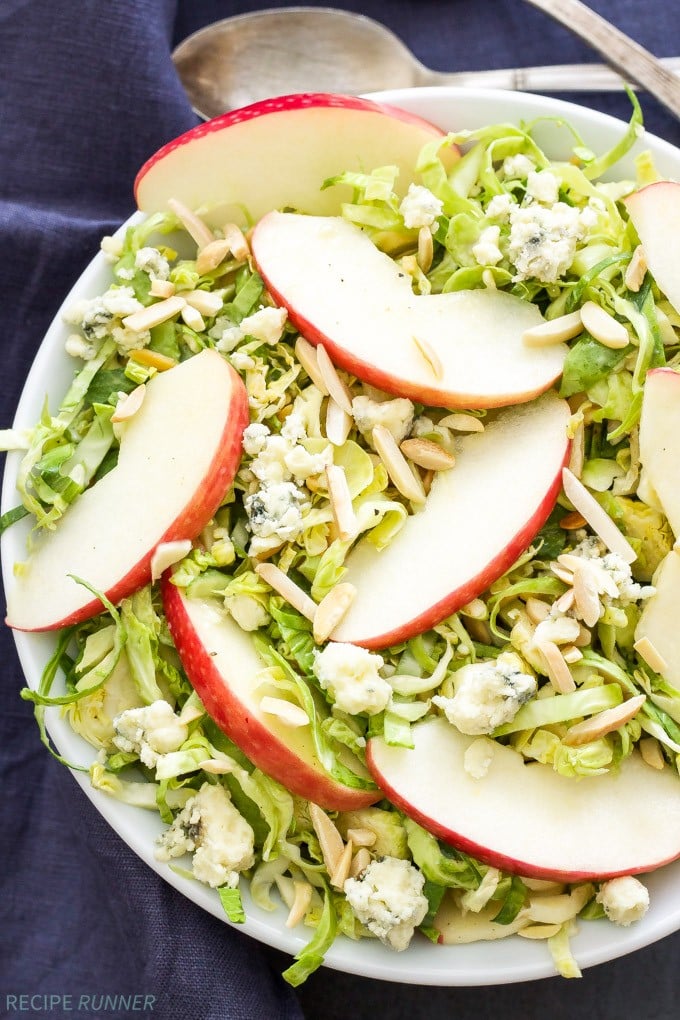 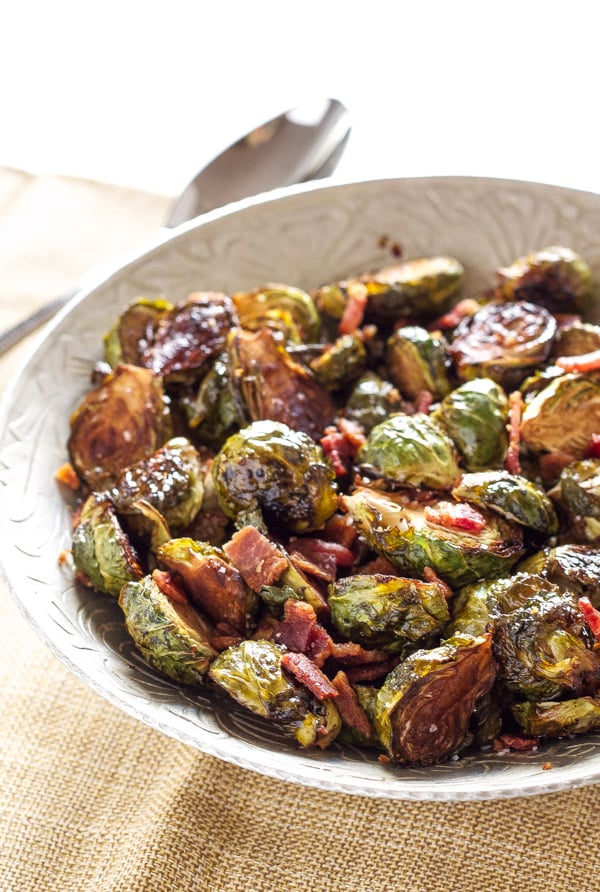 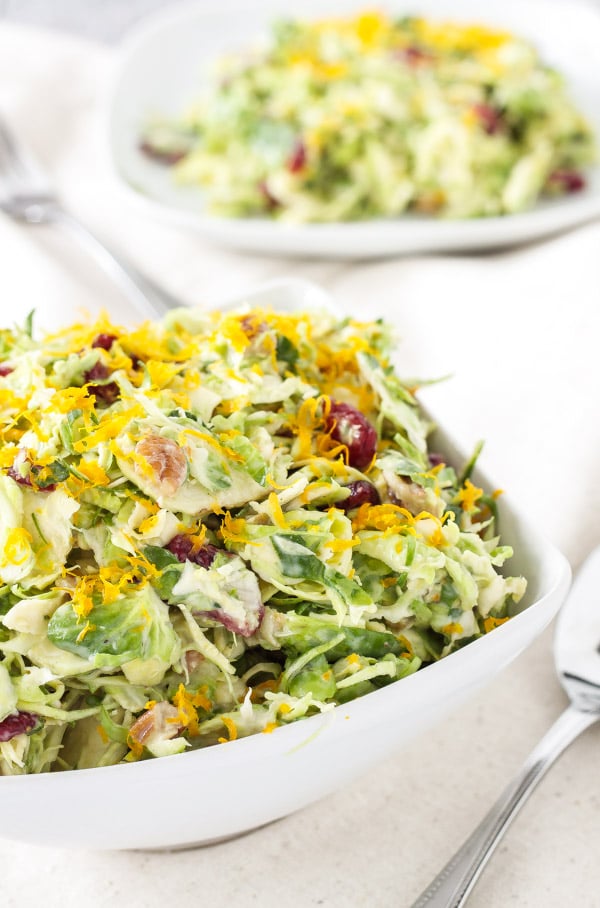 This website uses cookies to improve your experience while you navigate through the website. Out of these, the cookies that are categorized as necessary are stored on your browser as they are essential for the working of basic functionalities of the website. We also use third-party cookies that help us analyze and understand how you use this website. These cookies will be stored in your browser only with your consent. You also have the option to opt-out of these cookies. But opting out of some of these cookies may affect your browsing experience.
Necessary Always Enabled
Necessary cookies are absolutely essential for the website to function properly. These cookies ensure basic functionalities and security features of the website, anonymously.
Functional
Functional cookies help to perform certain functionalities like sharing the content of the website on social media platforms, collect feedbacks, and other third-party features.
Performance
Performance cookies are used to understand and analyze the key performance indexes of the website which helps in delivering a better user experience for the visitors.
Analytics
Analytical cookies are used to understand how visitors interact with the website. These cookies help provide information on metrics the number of visitors, bounce rate, traffic source, etc.
Advertisement
Advertisement cookies are used to provide visitors with relevant ads and marketing campaigns. These cookies track visitors across websites and collect information to provide customized ads.
Others
Other uncategorized cookies are those that are being analyzed and have not been classified into a category as yet.
SAVE & ACCEPT
Skip to Recipe
3877 shares