Balsamic Maple Roasted Brussels Sprouts with Bacon will be your new favorite way to eat them! The perfect blend of Sweet, savory and salty flavors. They’re sure to turn brussels sprouts haters into lovers!

It’s hard to believe that it’s already November and that Thanksgiving is only a few weeks away. If Thanksgiving is anything like Halloween was this year, then you’re likely already preparing for it. Even if you’re not quite ready to start planning your menu, these Balsamic Maple Roasted Brussels Sprouts with Bacon are a fantastic fall side dish!

It seems like people either love or hate brussels sprouts. If you’re one of those people who hates them, then you probably aren’t looking at this recipe. However, If you love them or are trying to find a way to make someone else love them, then you’re in the right place. These brussels sprouts are savory, sweet, salty and perfectly crispy!

How to Roast Brussels Sprouts So They’re Crispy

Why is Roasting the Best Method to Cook Brussels Sprouts?

Roasting removes the bitterness, which is the reason some people don’t like brussels sprouts. When roasted with olive oil, salt and pepper it gives caramelizes them and gives them a slight sweetness. It also makes the texture crisp unlike when they are boiled and have a mushy texture. 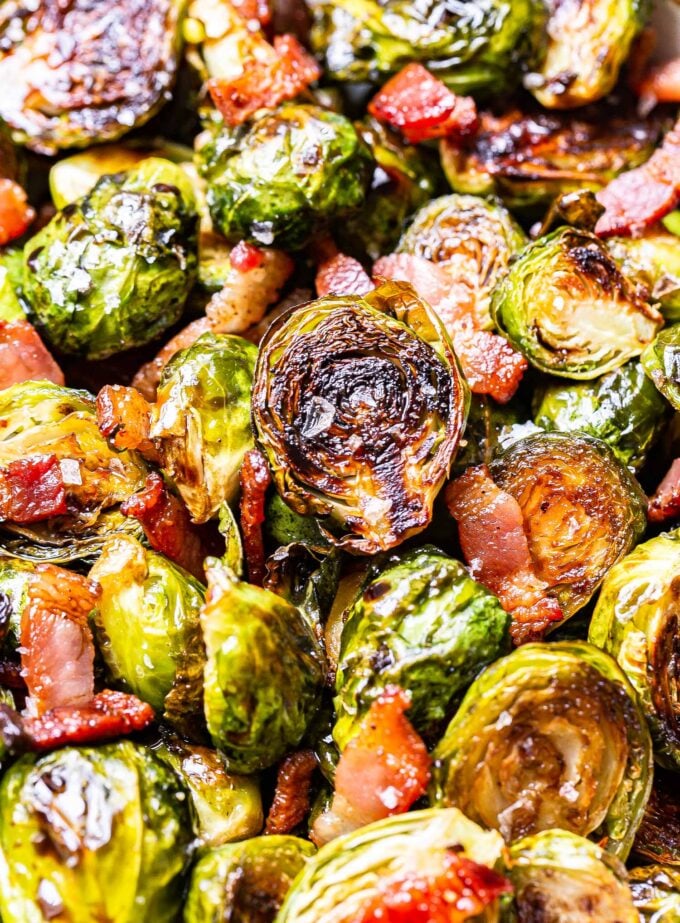 Can I make the brussels sprouts without bacon?

Absolutely. If you want to keep this dish vegetarian/vegan just skip using it. You’ll still end up with a great combination of salty and sweet flavors.

Can I make the brussels sprout ahead of time?

I don’t recommend making them ahead of time because they will lose their crispy texture, as will the bacon.

This website uses cookies to improve your experience while you navigate through the website. Out of these, the cookies that are categorized as necessary are stored on your browser as they are essential for the working of basic functionalities of the website. We also use third-party cookies that help us analyze and understand how you use this website. These cookies will be stored in your browser only with your consent. You also have the option to opt-out of these cookies. But opting out of some of these cookies may affect your browsing experience.
Necessary Always Enabled
Necessary cookies are absolutely essential for the website to function properly. These cookies ensure basic functionalities and security features of the website, anonymously.
Functional
Functional cookies help to perform certain functionalities like sharing the content of the website on social media platforms, collect feedbacks, and other third-party features.
Performance
Performance cookies are used to understand and analyze the key performance indexes of the website which helps in delivering a better user experience for the visitors.
Analytics
Analytical cookies are used to understand how visitors interact with the website. These cookies help provide information on metrics the number of visitors, bounce rate, traffic source, etc.
Advertisement
Advertisement cookies are used to provide visitors with relevant ads and marketing campaigns. These cookies track visitors across websites and collect information to provide customized ads.
Others
Other uncategorized cookies are those that are being analyzed and have not been classified into a category as yet.
SAVE & ACCEPT
Skip to Recipe
64624 shares