So the no baking only lasted about a week and then I found myself in the kitchen baking a batch of these Rhubarb Pecan Muffins. 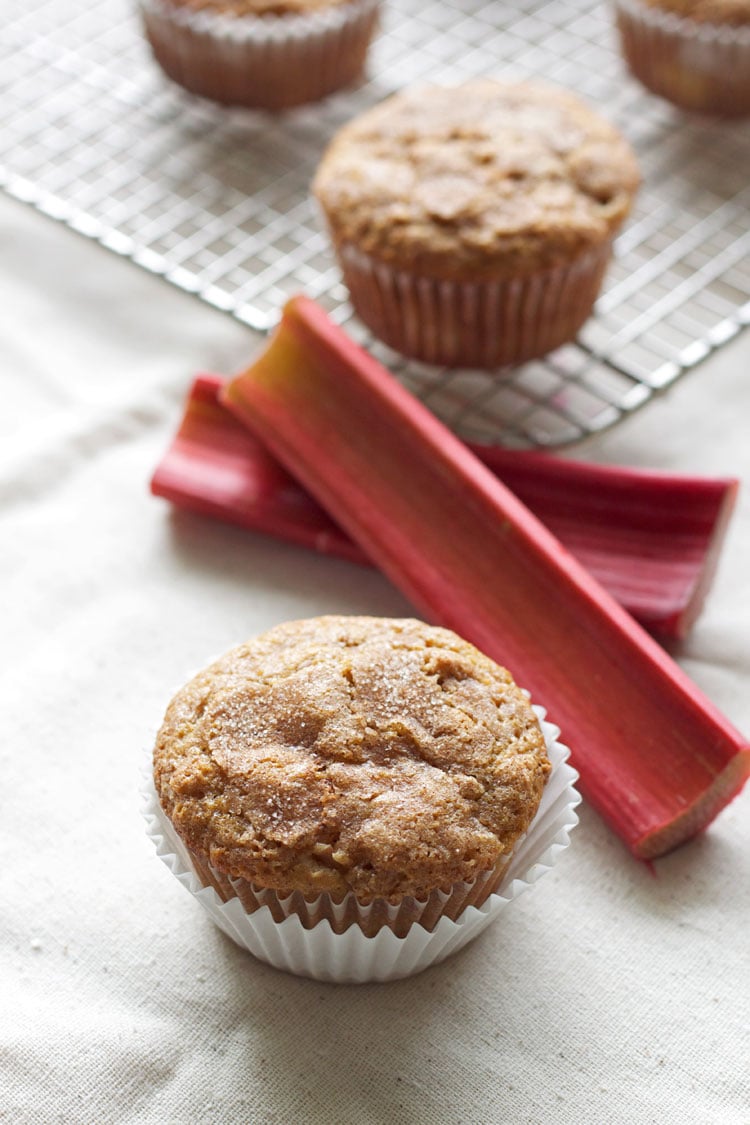 To be honest this was maybe my second time cooking or baking with rhubarb. I’m not really sure why I don’t more often, probably because it’s only in season for a short time. However, when I was at the grocery store over the weekend I spotted some beautiful bright red rhubarb sitting next to the celery. I grabbed a couple stalks without a clue what I was going to do with them. When I got home I started rummaging through a box of recipes that I had found at my Grandma’s house. 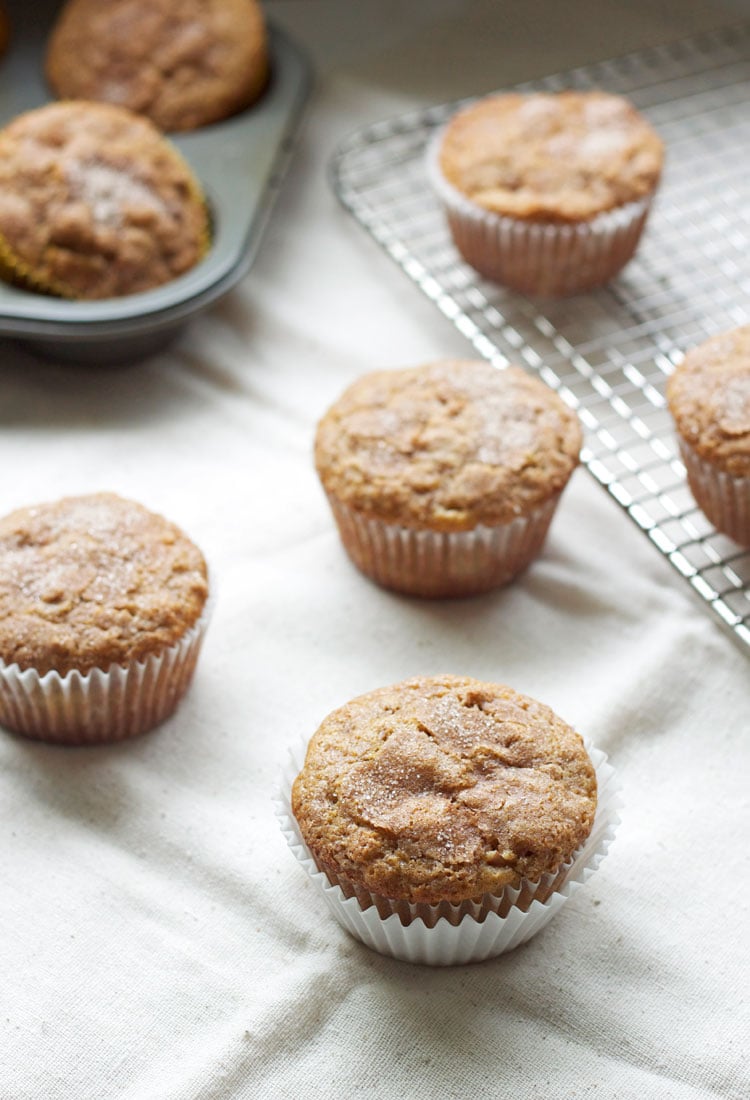 About a month ago I went up to her house with my Dad while he was in town and had the opportunity to go through any of her things that were still there and take what I wanted before the house went up for sale. She is 92 years old and moved into assisted living last fall, I really hope I’m doing as well as she is when I’m that age!

When we got to her house it brought back so many memories of helping her bake pies in the kitchen, playing out in the playhouse in the backyard with my sister (I can’t believe it’s still there), swinging from the monkey bars that are still standing out next to the lake, and playing board games for hours on the living room floor. As I walked through the house it was a little sad knowing that soon I would never be able to go to her house again.

Initially I wasn’t sure if I was going to find anything that I wanted or could use, but then I started opening the cupboards in the kitchen…it was a gold mine! I found tons of baking pans, pie plates, muffin tins, old vintage looking spoons and bowls that I could use for photographing, glasses, silverware, cookbooks, and my absolute favorite find, her box of handwritten recipes. The recipes were written out on recipe cards or scraps of paper and filed by category in an old shoe box. I was so excited I started jumping up and down, who knew recipes could make a girl so happy!

When I got home I immediately started going through the box of recipes. I was incredibly happy when I found her pie recipes in the box. She used to own her own pie shop and my sister and I would come up in the summer and help her make pies and turnovers. I’ve often thought how much I would love to have the recipes and now I do! So, back to last weekend. While sifting through the box of recipes I found one for rhubarb walnut muffins. The recipe looked basic enough and I was now in possession of rhubarb, so I thought I would give these muffins a try. 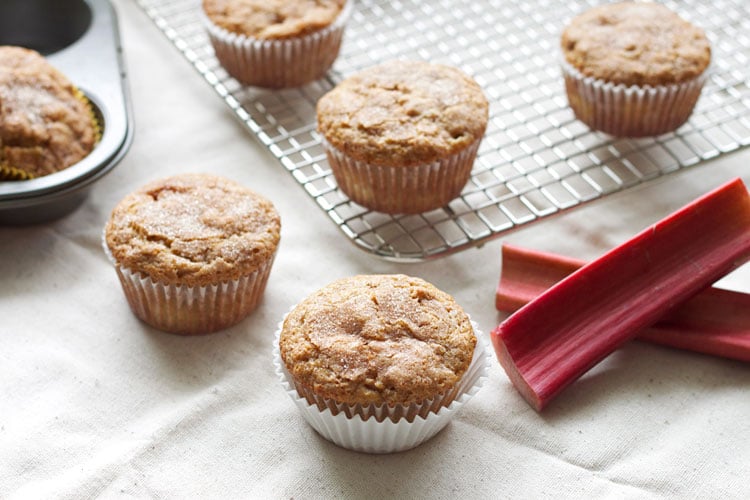 I only made a couple of changes to the recipe first being the walnuts. I didn’t have any but I did have pecans and figured they would taste just as good. I also cut back the butter a little and replaced it with Greek yogurt, cut out a couple tablespoons of sugar, replaced some of the all purpose flour with whole wheat pastry flour, and added cinnamon to the batter. I was a little concerned what the flavor of these would taste like since rhubarb was being used alone without any berries to sweeten it up.

I was pleasantly surprised by how delicious they turned out. The muffin batter was slightly sweet and had hints of molasses flavor because it uses all brown sugar. This helped offset the tart flavor of the rhubarb. The toasted pecans gave the muffin a nice nutty and crunchy texture, as did the cinnamon sugar topping.

The muffins were very moist thanks to the buttermilk and Greek yogurt, the combo of these two never lets me down when I’m baking. The Rhubarb Pecan Muffins were a nice alternative to the usual strawberry rhubarb combination and I’ll definitely be making them again! My favorite part though about the muffins was knowing that I had made something that came from my Grandma’s recipe collection, because as we all know those recipes are the best! 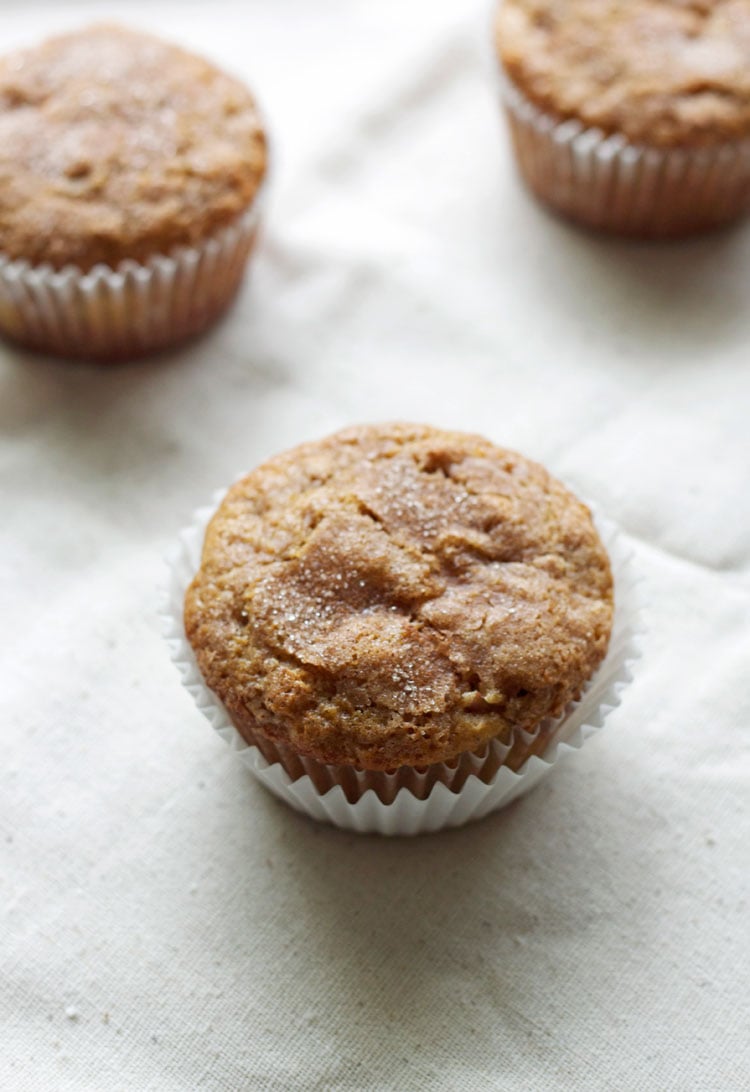 Muffins may be stored in an airtight container for a couple days or wrapped individually and placed in a freezer bag and frozen until ready for use.

This website uses cookies to improve your experience while you navigate through the website. Out of these, the cookies that are categorized as necessary are stored on your browser as they are essential for the working of basic functionalities of the website. We also use third-party cookies that help us analyze and understand how you use this website. These cookies will be stored in your browser only with your consent. You also have the option to opt-out of these cookies. But opting out of some of these cookies may affect your browsing experience.
Necessary Always Enabled
Necessary cookies are absolutely essential for the website to function properly. These cookies ensure basic functionalities and security features of the website, anonymously.
Functional
Functional cookies help to perform certain functionalities like sharing the content of the website on social media platforms, collect feedbacks, and other third-party features.
Performance
Performance cookies are used to understand and analyze the key performance indexes of the website which helps in delivering a better user experience for the visitors.
Analytics
Analytical cookies are used to understand how visitors interact with the website. These cookies help provide information on metrics the number of visitors, bounce rate, traffic source, etc.
Advertisement
Advertisement cookies are used to provide visitors with relevant ads and marketing campaigns. These cookies track visitors across websites and collect information to provide customized ads.
Others
Other uncategorized cookies are those that are being analyzed and have not been classified into a category as yet.
SAVE & ACCEPT
Skip to Recipe
621 shares