This Spiced Rum Chai Latte is the most delicious and cozy cocktail for a cold night. Enjoy one next to the fire or make a big batch to serve at your holiday party this year! 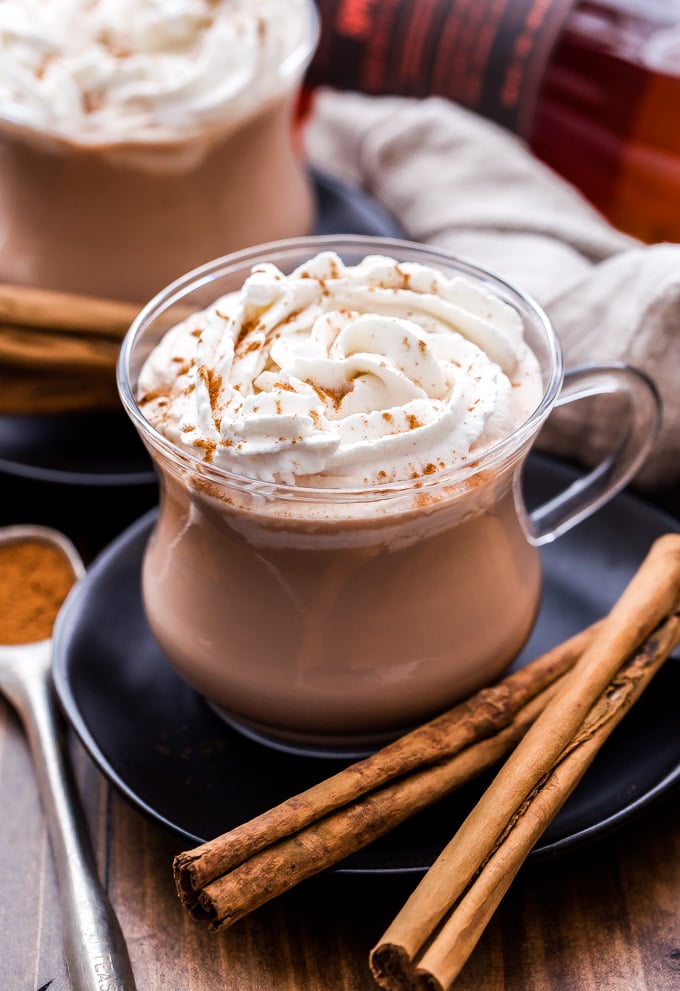 A couple weeks ago, for my husband’s birthday I took him out for dinner to one of his favorite restaurants, Linger and also to a new-to-us distillery in Denver. It seems to be a tradition that on his birthday we go visit a new distillery, although somehow we ended up at one in Vail on my birthday.

I actually really like doing the tours because I love to learn the process of how different types of alcohol are made. There’s a definite process, craft and passion behind the work that these men and women do and it’s something I can appreciate.

Another perk of the tours is that they often include a tasting afterwards. With this last tour we did at Bear Creek Distillery, we were actually able to choose four different alcohols to try since they don’t just specialize in one. My husband of course went straight for the whiskeys and bourbon, but I decided to be a little more adventurous and sampled a vodka, bourbon, whiskey and spiced rum. 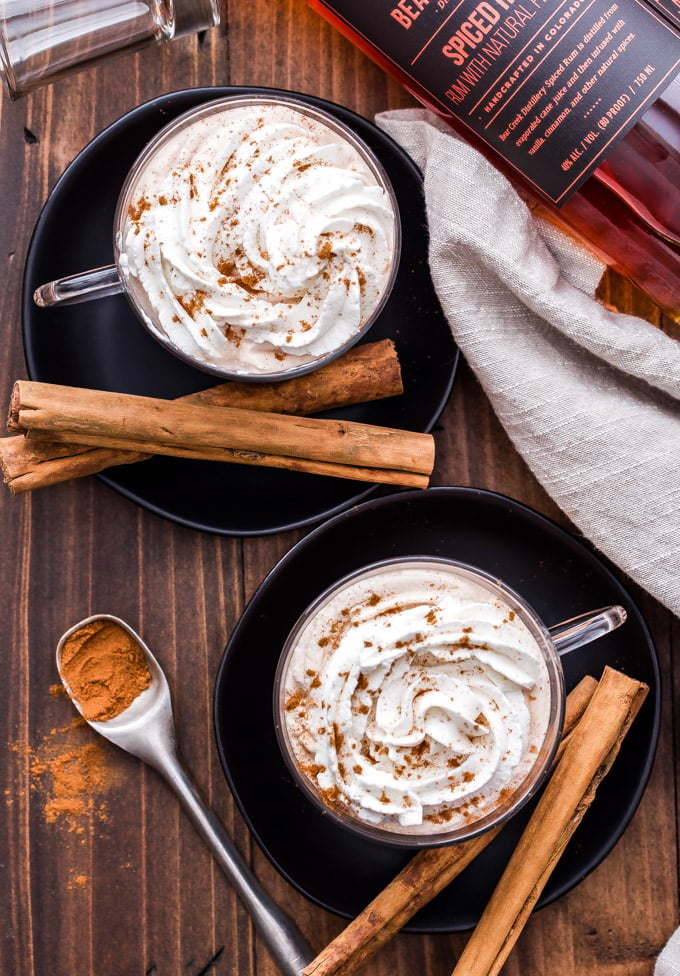 Rum isn’t something I normally pick to drink. It kind of lost it’s appeal after having too many Malibu Rum mixed with soda concoctions. Was that anyone else’s drink of choice in their early 20’s? These days the thought of a drink that sweet makes my stomach turn.

However, something about the spiced rum sounded so appealing on that cool fall day and I couldn’t resist giving it a try. It was absolutely delicious! I told my husband this was the first alcohol I’d had where I could just sip it as is, no need to mix it with anything. 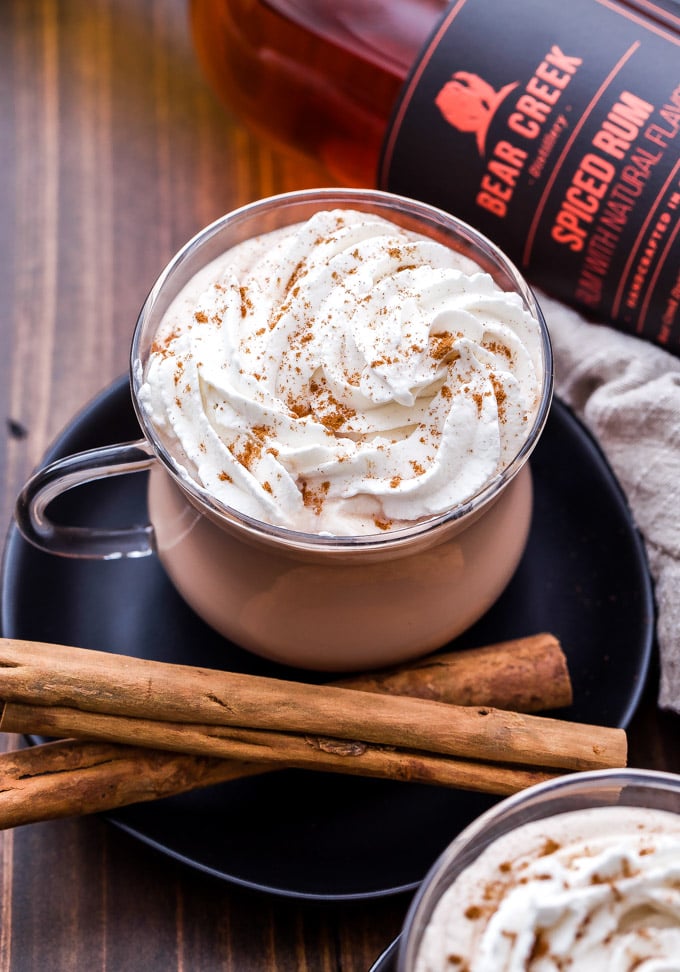 Of course being a food blogger, I can’t leave well enough alone and knew I had to create a cocktail recipe using it to share with all of you. I was inspired by the enormous menu of cocktails they had at the distillery’s bar, but one in particular caught my eye.

It was an iced drink using chai, half and half and the spiced rum. I loved it’s simplicity, not to mention the combination of chai with the spiced rum sounded heavenly. Since it’s fall and soon to be winter, I decided I wanted to make a hot version. 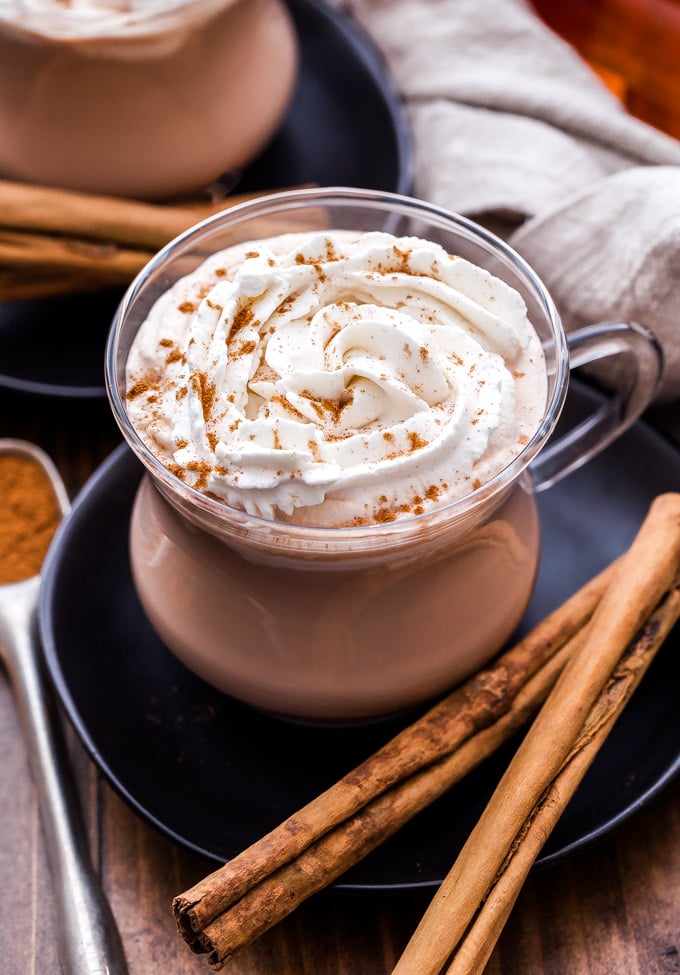 I stuck with using chai concentrate to keep things easy and then combined it with 2% milk. You can of course use any milk you’d like, even almond milk if you need to keep it dairy free. The milk and chai are heated together on the stove until they come to a simmer and then all that’s left to do is divide it into mugs, pour in the spiced rum and top it with whipped cream.

It’s one of the easiest, most delicious cold weather cocktails I’ve ever made and would also be great to double or triple for a party. I’m looking forward to making it many times in the months ahead! 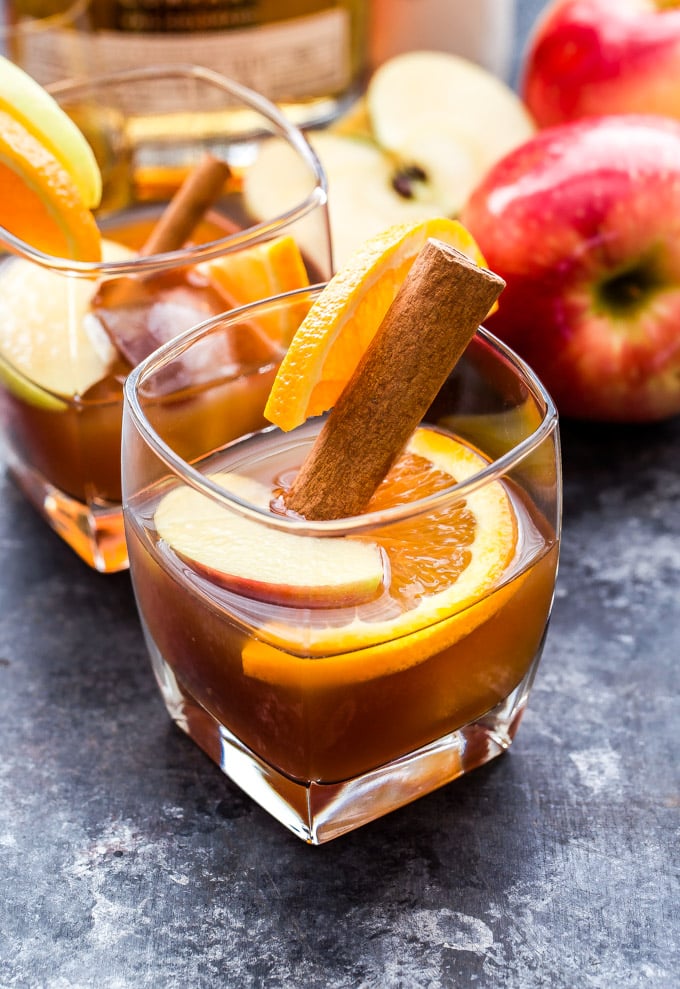 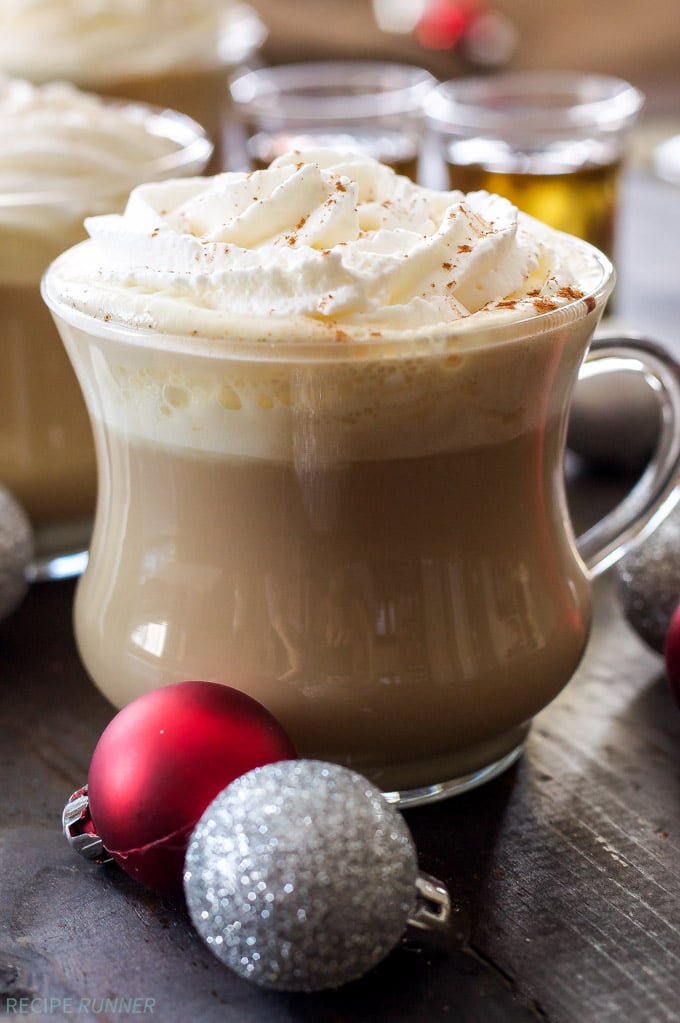 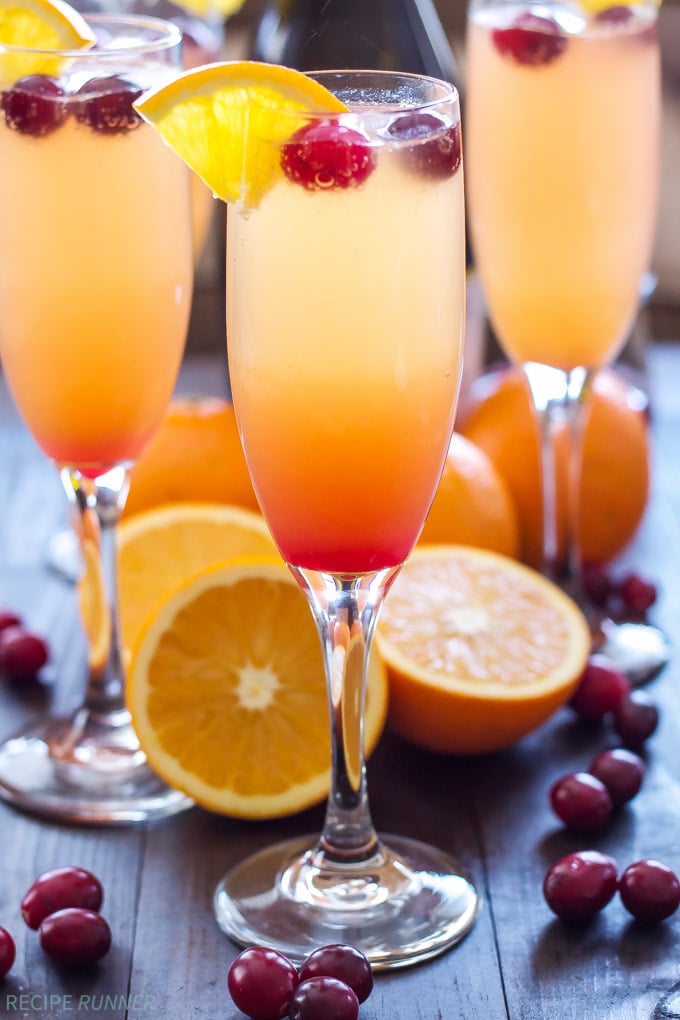 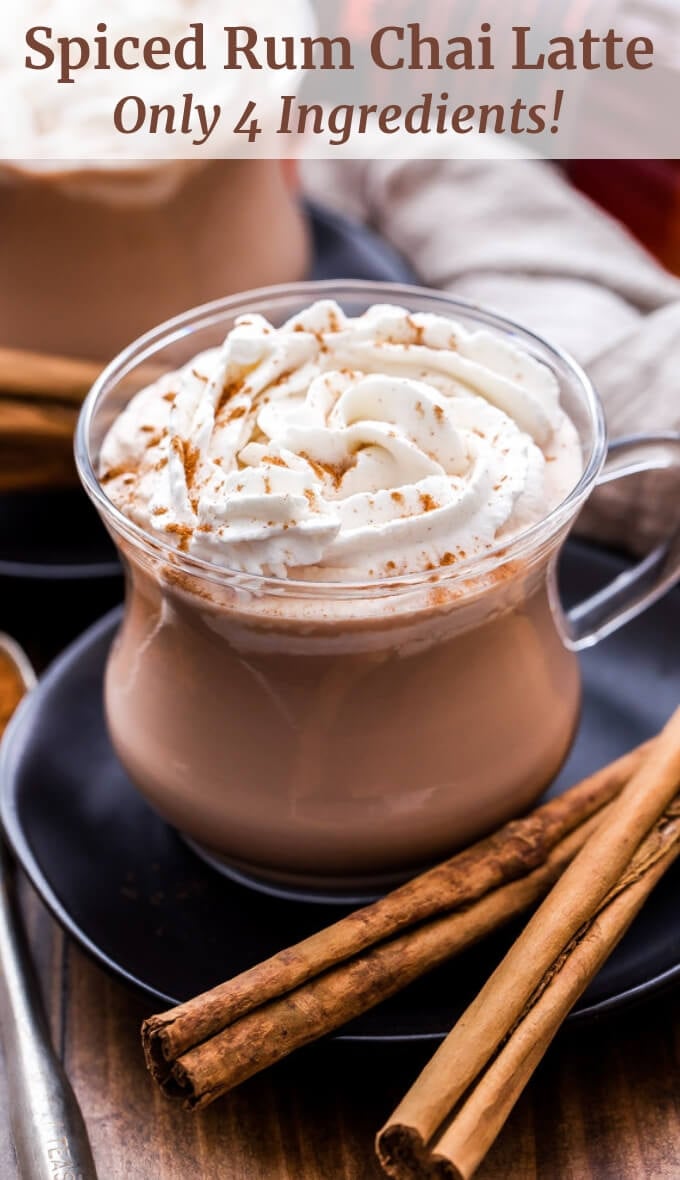 This website uses cookies to improve your experience while you navigate through the website. Out of these, the cookies that are categorized as necessary are stored on your browser as they are essential for the working of basic functionalities of the website. We also use third-party cookies that help us analyze and understand how you use this website. These cookies will be stored in your browser only with your consent. You also have the option to opt-out of these cookies. But opting out of some of these cookies may affect your browsing experience.
Necessary Always Enabled
Necessary cookies are absolutely essential for the website to function properly. These cookies ensure basic functionalities and security features of the website, anonymously.
Functional
Functional cookies help to perform certain functionalities like sharing the content of the website on social media platforms, collect feedbacks, and other third-party features.
Performance
Performance cookies are used to understand and analyze the key performance indexes of the website which helps in delivering a better user experience for the visitors.
Analytics
Analytical cookies are used to understand how visitors interact with the website. These cookies help provide information on metrics the number of visitors, bounce rate, traffic source, etc.
Advertisement
Advertisement cookies are used to provide visitors with relevant ads and marketing campaigns. These cookies track visitors across websites and collect information to provide customized ads.
Others
Other uncategorized cookies are those that are being analyzed and have not been classified into a category as yet.
SAVE & ACCEPT
Skip to Recipe
3387 shares