Greek Pita Pizzas are a fun and healthy way to do pizza night! Mini pitas topped with hummus, a simple Greek salad and feta cheese are perfect when you’re craving a fresh pizza full of Mediterranean flavors. 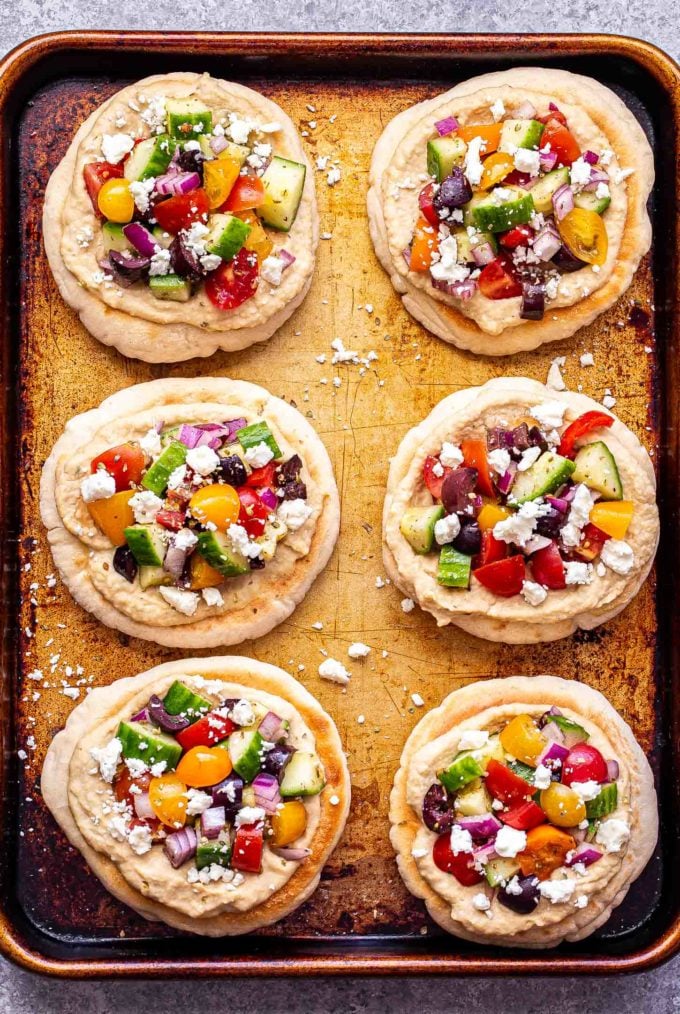 Pizza doesn’t have to be heavy or something you only treat yourself to on the weekend. In fact, it can be pretty darn healthy. These Greek Pita Pizzas have become a new favorite of ours for pizza night when we’re craving something a little lighter and fresher.

What Do I Need to Make the Pizzas? 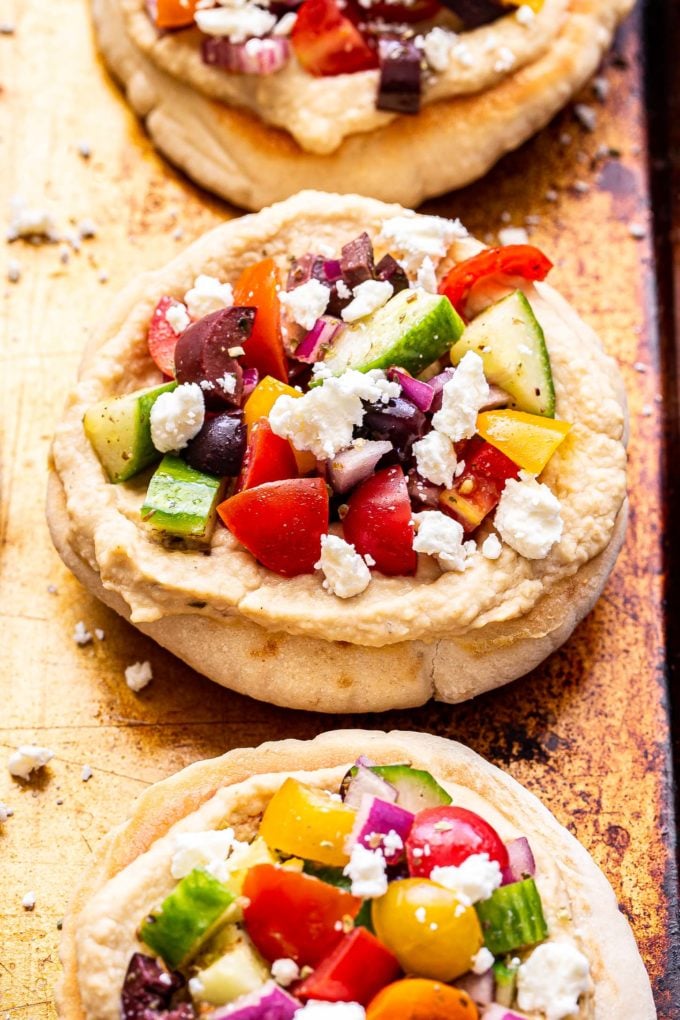 How to Make Greek Pita Pizzas

Making these pita pizzas is even easier than making traditional pizza. There’s no dough to roll out and no cheese to grate, making them a quick and easy option for weeknights.

I generally use traditional hummus when I make these pizzas and often buy prepared hummus at the grocery store. There’s a lot of great options for prepared hummus these days. However, if you want to make homemade hummus and/or use a flavored version feel free to do so. Roasted Red Pepper Hummus or Roasted Garlic Hummus would be delicious alternatives. 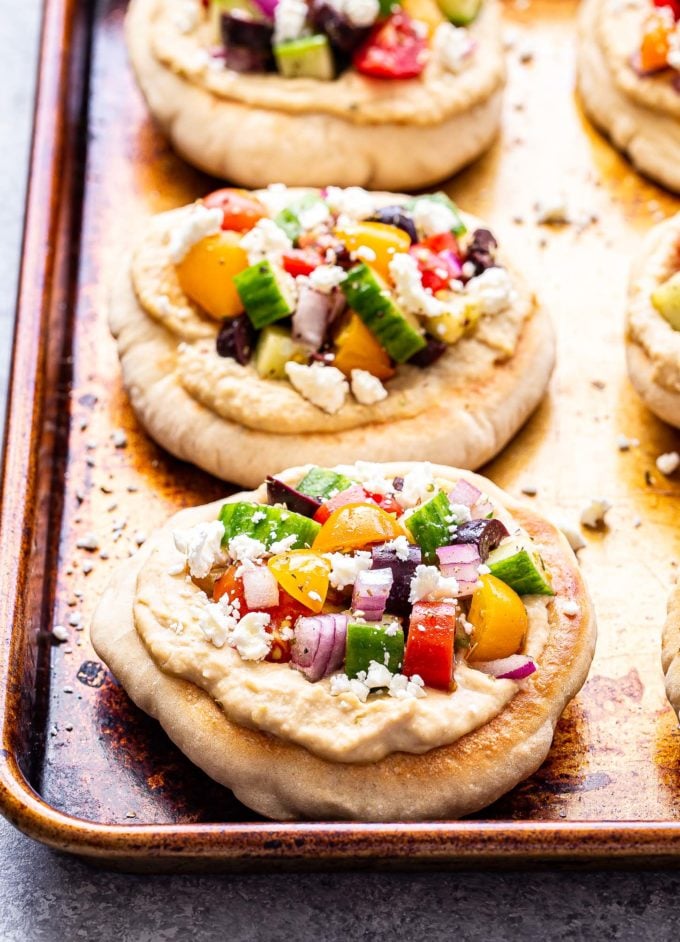 What Can I Use Instead of Hummus?

If you don’t like hummus or don’t eat beans try spreading on Grilled Baba Ganoush, Tzatziki Sauce, or Whipped Feta. 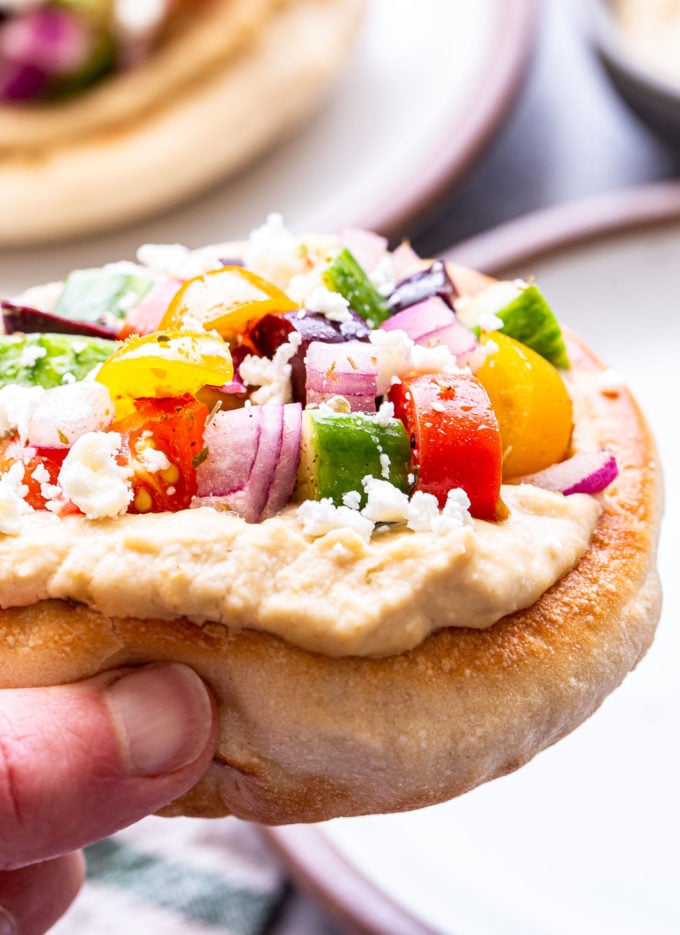 Can I Use Regular Sized Pita Bread?

Yes. If you can’t find the mini pita bread you can absolutely use the regular size. The recipe makes six pita pizzas when you use the mini size. If you’re using the regular size pita you should be able to make three. 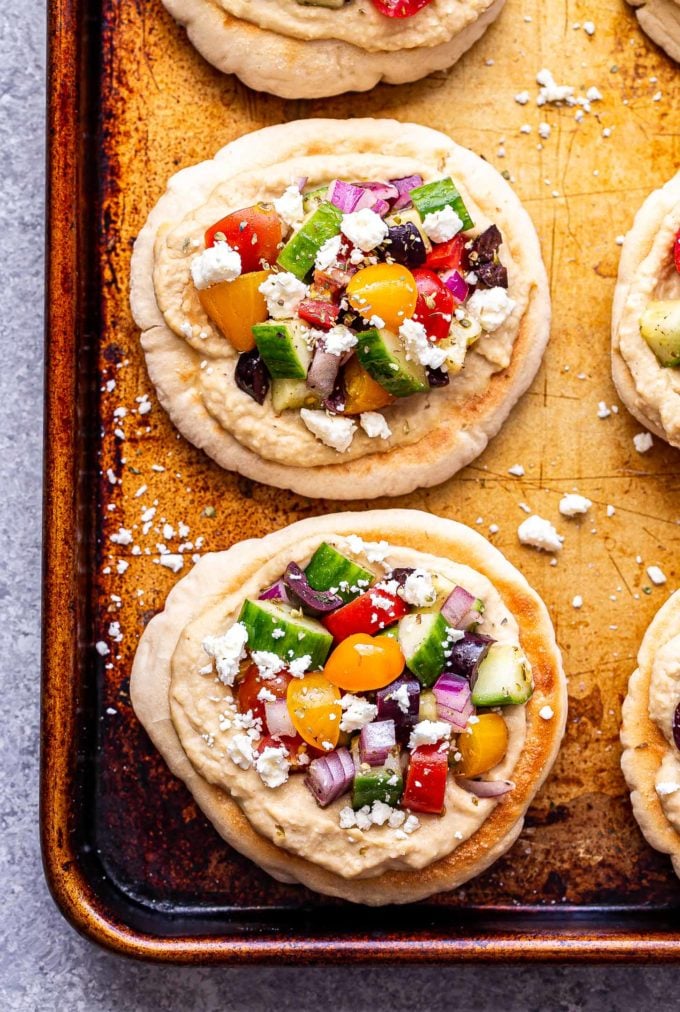 These Greek Pita Pizzas are perfect for a vegetarian dinner, lunch or even a party appetizer. If you meal prep you can also make the salad ahead of time and assemble them throughout the week. 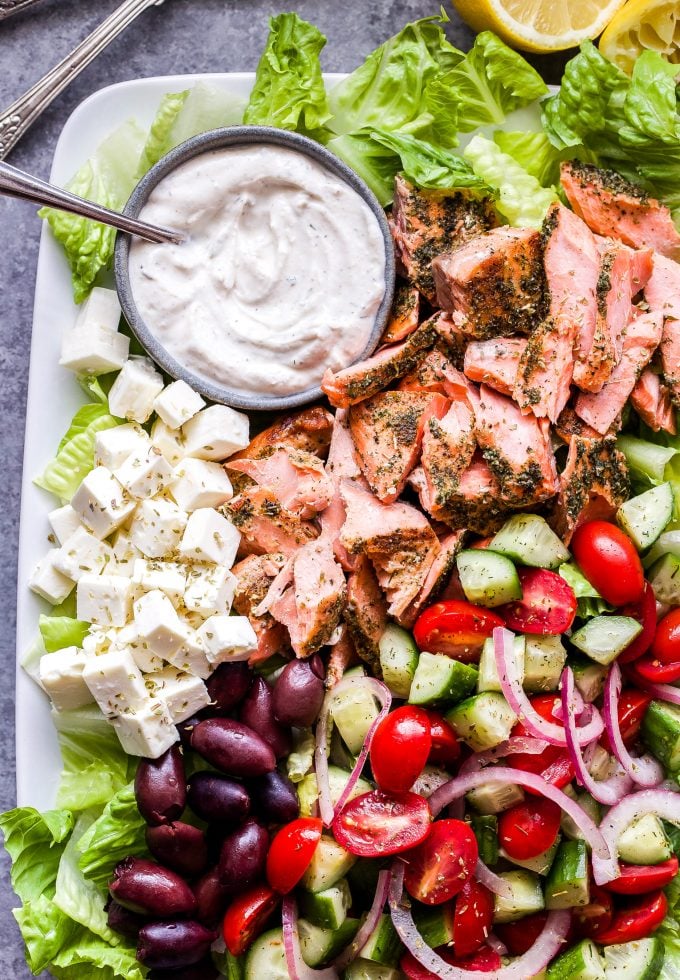 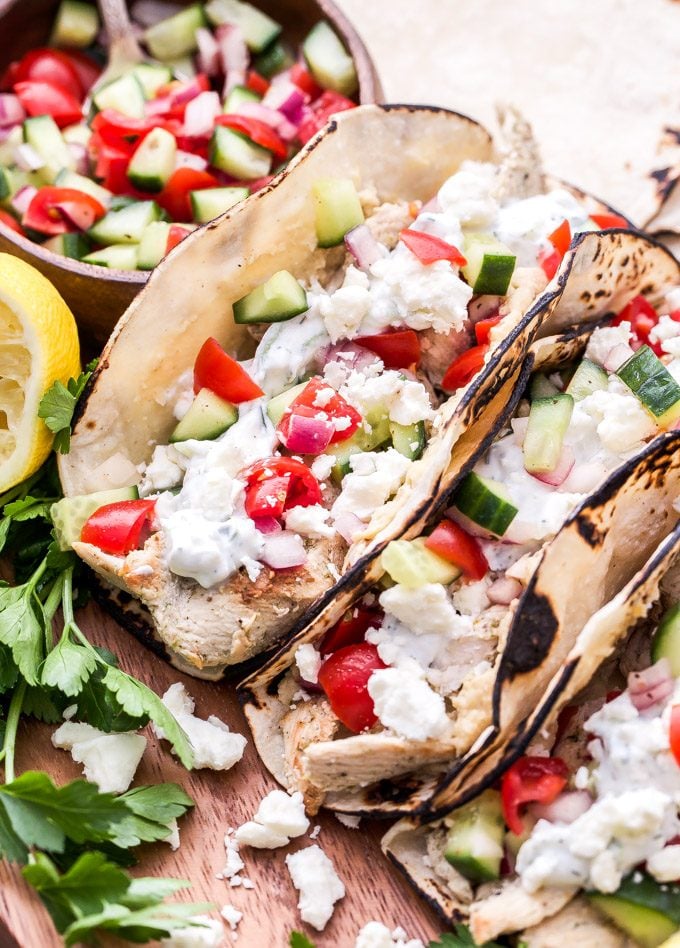 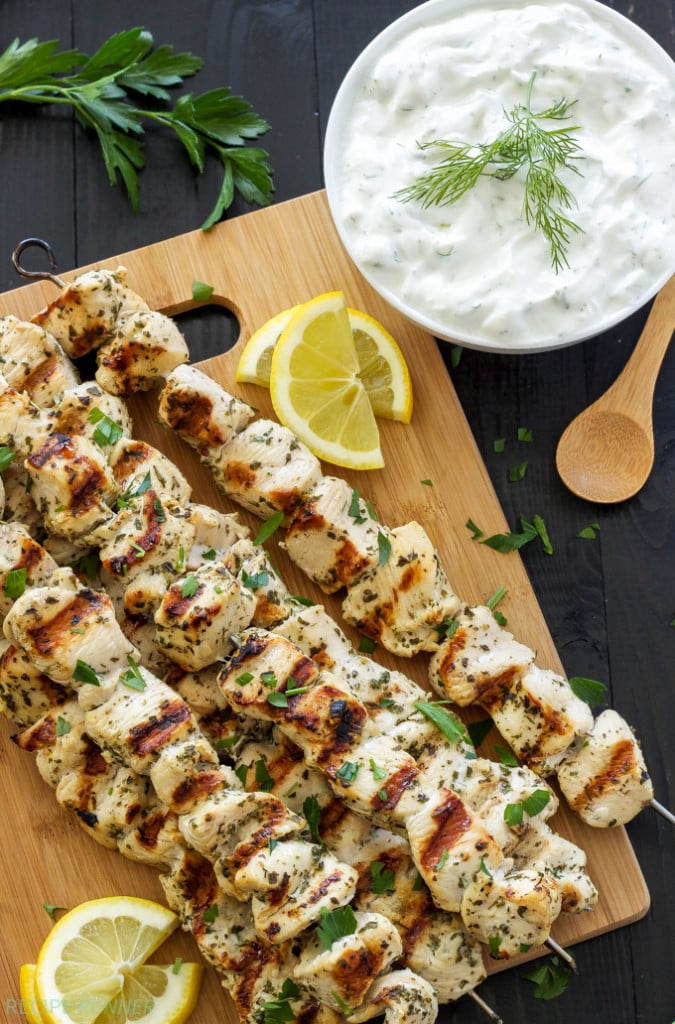 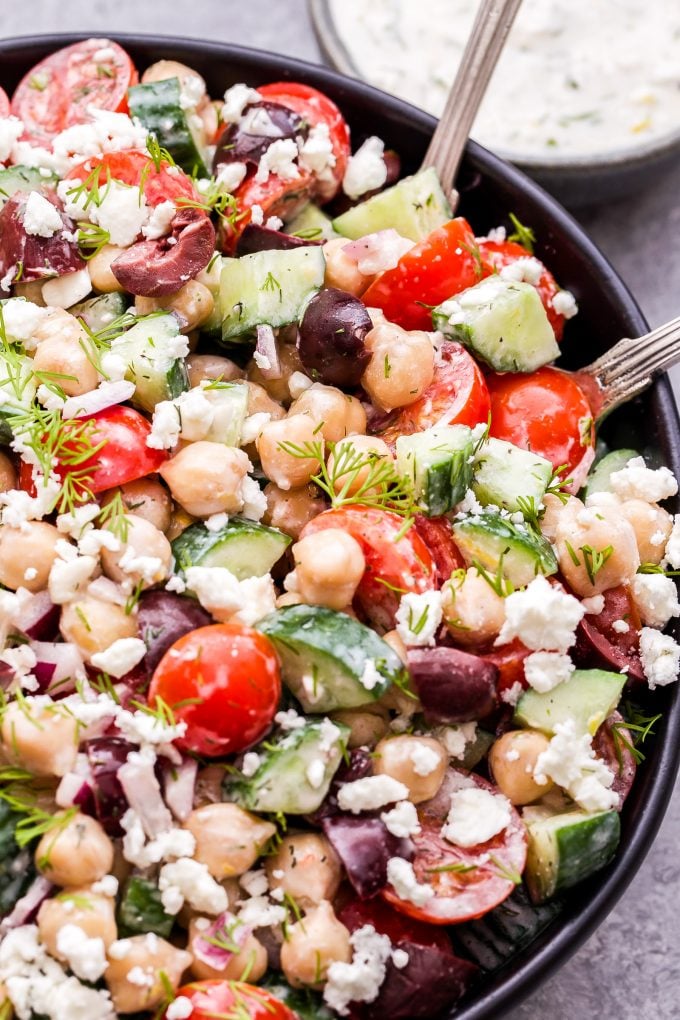 This website uses cookies to improve your experience while you navigate through the website. Out of these, the cookies that are categorized as necessary are stored on your browser as they are essential for the working of basic functionalities of the website. We also use third-party cookies that help us analyze and understand how you use this website. These cookies will be stored in your browser only with your consent. You also have the option to opt-out of these cookies. But opting out of some of these cookies may affect your browsing experience.
Necessary Always Enabled
Necessary cookies are absolutely essential for the website to function properly. These cookies ensure basic functionalities and security features of the website, anonymously.
Functional
Functional cookies help to perform certain functionalities like sharing the content of the website on social media platforms, collect feedbacks, and other third-party features.
Performance
Performance cookies are used to understand and analyze the key performance indexes of the website which helps in delivering a better user experience for the visitors.
Analytics
Analytical cookies are used to understand how visitors interact with the website. These cookies help provide information on metrics the number of visitors, bounce rate, traffic source, etc.
Advertisement
Advertisement cookies are used to provide visitors with relevant ads and marketing campaigns. These cookies track visitors across websites and collect information to provide customized ads.
Others
Other uncategorized cookies are those that are being analyzed and have not been classified into a category as yet.
SAVE & ACCEPT
Skip to Recipe
17611 shares